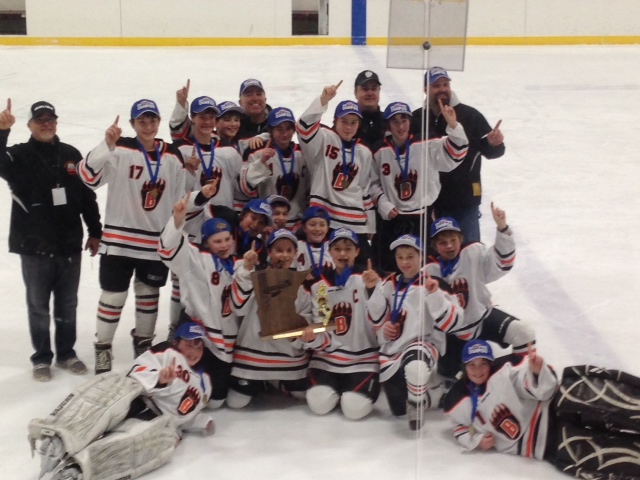 State Champs!  The White Bear Lake PeeWee B team won the State Championship this past weekend in Two Harbors.  The victory capped off a great season for an amazing group of kids.

The Bears finished the season with a 35-10-4 overall record.  The regular season included tournament championships in White Bear Lake and Rochester.  They also took home 3rd place trophies in Cloquet and Maple Grove.  Then the playoff run started…

The Black and Orange opened District 2 play as the #4 seed.  They went on to defeat Highland Central, North St. Paul, and Stillwater to earn the D2 Championship.  In the North Region, they defeated Virginia and Cloquet to set up a match up with their friends to the east, Mahtomedi.  In the most exciting game to date, the Bears prevailed 5-4 in triple overtime to win the North Region Championship and punch their ticket to the State Tournament.

In the State Tournament the Bears opened with a victory over Eagan Blue 7-1, followed by a 3-2 win over a highly skilled and fast Minneapolis Purple squad.  This set up the State Championship game versus pre-tournament favorite Edina White.  The title game was yet another nail bitter with many lead changes.  The game was tied at 4 late in the third when the tenacious and determined Bears took the lead 5-4 with under three minutes to play.  They had to withstand the buzzing Hornets offense over the last two minutes to secure the State PeeWee B Title.  Icing on the cake for an amazing playoff run!