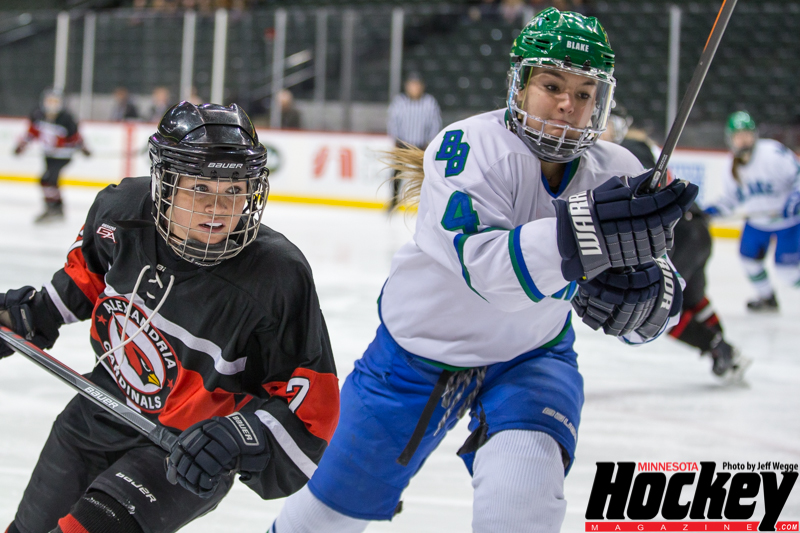 The defending Class A girls hockey champion Blake Bears ran into a stiff challenge from the Alexandria Cardinals in the opener of the Minnesota Girls Class A High School Hockey tournament at Xcel Energy Center in St. Paul, MN.  Seeded #2 in the tournament, the Bears were answered on every level by the Cardinals yet claimed the 3-2 quarterfinal round victory.

The Bears (21-7-1) rode the offensive skills of Carly Bullock who scored her team’s first two goals of the game.  Her first tally came at 2:31 of the first period yet was answered by the Cardinals Melissa Drown who notched her first of two goals on the contest just 1:04 after Blake’s first goal to tie the game.

In search of their fifth state title and second in a row, the Bears converted on a power play at 12:23 of the second period.  It was  Bullock’s heady play from a rebound off the end wall from a Lilia Everson shot that gave the Bears the 2-1 lead.

The goal continued Bullock’s goal scoring dominance as she netted her second of the game giving her 47 on the season.  The sophomore right wing has scored 39% of the Bears goals this season.

The Bears played a difficult schedule this season that included games against top Class AA teams and posted an 8-5-1 record in 14 contests.  Close games have been the norm for the Bears and have a  9-5-1 record in games decided by two goals or less including this one.  Facing the tightened game by the Cardinals did not faze the Bears approach as they fought through the battles and went into shutdown mode out-shooting the Cardinals to 18-3 in the final period.

The Bear surge was rewarded on sophomore Sylvie Wallin’s 4th goal of the season.  She scored from the right point off a wrist shot that was wired past Alexandria goalie Amy Jost for the 3-1 lead at 11:51.  The goal would stand up as the game-winner for the Bears.

The Cardinals fought back and on the ensuing face-off after the Wallin goal, Drown scored her second of game and 24th of the season from behind the Blake net to cut the lead to 3-2 on her team’s second shot of the period just :28 after Wallin’s marker, setting up an entraining finish.

Bears goaltender Anna Kruesel improved her record to 18-7-1 on the season and turned aside 15 Cardinal shots.  Jost made 33 saves in a fantastic effort.  The Cardinals head to the consolation bracket while the Bears advanced to the semifinal round on Friday.