Beaten But Not Defeated 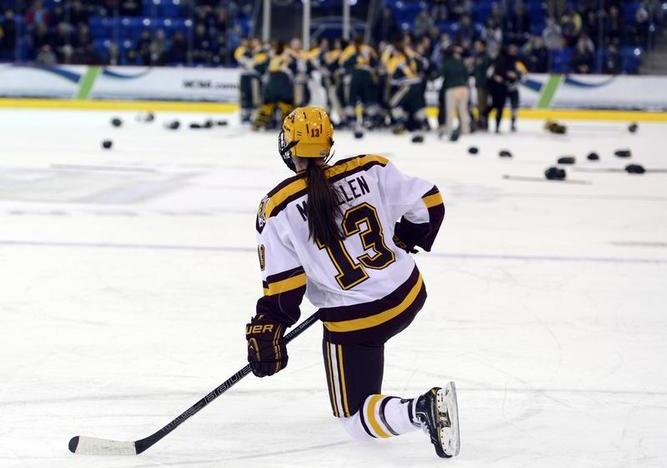 The University of Minnesota’s women’s hockey team arrived in Hamden, Conn. with a golden opportunity to win its third straight national championship and sixth overall (including its 2000 AWCHA title).

But the Golden Knights of Clarkson are the ones heading home with the hardware—and the school’s first-ever Frozen Four title—after a 5-4 win over the Golden Gophers on Sunday afternoon at Quinnipiac’s High Point Solutions Arena at the TD Bank Sports Center.

Clarkson’s win for the ECAC snaps the WCHA’s 13-year hold on the women’s national hockey championship with Minnesota Duluth winning five and Minnesota and Wisconsin each claiming four to its credit.

The heartbreaking loss caps off yet another remarkable season for Minnesota, however, as the Gophers finish with a 38-2-1 record and entered the title game riding a 26-game unbeaten streak. In fact, Minnesota has now won 87 of its last 90 games (87-2-1) encompassing its two-year reign as national champions.

With its five-goal effort, Clarkson became the first team in over two years to score more than three goals against Minnesota since Ohio State managed to do so in a 7-4 loss to the Gophers on Feb. 11, 2012.

“We talk all the time about what success is,” Minnesota coach Brad Frost said. “It’s easy to say what success is when you’re winning, but success for us is the embodiment and fulfillment of our values of being tough, grateful, disciplined and devoted.

“Hopefully we win a lot of games along the way – and we did. Unfortunately, we didn’t win the biggest one here, but our kids were successful. They were so successful this year. Our culture and are team are just awesome. I’m so proud to be a part of it.” 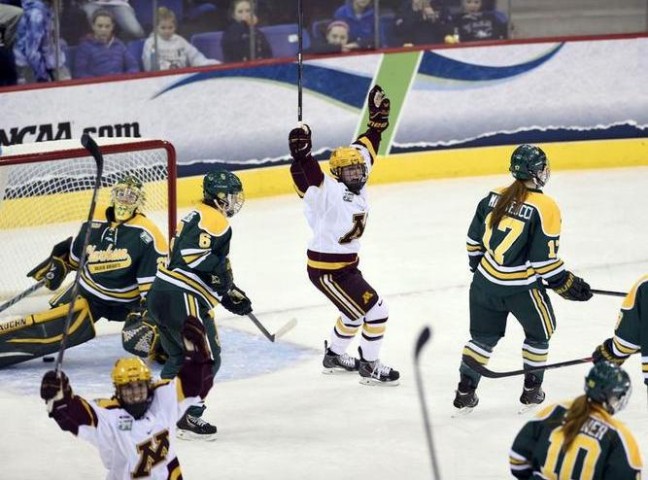 After rallying back twice from being down a goal in Friday’s semifinal against Wisconsin, Minnesota  faced a pair of two-goal deficits against Clarkson, of which it would only recover from one.

“It’s a game of momentum shifts, and I think there was a lot of that tonight,” senior Bethany Brausen said.

The Golden Gophers and Golden Knights (31-5-5) entered the third period even at 3-3 but Clarkson’s Vanessa Plante and Shannon MacAulay scored 4:12 apart to give CU a 5-3 lead with 4:16 to play.

Minnesota responded 35 seconds later on Gillanders’ sixth of the season but that’s as close as the Gophers would get in dropping just their second game of the season.

For seniors Kelly Terry, Sarah Davis, Baylee Gillanders and Brausen, this was not how they envisioned concluding their Gopher careers. But Terry, for one, looked beyond the final game to a tremendous body of work.

“We can’t be distracted by losing the last one,” Terry said. “We’ve had a great season and a great four years here.”

The Gophers got on the board first on Davis’ 20th goal of the season midway through the first period after she was tossed from the faceoff dot in the Clarkson zone. Rachel Bona replaced her and won the draw to Davis in the slot who lifted a backhand shot past Golden Knights goaltender Erica Howe at 9:40.

Minnesota appeared poised to carry that 1-0 lead into the second period, but the Golden Knights had other plans as Christine Lambert drew Clarkson even at 18:37. The goal ignited an explosive 2:01 stretch over two periods which left the Gophers trailing 3-1. 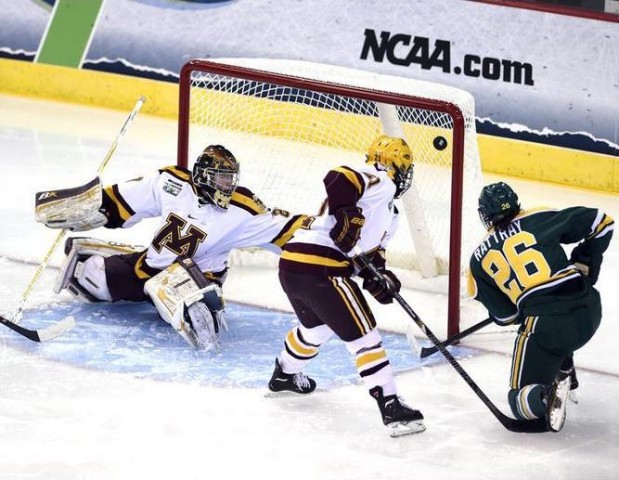 Shelby Nisbet gave Clarkson its first lead at 19:40 with Howe pulled for an extra attacker with a delayed penalty coming to Minnesota’s Rachel Ramsey for hooking. With Ramsey in the box to begin the second period, CU’s Patty Kazmaier Award winning forward Jamie Lee Rattray put the Golden Knights up by two just 38 seconds into the middle stanza.

As they had against the Badgers, Minnesota rebounded quickly and the game was tied 7:18 later on Maryanne Menefee’s 18th of the year and Bona’s 23rd.

Frost summed up the Gophers’ outstanding season perfectly in just one poignant sentence.

“Tonight the big scoreboard said that we lost, but we won all season long.”