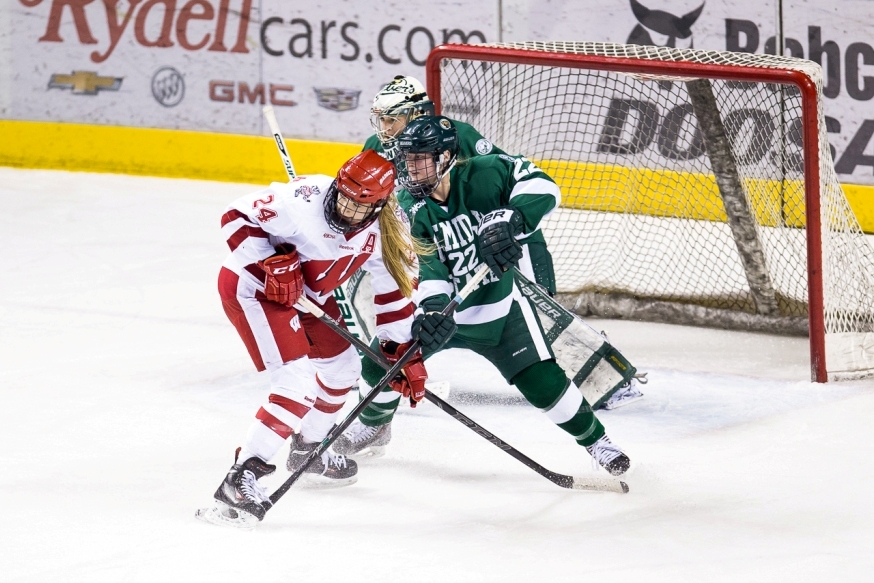 Led by another big offensive performance from Sarah Nurse, the Badgers scored a goal in every period of play this weekend en route to winning the WCHA championship.

“Overall, it was six good periods of hockey against two strong opponents who had great seasons and we’re happy to take the trophy back to Madison,” Wisconsin coach Mark Johnson said.

Under first-year head coach Jim Scanlan, the Beavers were playing in their first-ever postseason championship game, but came up just short of capping off their run with a title.

“To play in a championship game is something that I’m sure in Vegas, the odds were pretty astronomical [for us],” Scanlan said. “We’re extremely proud of what we’ve done this year.”

After the Badgers scored in the first period yesterday against UND, Nurse opened up an early lead once again for her team, about seven minutes into the game. Bemidji State earned a power-play chance immediately after, but the Wisconsin defense held them off to stay ahead.

Nurse then doubled the lead for the Badgers with 7:20 remaining in the first. She capitalized on some extended pressure for her team, scoring her fourth goal in the last two periods of play.

“Our whole team’s playing well,” Nurse said when asked about her offensive spark this weekend. “We have a ton of energy. We’re really excited to be on the ice every single shift and I think just feeding off the energy from the team, it’s really helping all of our games.”

Getting on the board so quickly once again seemed to give the Badgers a boost.

“We built off what we did yesterday,” Johnson said. “We beat a strong North Dakota team in their building and you want to come out with the same energy and start the game the way we finished it off last night, and we were able to do that again.”

Despite being down by a couple of goals early on in the game, Scanlan said that his team’s mindset never changed.

“We talked about the next one being a big one,” he said. “We tried to continue to do the things that were going to allow us to be successful, to get pucks to the net. I know (junior forward) Steph Anderson had a great opportunity in the slot and one of their players got in front of it to block it.”

After outshooting the Beavers 12-4 in the first period, Wisconsin continued to bring the pressure in the second, and BSU goaltender Brittni Mowat came up with several key saves. But having that early lead to work with ended up making a big difference for the Badgers.

Karley Sylvester, a native of Warroad, Minn., broke through for Wisconsin again with 2.4 seconds left in the frame, making it a 3-0 game heading into the third period. Sylvester jabbed at the puck in a scrum in front of the net and finally knocked it in past Mowat.

“All my linemates and the defense were working hard to get the puck to the net and luckily I got my stick on it and it went through the goalie’s legs,” Sylvester said. “As the team that gets the goal, it’s huge. You get to come in the locker room with a lot of energy and you kind of have to settle everyone down after that and say, ‘Hey, there’s still another period to go,’ but that was a big goal.”

Wisconsin scored again just four minutes into the final period to silence the Beavers’ hopes of building a comeback. Nurse worked a 2-on-1 with Katarina Zgraja, and the puck deflected off of Mowat’s skate and in.

In all, Nurse scored four goals and six points this weekend and was named the tournament’s Most Outstanding Player for her efforts.

“It’s nice that she gets rewarded,” Johnson said of Nurse’s play this weekend. “It was probably a month ago, she was getting the same type of opportunities and for whatever reason the puck wasn’t going in. She kept pushing herself and creating opportunities, and this weekend played very well and was a big factor in why we won the tournament.”

Coming into the season, Scanlan said that he didn’t really set many expectations for his new club in his first year at the helm.

“It was all new to me,” he said. “I just hoped that we could put a team on the ice that people in the Bemidji State community would want to come and watch. From that standpoint I certainly thought we far exceeded expectations.”

The Beavers will end the 2014-15 season just one game short of the national tournament with a program-best record of 21-17-1.

The Badgers, who have not played for a championship since 2012, captured their first WCHA title since 2011 in the victory. The win meant a lot to the team’s seniors, as they got the chance to play in the Final Face-Off championship game for the first time in their careers.

“To come out yesterday and beat a hard-working North Dakota team, that was big for us,” Sylvester said. “That carried over into today’s game and all the energy we had like Sarah was saying, it’s easy to feed off that on the bench and onto the ice, and everyone came to play today. It’s amazing that we can take this trophy back home with us.”