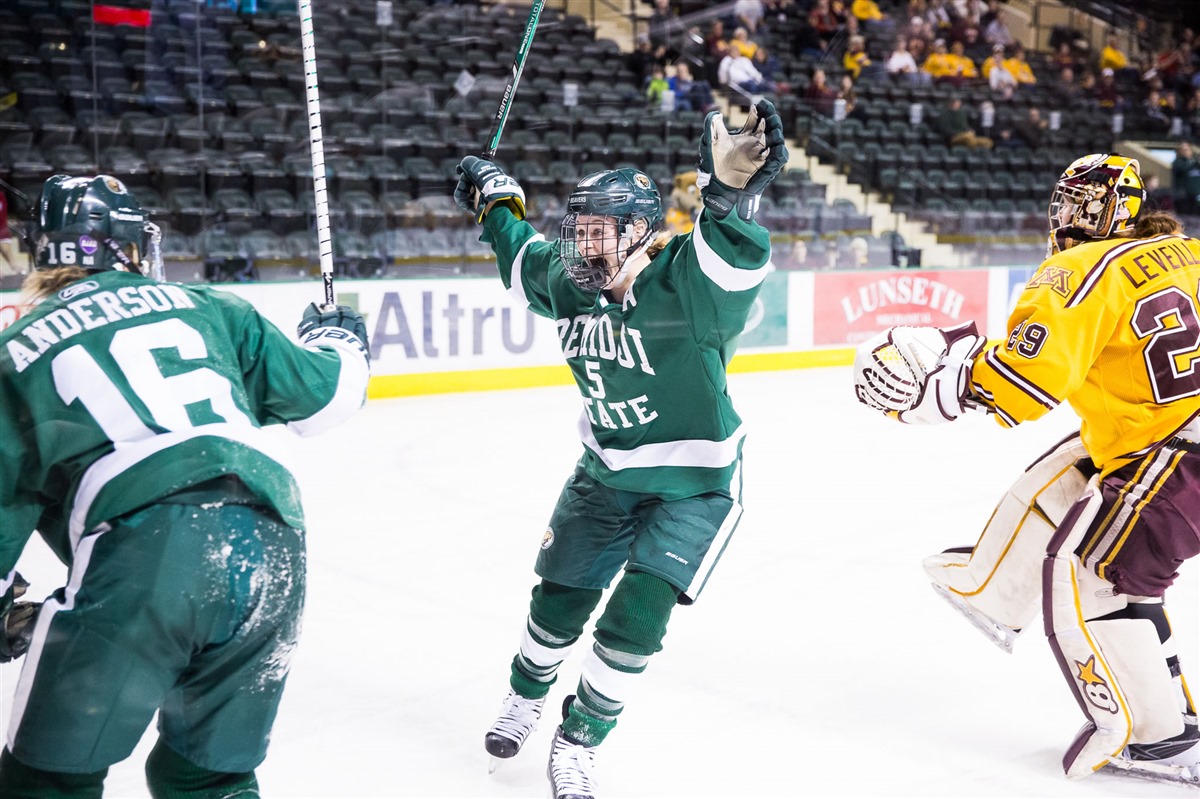 Anderson, who transferred from the Gophers after her freshman season, found the back of the net after 51 minutes of scoreless hockey to help the Beavers (21-16-1) move on to the title game for the first time in program history.

The Beavers have already set program records in conference (13) and overall (21) wins this season. Now they will play for their first postseason championship under their first-year head coach.

“Right away, this team just came together as a group and has great leadership,” Scanlan said. “I just give them all the credit just because everyone’s come every day to work and they work hard and they have good attitudes and it’s been a lot of fun.”

Despite the loss, the Gophers threw 37 shots at Brittni Mowat, but she stopped each one to seal the win for her team. The Beavers’ defense also chipped in with 18 blocked shots in front of her.

“I didn’t think we played a poor game by any stretch of the imagination,” Minnesota coach Brad Frost said. “We had some great chances. When you don’t score, obviously it makes it pretty difficult to win a hockey game. Credit them for blocking shots and some great saves and doing what’snecessary to win a hockey game and advance here in the playoffs.”

After a scoreless first period, Minnesota came out in the middle frame and put up 17 shots on goal, but Mowat turned them all away. The Gophers then went on the power play towards the end of the second period, but still couldn’t get one to go.

“It’s been the same Bemidji hockey for four years since I’ve been here,” Minnesota senior captain Rachel Ramsey said. “Dump and chase, very aggressive, block a lot of shots. They play desperate whether it’s right now or it’s in September. Like I said, you have to give credit to them for how well they played.” 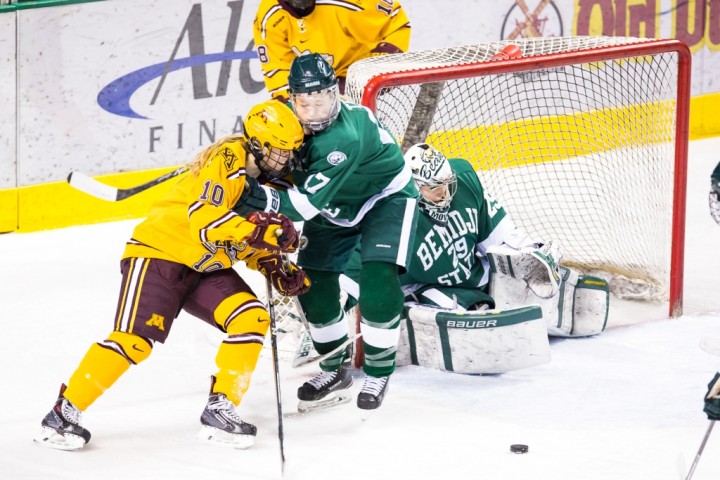 Bemidji State goaltender Brittni Mowat was stellar with 37 saves in BSU’s 1-0 win over the Gophers but deflected credit to her defense for their strong play in front of her. (MHM Photo / Brent Cizek)

Minnesota headed into the third period outshooting Bemidji State by a margin of 27-11. The Beavers stuck to their ways in the final frame, however, clogging things up in the neutral zone and limiting Minnesota’s quality chances.

“I thought our defense played great in front,” Mowat said. “The forwards backchecked hard, and we didn’t give the Gophers too many opportunities, and what they did have, I kind of turned aside and I think a lot of the credit can go to my D.”

Anderson finally broke the stalemate with 8:14 to play in the third period. She carried the puck up into the zone, alone against three Gophers. Anderson made a move to the net and got hauled down, and the puck deflected off of her and into the back of the net.

“I had some space going up towards the end of a shift so I was a little tired,” Anderson said. “They caught up to me and kind of gave my stick a slash and I went down to my right and just the way I was spinning, it hit my shin pad and it went in five-hole. So it was just a lucky bounce and we’ll take it.”

The officials initially reviewed the goal, but the call on the ice stood.

“There was no kicking motion whatsoever by the Bemidij player on the ice,” WCHA head of officials Greg Shephard said after the game. “It was a good goal, that’s what they saw, and that’s how it stands.”

Minnesota had another power-play chance late in the period, but couldn’t pull the trigger on Mowat to tie it up.

The Gophers, now 31-3-4 on the season, will not play for the WCHA championship for the first time since 2008. It was their second loss of the season to Bemidji State, after falling to the Beavers 1-0, back on Nov. 1.

“Obviously that weekend at Minnesota, that was a real turning point for them because they saw, you know what, we can do this, we can compete against these teams,” Scanlan said.

It was just the third loss of the season for Minnesota, who will now await its draw for next weekend’s NCAA Tournament quarterfinal game.

“Just overall, it’s a good lesson for our kids,” Frost said of the loss. “I told them, ‘let it hurt’. This is supposed to hurt. And we’ve got a lifeline next week, knowing that we’re playing, but we’re running out of time to not win hockey games.”

“I’m just happy for the team,” Anderson said. “We’re playing so good this year and we deserve the championship game tomorrow. We played really well today and all year and I’m just happy with how our team played.”