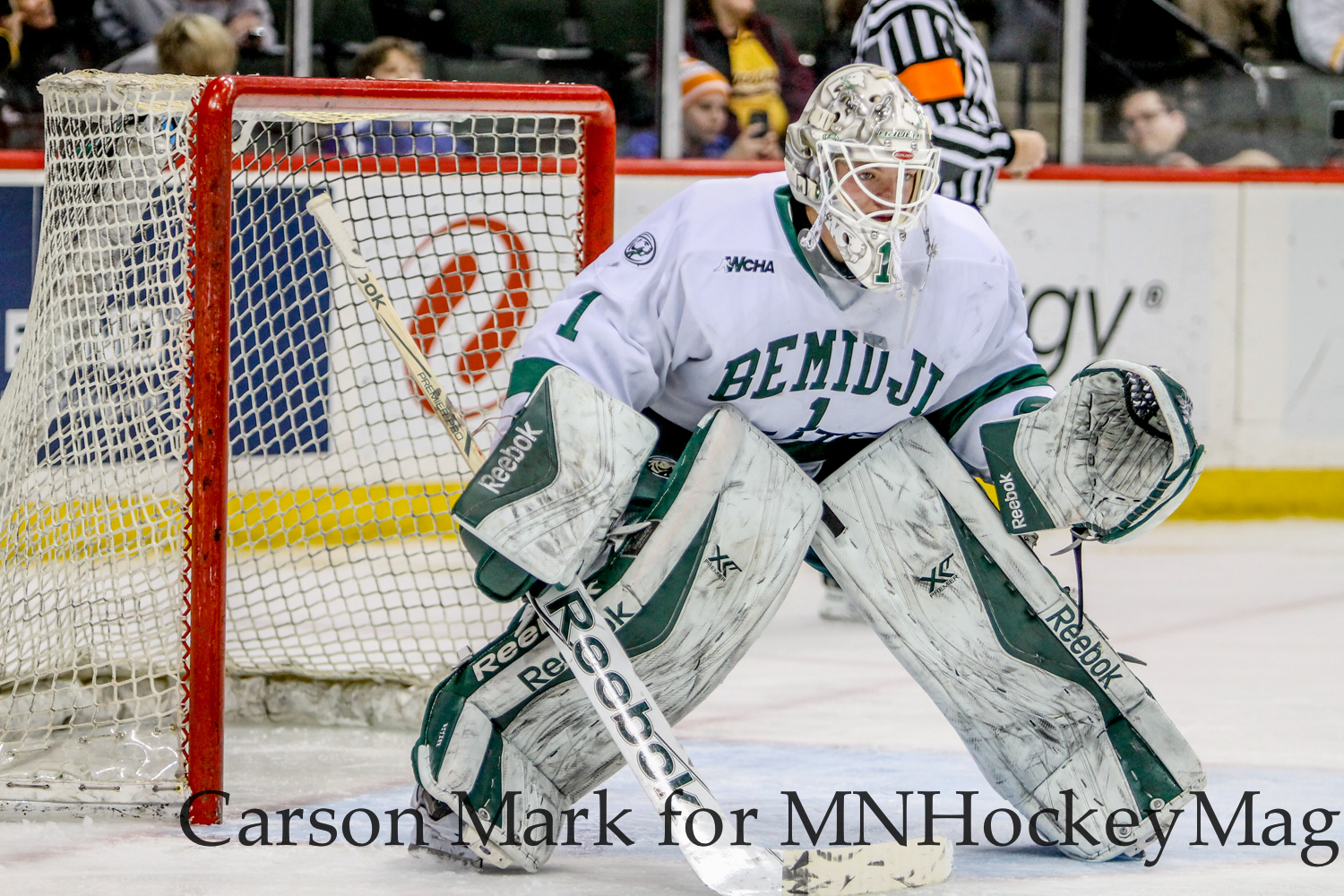 SAINT PAUL – Is there a more appropriate place for a giant wooden trophy to reside than Minnesota’s north woods? If there is it doesn’t matter because that’s where the North Star College Cup is headed after the Bemidji State Beavers chopped down No. 1 Minnesota State 3-1 in Saturday night’s title tilt at Xcel Energy Center in an all-WCHA final.

BSU goalie Michael Bitzer made 26 saves behind a stingy and frustrating Bemidji State defense and the offense chipped in just enough to topple the top-ranked Mavericks in the Beaver’s first North Star College Cup appearance.

“I thought we put together six really good periods of hockey,” Bemidji State coach Tom Serratore said. “I thought we played well in every zone and the guys showed a lot of toughness throughout the weekend and I’m just very proud of them.”

“They were better than us,” Minnesota State coach Mike Hastings said. “They did a real good job of creating offense off our mistakes.”

Bemidji State was clinging to its 3-1 lead with less than eight minutes to play when BSU’s Markus Gerbrandt pulled down Mavericks forward Dylan Margonari with the official immediately signaling penalty shot.

But Bitzer calmly stood his ground on Margonari’s shot and preserved his team’s two goal lead.

“We work on (penalty shots) at the end of every practice every day so, to be honest, I’d almost take the penalty shot over the power play at that point,” Bitzer said.

To which Serratore responded immediately, “I don’t know if I would but ….”

“It’s always nerve wracking because, again, you score on that penalty shot, the whole complexion changes,” Serratore said. “That’s a team we didn’t want to give too much more momentum to because they know how to win.”

Bitzer stopped 54 of 55 shots overall in the tournament in holding the country’s No. 1 and No. 7 teams to one goal. Accordingly, he was named the tournament’s Most Valuable Player.

“He’s an unbelievable competitor and that’s the biggest thing you can say about Bitz,” Serratore said. “He’s a tremendous athlete and he’s a tremendous competitor, so you’re fortunate to have a guy like that.”

“Usually when we play Bemidji, over the years, it’s a one-goal game,” Hastings said. “So if you’re guy can steal one or two, it might give you another life. I thought he did that, he was good tonight.”

The tournament wasn’t Bitzer’s first at Xcel Energy Center. He was an all-state player who went 22-8-0 with a 2.30 goals against average in leading his Moorhead High School team to a state tournament appearance in 2012. He played well, but the Spuds came up short of a title.

“Any opportunity to play here is unbelievable,” Bitzer said. “It’s a great experience and it feels good to finally bring some hardware home.”

Bemidji State used its standard mix of sound five-man defense and opportunistic transition offense to build a 3-0 lead late in the second period on goals by Charlie O’Connor, Gerry Fitzgerald and Kyle Bauman.

But 20 seconds after Bauman’s goal on a partial breakaway at 14:48, O’Connor was called for a rare major interference penalty and giving the Mavericks a hope-inspiring five-minute power play.

The Beavers, however, killed off 4:52 of that before Jon Jutzi’s seeing-eye shot through traffic beat Bitzer with 45 seconds remaining in the second. Despite the late goal, the Beavers felt they were in good shape heading into the intermission.

“With a team like that, with the octane they actually have on that power play, with the abundance of talent, I think even giving up one goal for us was a win,” Serratore said.

Jutzi said the Beavers made it difficult for the Mavericks to carry the puck into the BSU zone with any momentum.

“I think they just did a great job of making us dump pucks,” Jutzi said. “And when we did dump pucks they were first to get to it and they were able to get it out.”

The loss is the first for Minnesota State since Dec. 5 as the Mavericks saw their nine-game unbeaten streak snapped.

“We’ve gone through a long stretch here where we’ve been somewhat successful and sometimes you need to hit the reset button,” Hastings said.

Serratore, on the other hand, has no use for a reset button after the weekend his team had.

“You take a look at the field, three of the best teams in the country were in this field, and we were fortunate enough to come out of here winning this tournament,” Serratore said. “I think any time you win a tournament, any time you win a trophy, that’s a feather in your players’ caps and you hope you can build on it.”