Beavers to draw on experience to move up in the WCHA. 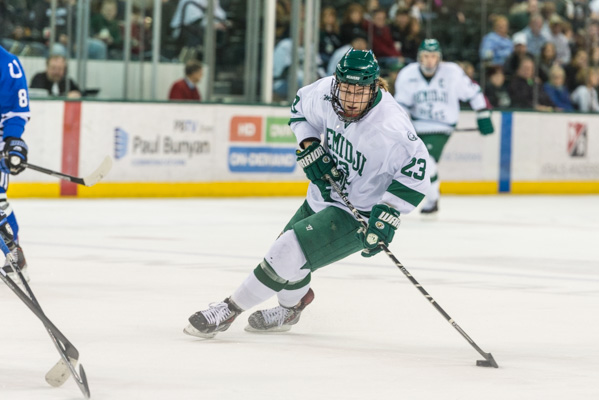 Bemidji State returns its top four scorers from a year ago, among them is junior forward Markus Gerbrandt who had 25 points as a sophomore. (Photo: BSU Photo Services)

Beavers to draw on experience to move up in the WCHA.

Another year older, another year wiser — or at least that’s what Bemidji Sate is hoping for. Last season is one the Beavers are ready to put behind them, but they know they have a few holes to improve upon. In the WCHA coaches teleconference Sept. 29, BSU coach Tom Serratore specifically noted needing to strengthen the power play and work on tipping the scales on their goal differential.

While some work does need to be done, BSU returns mostly intact from last season, losing only four players and adding eight freshmen. The Beavers return their top four scorers, notably junior forward Cory Ward who led the team with 29 points last season and 18 goals. His fellow junior forward Markus Gerbrandt trailed Ward’s effort with 25 points and 15 goals. Senior defenseman Matt Prapavessis will anchor a veteran defensive corps that returns in full, while both Andrew Walsh and Jesse Wilkins return between the pipes.

Overall, Serratore is confident the Beavers experience last year is a solid foundation for their growth this season.

“We feel we can build on the backline, in the net and we feel we have some players who can generate offense,” Serratore said. “We’re also a year older. We were very young last year and we’re experienced this year.

“We really like what we have. We’re a year older, a year better.”

2013-14 Postseason Finish: Lost in WCHA first round to Ferris St.

Why the Beavers will exceed expectations: While they’re still on the younger side, the Beavers return their core group of skaters at each position from a year ago. While their top four scorers will lead the way, they will also have a veteran presence on the blue line and in net.

Why the Beavers will fall short of expectations: They’re young and they have a tough schedule. With a large freshman class and 16 total underclassmen, they’ll be tested early and often as they play 13 games against teams from last year’s NCAA tournament. As Serratore put it: Friday and Saturday night are a lot different from practice.