Bemidji State Seeks to Make a Statement in New-Look WCHA 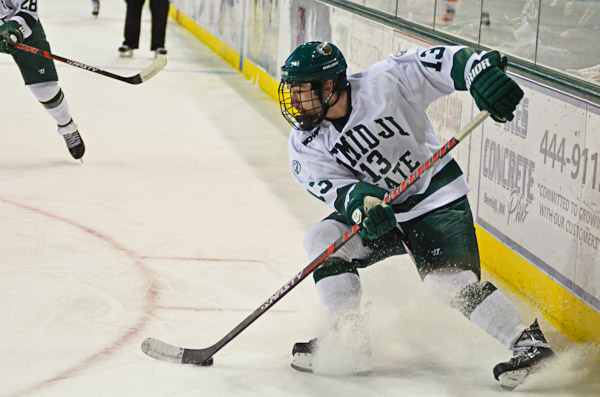 The Beavers will rely on both youth and experience as they face a new and demanding schedule. 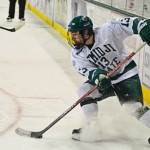 Bemidji State’s 2012-13 campaign came to an end at Minnesota in the first round of WCHA playoffs. That game saw the end of nine players’ careers and the end of one of the lowest win outputs in Beaver history (6-22-8). With 11 new players on the 2013-14 roster, BSU hopes, with a mix of youth and leadership, it can restore its national reputation of being one the most competitive teams in the country.“The biggest thing for us right now is to get everyone on the same page,” Bemidji State coach Tom Serratore stated, “We have to make sure we take advantage of our experienced players because we have a relatively young team.”

One of the biggest questions facing the Beavers is who is going to lead the offense this season. With only 35 goals returning, Cory Ward, a native of Las Vegas, will be the player to look to as he finished his freshman year with nine goals and returns as the Beavers’ top goal scorer.

While the offense is looking to improve, the core strength of the Bemidji State hockey team will continue to be its experienced defensive corps and goaltending. Junior goaltender Andrew Walsh has seen plenty of minutes and finished last season with a .916 save percentage. Junior Captain Matt Prapavessis will provide the leadership at the blue line.

“We feel Matt is going to have a breakout year,” said Serratore. “He is very experienced, he has logged a lot of ice time over the last couple years; he is going to eat up a lot of quality minuets for us this season.”

With a tough schedule and a change in the conference, the Beavers are excited about their opportunity in the reorganized 10-team league. “We are in a conference with a lot of schools that are similar to Bemidji State as far as enrollment goes,” stated Serratore. “They have great tradition, great history, great success at the collegiate level. As far as our schedule goes it is going to be a very difficult and challenging schedule, every game is going to be a dog fight but it is going to be exciting.”

The Beavers kick off the 2013-14 season Oct. 11-12 against ninth-ranked St. Cloud State, a team who is coming off a historic season which saw the Huskies make a Frozen Four appearance for the first time.

Why the Beavers will exceed expectations: Starting with a strong defensive corps, lead by experienced players the Beavers will be able to shut out opponents. The young talented forwards will adjust to college hockey faster than expected and produce the scoring chances they need.

Why the Beavers will fall short of expectations: The young team will struggle to find the back of the net and more pressure will be placed on the defenseman and goaltender to win games.