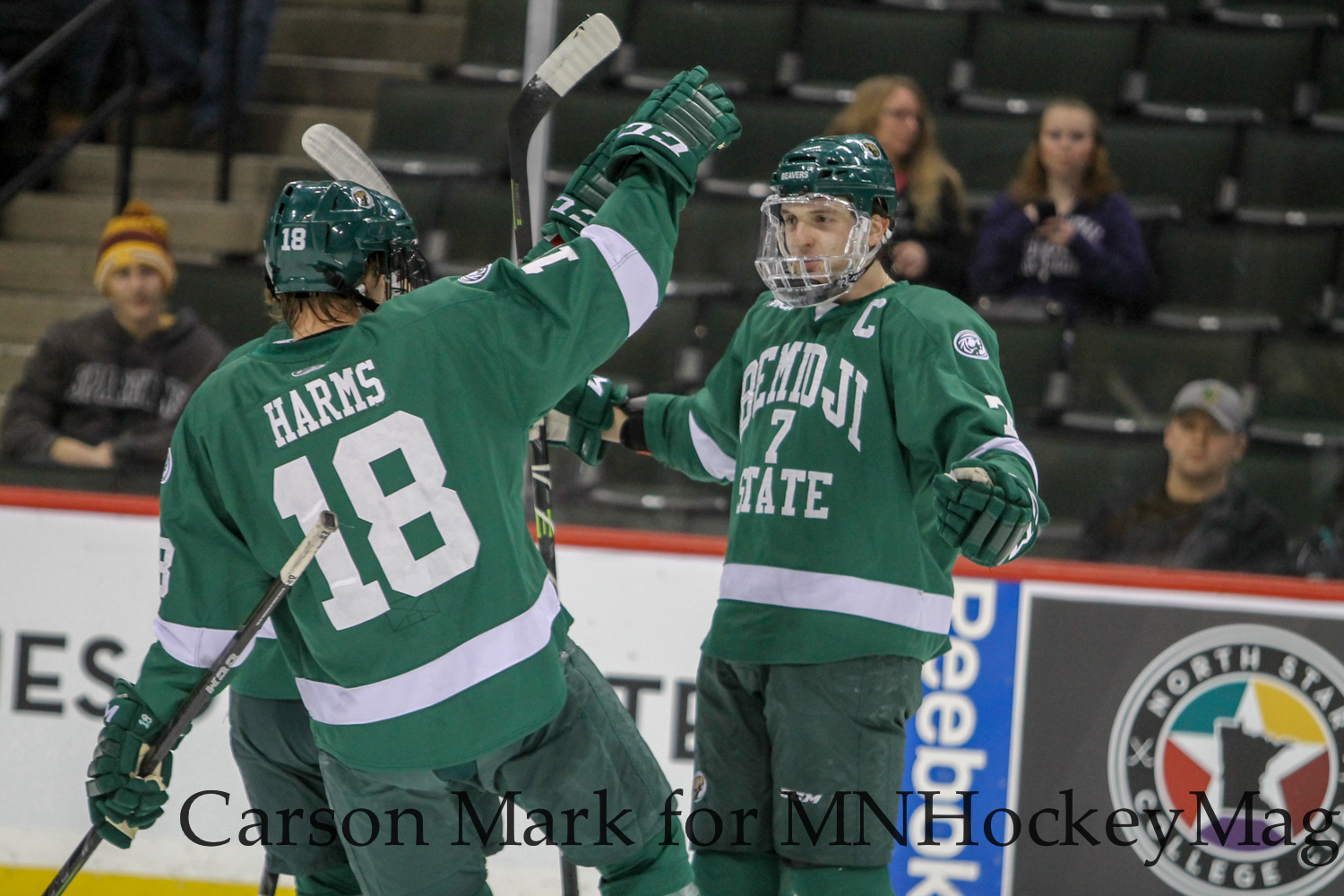 ST. PAUL — Minnesota-Duluth learned the hard way how costly it could be to give Bemidji State the slightest boost of confidence.

BSU’s early goal was big in that regard, but to kill off a five-minute major penalty protecting a one-goal lead was even bigger.

In their first appearance in the North Star College Cup, the Beavers early confidence boost led them to a 4-0 shutout victory against the Bulldogs in the first semifinal game of the tournament Friday evening at the Xcel Energy Center.

“For these kids to play in this to be able to play in this venue and come down here, all of that hype and tournament atmosphere is really important to the experience for our guys,” Beavers coach Tom Serratore said.

But Bemidji’s resilient penalty kill units never allowed Duluth to set up its power play. As a result, the Beavers cleared the zone more times than the Bulldogs put shots on goal.

BSU, which ranks in the bottom half of the country in penalty kill, escaped the major penalty unscathed.

“We all know about the momentum swings of a five-minute major and all you need is one (goal) and the whole complexion of the game changes,” Serratore said. “By us killing that off, it put a feather in our cap. That’s how you build confidence.”

“That was a game changer,” BSU defenseman Sam Windle added. “There was a lot of pressure on us with a guy in the box for five minutes. It was huge to get that done and keep it a one-goal lead for us.”

BSU continued to score goals, adding one in the second period by Leo Fitzgerald and two more in the third from Windle and Kyle Bauman. While they piled on the offense, the Beavers continued to stifle the Bulldogs power play.

The Beavers killed off all five of their penalties — a total of 13 minutes of UMD power play time — and kept UMD to six shots on the man advantage.

BSU has allowed five goals in the last five games, including three shutouts.

Not to be left out was the play of freshman goaltender, Michael Bitzer, who last played at the Xcel Energy Center in the 2012 Class 2A state tournament. The young netminder finished with a career-high 28 saves.

“Our D played unreal out there, blocking shots,” Bitzer said. “It makes my life a lot easier and they kept shots to the outside. I didn’t have to make too many tough saves.”

Bemidji State advances to the championship game against the Minnesota State, with a 7 p.m. puck drop Saturday night. The Bulldogs will face the Gophers in a matinee meeting at 4 p.m.

“I’m nervous about having to play either one,” Serratore said, between the Mavericks and the Gophers. “The bottom line is we get to play in the night gametomorrow. That’s the biggest thing. It’s not who we’re playing, it’s that we’re playing.”

The victory gives BSU a chance to get back on track after getting swept last weekend at Lake Superior State.

The Beavers started Friday’s game with strong special teams and finished the day with a stick salute to the throng of Bemidji State faithful who made the trip.

“It’s the venue and the overall experience of playing in this beautiful building,” Serratore said. “When you play the other Minnesota institutions, it’s a special game from that perspective.”