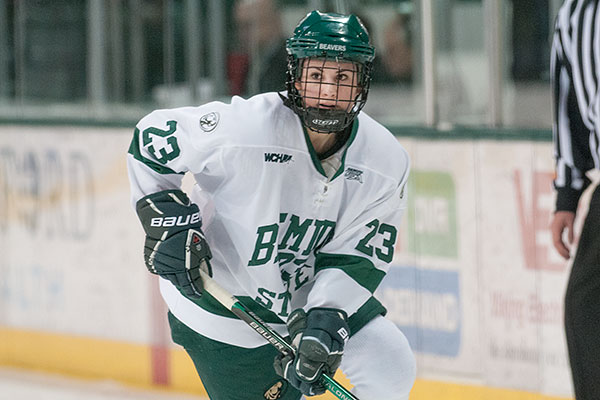 Everything is indeed new at BSU with Scanlan barely three months removed from replacing the retired Steve Sertich behind the Bemidji State bench after previously serving as girls’ hockey coach at East Grand Forks High School. Bemidji State players, both returning and new, must now adjust to their new coach’s message and style of play. There is also the Beavers’ shiny new 2-0 record, a program first, after last weekend’s season-opening road sweep of Robert Morris, a ranked team much of last season.

“It’s kind of a unique situation getting on board so late,” said Scanlan who was hired June 17, long after BSU players had departed Minnesota’s north woods for the summer. “I really didn’t get a chance to meet most of the team until they came up here for the start of the year, other than phone calls and emails and things like that.”

Scanlan credits assistant coaches Amber Fryklund and Shane Veenker with being instrumental in easing his transition. Although BSU players and staff have had limited time together so far, the Beavers have impressed Scanlan early on with their work ethic.

“The girls come to work every day and I’ve got to give a shout out to Steve Sertich for that,” Scanlan said. “I think that’s a direct result of him and what he brought to this program and he certainly recruited every one of these players.

“For all the players, they have a new set of eyes on them so it’s really kind of a fresh start for them in terms of maybe what their role could be.” 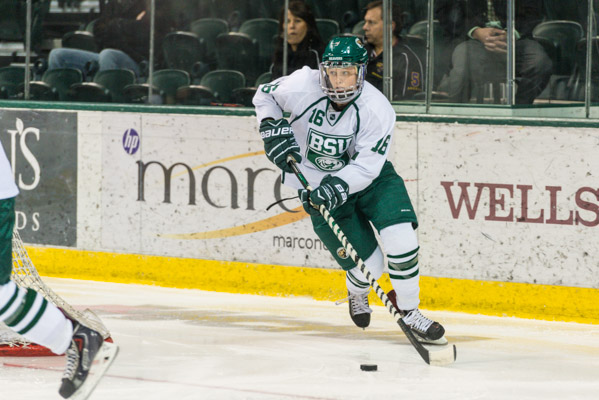 Junior F Stephanie Anderson is a player singled out by BSU coach Jim Scanlan as someone who has stepped up her game early on this season. (Photo / Bemidji State University Athletics)

Scanlan pointed out that his upperclassmen have really stepped forward early on, especially up front as 79 percent of Bemidji State’s scoring is back. He specifically mentioned redshirt junior Stephanie Anderson (North St. Paul, Minn.), who scored twice against Robert Morris last weekend, and junior Kaitlyn Tougas (Thunder Bay, Ont.) who led BSU in points (22), assists (14) and goals (8) as a sophomore and chipped in a goal and an assist of her own against the Colonials.

Questions need to be answered on the blue line where three of Scanlan’s seven defensemen are freshmen. But he’s been impressed with sophomore Carley Esse (Cloquet, Minn.) whom he labeled an intelligent player who plays to her strengths and says the Beavers will be counting on junior Ivana Bilic (Coquitlam, B.C.) to play a lead role on defense.

“She’s got tremendous skills and she could certainly be an [All-WCHA] type of player for us,” Scanlan said of Bilic, whose two assists and +4 plus/minus rating against RMU have already earned her WCHA Defensive Player of the Week honors.

Scanlan said last week he also intends to give redshirt freshman G Erin Deters (Sartell, Minn.) some playing time this season, a pledge he has already made good on just two games into the season. Deters made 29 saves in her collegiate debut in Saturday’s 3-1 over Robert Morris.

“Ideally, if you have two goalies you can count on that certainly helps,” Scanlan said. “But at some point and time obviously you need a No. 1 and when that time comes, we’ll certainly settle on that.”

Scanlan says it has been fun to witness, in such a short amount of time, the way his freshmen have acclimated themselves and blended with the upperclassmen under their positive leadership.

“They’re coming together as a team and for us to be successful that’s going to be first and foremost because, obviously, the league is the best in the country — some outstanding teams, some outstanding coaches — so we know that every single night it’s going to be a battle but we’re looking forward to it and we’re excited to get started.”

BSU opens its 2014-15 home schedule this weekend with a rare split series against University of Vermont and Rensselaer Polytechnic Institute (RPI).

Why the Beavers will exceed expectations: The players buy into what Scanlan is selling and BSU’s veteran forwards build on their production from last season while Mowatt has another solid season between the pipes.

Why the Beavers will fall short of expectations: With a 35-game schedule which includes 22 contests against teams that were ranked in the USCHO.com national poll last season, the Beavers’ inexperienced defensive corps will be put to the test on a regular basis.