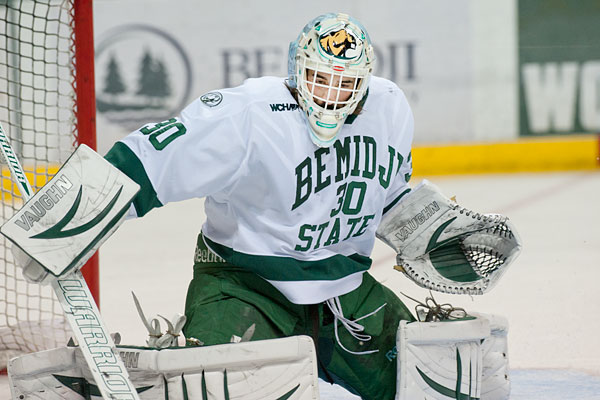 If Bemidji State’s Andrew Walsh did not completely quell any doubts that he is the heir apparent to replace Dan Bakala in the Beavers’ net, the sophomore’s play last weekend was certainly a step in the right direction.

After stopping 63 of 64 Lake Superior State shots in BSU’s split with the Lakers at the Sanford Center, the Dawson Creek, British Columbia native garnered the Western Collegiate Hockey Association (WCHA) Defensive Player of the Week award. Walsh allowed just one goal on 39 LSSU shots as Bemidji State fell 2-0 in the series opener on Friday and shut out the Lakers with 25 saves as the Beavers rebounded with a 5-0 win in Saturday’s finale.

This marks the fourth time Walsh has been recognized by the league during his career. He was also named Defensive Player of the Week Oct. 25, 2011 and earned WCHA Rookie of the Week laurels Dec. 13 and again 20 of last season.

In addition to Walsh, the WCHA named Colorado College forward Andrew Hamburg itsOffensive Player of the Week, while Pheonix Copley of the Michigan Tech University earned the WCHA Rookie of the Week award.

Walsh carries a 1-1-0 record with a 0.51 goals-against average and a .984 save percentage into this weekend’s series at Nebraska Omaha as the Beavers open their WCHA season against the Mavericks.