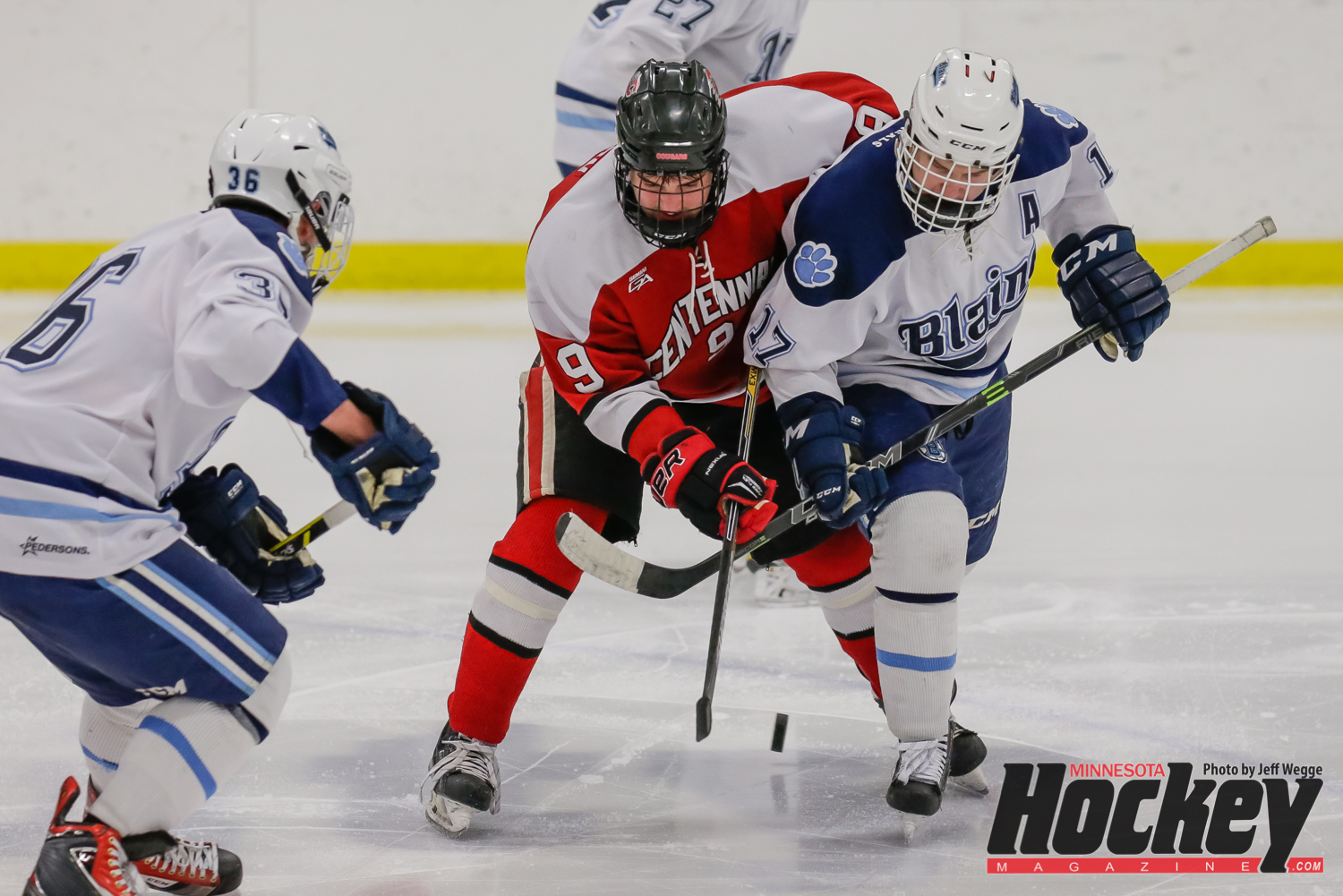 Blaine forward Riley Tufte (#17) had five points (1g, 4a) to lead the Bengals back to the state tournament with an 8-1 win over Centennial in the Section 5AA final at Aldrich Arena. (MHM Photo / Jeff Wegge)

The Bengals (22-5-1) got off to a fast start and poured it on from there to rout neighboring rival Centennial 8-1 in Section 5AA final on Thursday night at Aldrich Arena.

Riley Tufte led the way for Blaine with five points on a goal and four assists while Luke Notermann added three points of his own (1g, 3a). Alex Penn and Easton Brodzinski each scored twice for the Bengals and defenseman Jordan Turnquist picked up a goal and a pair of assists.

Blaine goaltender Jon Kallestad made 18 save to pick up the victory. The win breaks the Cougars’ two-year hold on the section title and earns Blaine its 11th state tournament berth.

Not a bad inaugural season for Blaine first year coach Chris Carroll whose team got off to a 4-3 start.

“We’ve come a long way and I glad they give you 28 games to sort it out because, I tell you, [after] our first game against Roseau I don’t know if I’d have predicted this,” Carroll said. “But that’s an unbelievable ride.”

Carroll replaced long-time Bengals’ coach Dave Aus who stepped down after the 2013-14 season to take the head coaching position at Brainerd. Aus guided Blaine to six straight Class 2A tournament appearances (2006-2011) in 14 seasons at the helm but last season’s senior-laden team was the third consecutive to come up short in section play, falling to the Cougars 2-1.

“I don’t think anybody at the start of the year — when you lose 15 seniors — thought we were that good and I don’t think we got a lot of credit, which was fine because I don’t think we deserved it,” Carroll said. “But those guys in that room wanted to be classified as elite and they had to earn it.”

Blaine swept season series from the Cougars (17-10-1) winning a pair of one-goal games, 5-4 at Fogerty Arena and 3-2 at Centennial so more of the same was expected with so much on the line. But the Bengals had no interest in another nail biter.

A 2-0 Blaine lead after one period turned into a 5-0 lead in than three minutes into the second when Alex Penn, Tanner Vescio and Brodzinski scored just 1:55 apart. Centennial starting goaltender Jonathan Albers was replaced at that point by Nathan Fellows, although Albers returned to play the final period.

“We just kept on battling, we just got pucks to the net,” Tufte said of the second-period barrage. “That was the key message tonight was get pucks to the net and forecheck them hard and I think we did that and things went our way.”

The lead was extended to 7-0 before Centennial’s Colton Berg got the Cougars on the board at 11:28 of the second period. Brodzinski closed out the scoring at 1:34 of the third.

After two years of suffering through friendly gloating from their familiar foes, the Bengals are thrilled for the chance to return the favor.

“It’s everything to us,” Brodzinski said. “Now we can brag a little bit to them. They got a few years but we came back this year and took it to Centennial.”