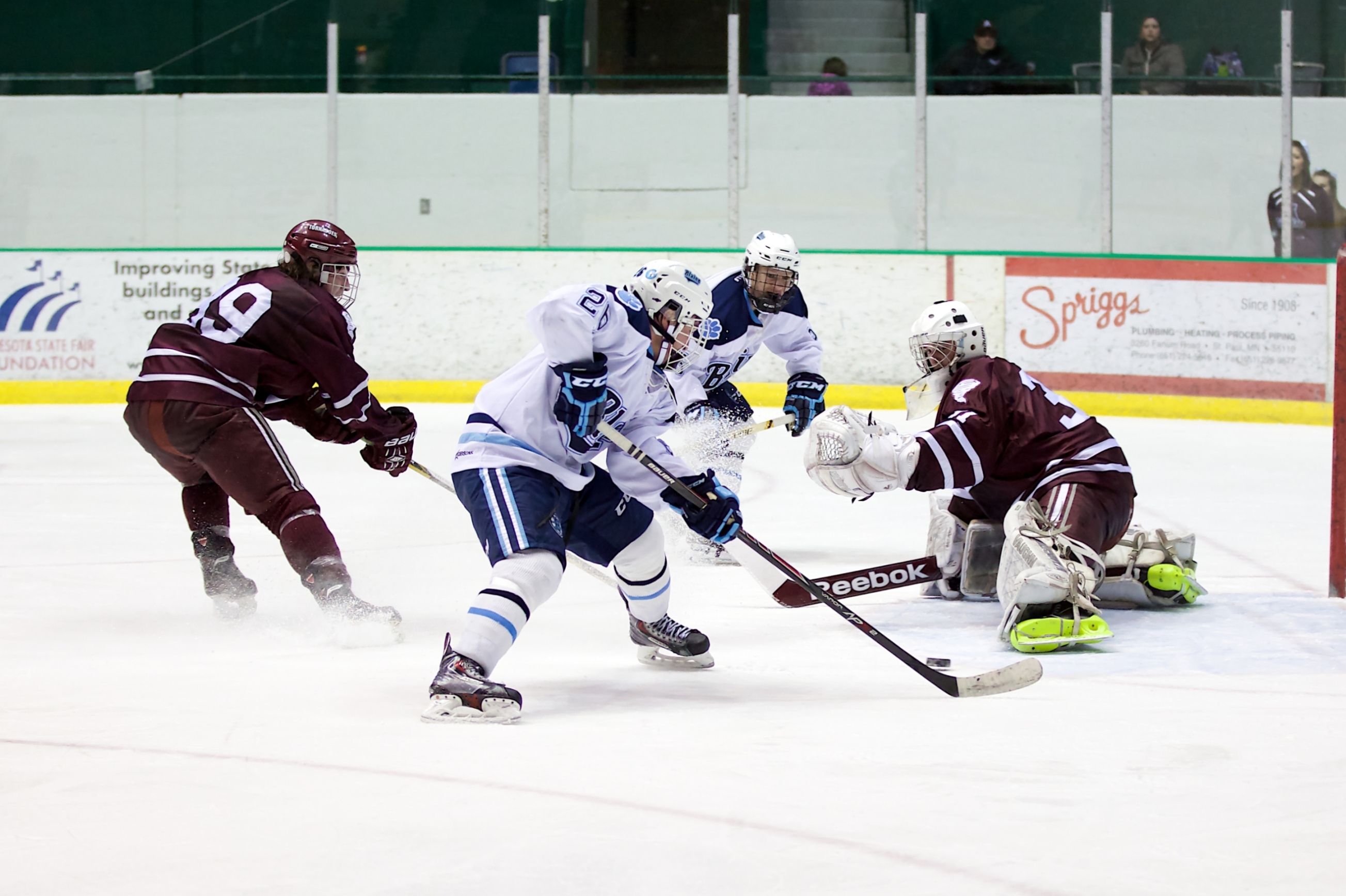 The Bengals threaten as Anoka’s Robbie Goor stretches out the pad in Blaine’s Section 5AA win over the Tornadoes on Wednesday, Feb. 26, 2014 at the State Fairgrounds Coliseum. (Photo / Steven Smart Anoka Sports Photography)

Perennial north-metro adversaries, Blaine and Anoka, took their rivalry on the road to the State Fairgrounds Coliseum on Wednesday in a Section 5AA section semifinal matchup. It appeared to have the makings of a close contest early on, but the top-seeded Bengals pulled away over the final two periods for a 3-0 victory to advance to Friday’s title game against No. 3 Centennial, 4-0 winners over Maple Grove.

Second-period goals by Blaine’s Notermann brothers, Luke and Brandon, broke open a tight game while Bengals goaltender Andrew Houle pitched a shutout with 14 saves. Robbie Goor stood out in the Tornadoes’ crease with 30 saves in a losing cause.

The Bengals entered the Coliseum for the first time since their quarterfinal exit at the hands of Champlin Park a year ago. But Blaine coach Dave Aus said there were no demons for his team to exorcise in their return.

“Everybody talks about that even though they have nothing to do with each other and we’re a much better team, I think, than we were a year ago,” Aus said.

After Anoka trade punches with the Bengals throughout a fairly even and scoreless first period, Blaine began to exert its will over the contest in the second by exploiting its speed advantage over the Tornadoes. The Bengals rattled off the period’s first six shots en route outshooting Anoka 13-2 and taking a 2-0 lead.

“It’s hard to chase guys around the rink a lot and we’ve got guys really on every line that can move,” Aus said. “That’s what we said before the game, we’ve got to use our speed and just try to wear them out and we said it’s not going to be easy.”

Blaine sophomore Luke Notermann broke the scoreless tie with a pretty wraparound goal beating Goor to the left post for his 14th of the season at 10:48.

“That was big because you could just feel on the bench there was some relief,” Aus said. “When that happened then everybody kind of just seemed to settle in and I felt pretty good.”

Not to be outdone, Notermann’s brother, Brandon, pounced on a loose puck in the crease just over two minutes later for the senior’s 13th on the year.

The score could easily have been 4-0 had it not been for Goor’s strong play in the period. The senior netminder made a pair of point-blank saves, first with his left pad on Joey Lau at the 5:10 mark and next with a glove stop on Easton Brodzinski at 16:43.

“We knew that Goor would play well and we didn’t do a great job in the first period, but I thought as the game went on we got better,” Aus said. “He was tough, I mean, he robbed a couple of sure goals.”

As happy as Aus was about the Bengals getting three pucks past Goor, he was most proud of Blaine’s play in its own zone.

“Defensively we get a bad rap but we’ve been very good defense lately,” Aus said. “After the first period we said we want play better in the [defensive] zone and we did that.”