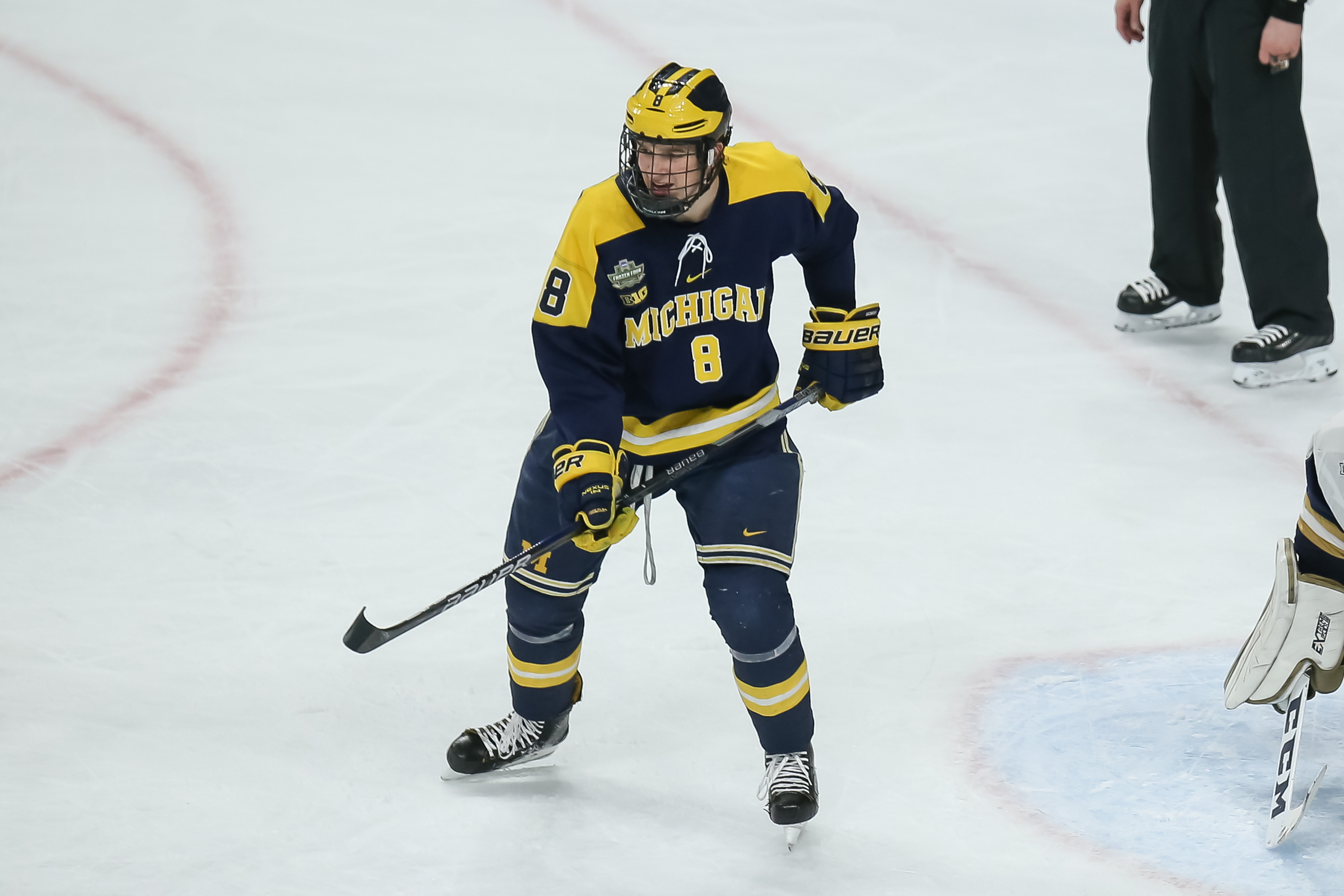 The Wisconsin Badgers haven’t been to the NCAA Tournament since 2014 but that streak could end this season. Wisconsin features a top-heavy blue line which includes Wyatt Kalynuk, who enters his sophomore season as a unanimous selection for the Big Ten Preseason Watch List after posting 25 points as a freshman. Kalynuk isn’t the only defender gathering attention as Hopkins native K’Andre Miller might be one of the most talked about players in the Big Ten. Miller was a first-round pick last June by the New York Rangers and his head coach Tony Granato envisions the blue liner playing a big role in 2018-19.

“He likes playing on our No. 1 power play unit right now,” Granato said. “He’s going to get a lot of minutes. He’s extremely athletic and he’s a little bit raw in the position, he’s just over two years playing as a defenseman. We definitely want him to be an offensive player as well – I think the size and physicality that he’ll be able to play with is something that will make him a strong defensive player. I think he’s going get a good look to make the World Juniors team. So I think what you can expect is an exciting player who will be on the ice a lot for us.”

The defending Big Ten Champion Notre Dame Fighting Irish were picked to finish third in the conference this season after finishing the 2017-18 season as runner-up to the national champion Minnesota-Duluth Bulldogs at the Frozen Four in St. Paul. Junior goaltender Cale Morris staked his claim as the best goaltender in college hockey last season by posting a 1.94 GAA and a .944 save percentage. The First-Team All-American was awarded the Mike Richter Award as the nation’s top goaltender. 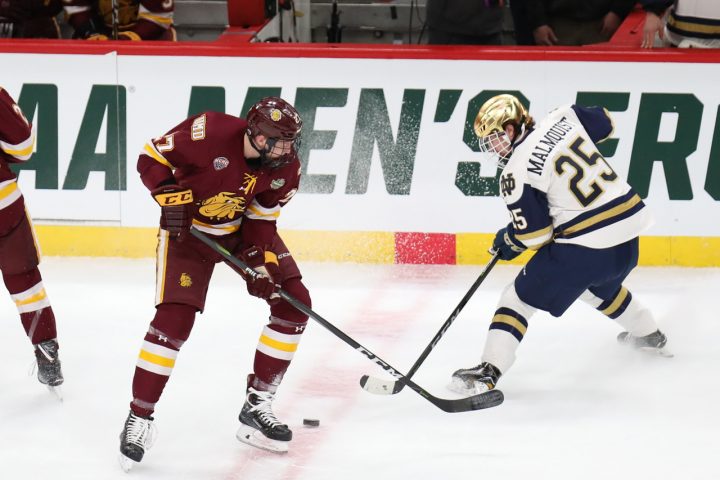 On the offense, Edina native Dylan Malmquist is poised for a big year and the senior was named an alternate captain for the Irish. Notre Dame coach Jeff Jackson says Malmquist had his best season as a junior and thinks he will be a huge factor for the Irish as a senior.

“He’s moving back to his natural position of center so I’m excited about Dylan,” Jackson said. “I think he’s got his head in the right direction; he’s learned what commitment is all about and now hopefully he can take that next step which we’re going to need.”

The Ohio State Buckeyes were able to put it all together last season. Always known for its potent offense, the Buckeyes had stability on the defensive side and in net as they punched their first ticket to the Frozen Four for the first time since 1998. Led by head coach, and Hill-Murray alum, Steve Rohlik, Ohio State is the preseason favorite to win the Big Ten conference in 2018-19. Mason Jobst and Tanner Laczynski were unanimous selections for the preseason watch list. Although he may not light up a box score, Lakeville native John Wiitala is a player to keep an eye on. 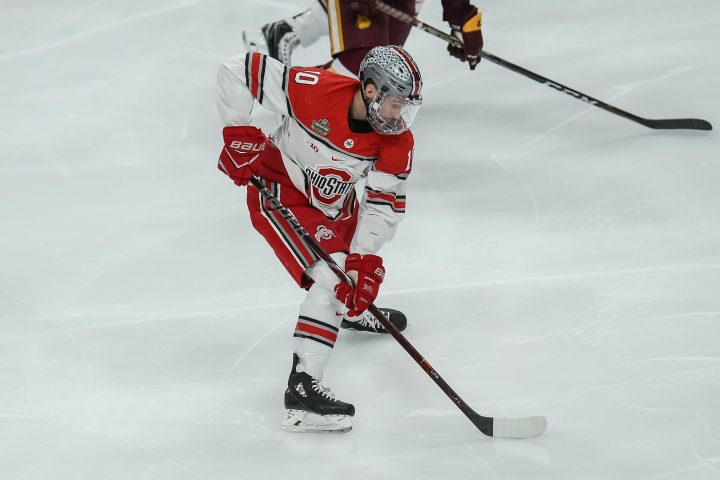 “He’s been put in a lot of situations: he’s killed penalties, he’s been on the power play, he’s played regular shifts,” Rohlik said on the Big Ten conference call. “I think more of his production as a 200-foot player, that’s my biggest thing with him, and right now he’s had a good offseason that I can see. I think he’s going to make some improvements in all areas of his game.”

What a difference a year can make. The Michigan Wolverines made it to the Frozen Four last season after winning just 13 games in 2016-17. Mel Pearson, who took over for the legendary Red Berenson, guided the Wolverines back to prominence and now second-year coach is poised to bring another National Championship back Ann Arbor. Only Boston University and Boston College had a younger roster than Michigan a year ago. With just three seniors on their roster this season, the Wolverines appear to be a threat for years to come. Sophomore forward, and Dellwood, Minn., native Jack Becker, had 15 points in his freshman season but over the course of the year, Becker continued to impress.

“He’s probably our most improved player,” Pearson said of Becker. “What I like about Jack is he does everything the right way. He wants to be a player, he trains hard, he’s an exceptional student and competent student-athlete. But he’s had tremendous growth in his game and we’re just talking the other day, we would like one of Jack Becker on every line just because of what he brings to the table.”

Entering just its seventh season at the Division 1 level, Penn State has already made its mark in college hockey. The team has secured back-to-back NCAA Tournament bids but they did lose top scorer Andrew Strutz. However, most of the offense returns and their 138 goals were the third most in college hockey. Juniors Dennis Smirnov and Nate Sucese were nearly point per game players last season and were named to the preseason watch list.

Michigan State may have been picked to finish last in the Big Ten conference but its top line of Taro Hirose, Patrick Khodorenko and Mitchell Lewandowski is one of the best in college hockey. All three players were named to the preseason watch list. John Lethemon started 34 games last season for the Spartans but he’ll have some competition in highly-regarded goaltender Drew DeRidder who played last season with the U.S. National Team Development Program’s Under-18 Team.