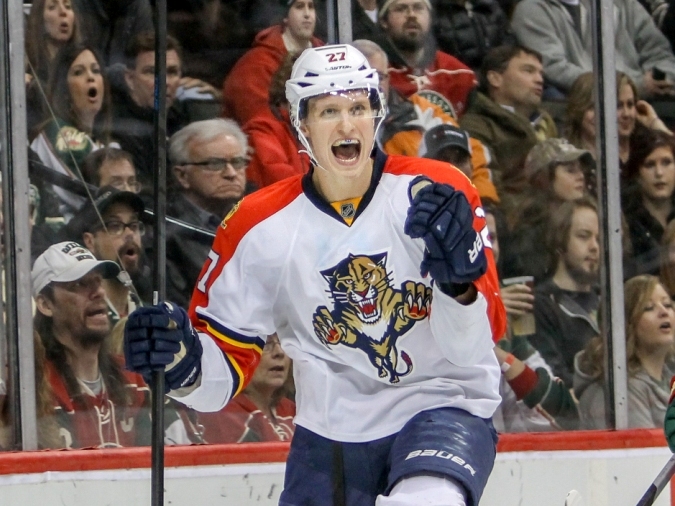 Florida’s Nick Bjugstad celebrates his second period goal but it was all the Panthers could muster against Devan Dubnyk and the Wild in Minnesota’s 2-1 win on Thursday night at Xcel Energy Center. (MHM Photo / Carson Mark)

SAINT PAUL – Florida forward Nick Bjugstad’s return home was a good one for him on the scoresheet.

The Blaine, Minn. native and University of Minnesota alum, wearing a white and red sweater draped in his familiar No. 27, scored his 19th goal of the season midway through the game. It wasn’t the prettiest. Skating down the ice, the 6’6” second year pro got a shot off from below the face-off circle through Wild goaltender Devan Dubnyk and into the net.

Thursday wasn’t a success for him in the standings, however. Instead, the home team got two much-needed points.

Bjugstad’s goal was the only one Minnesota gave up Thursday. The Wild, coming off an overtime road loss to Winnipeg that broke a six game winning streak, held onto a 2-1 lead against the Panthers in the third period to remain hot with its fifth win in six home games.

“Great to have found a way to win a game like that. The game was everything that we had expected it to be,” said Minnesota head coach Mike Yeo about his team, playing for the third time in four nights.

Minnesota got goals from Jason Pominville and Zach Parise while Dubnyk made 26 saves Thursday. Eight of those came in the third period when the Panthers had a four minute double minor and spent the game’s final 79 seconds on the power play.

Pominville got the Wild on the scoreboard 4:12 into the game with his third goal in as many games and 12th on the season. Mikko Koivu, who had two assists Thursday, found Pominville open on the back door behind Florida goaltender Roberto Luongo. Although the puck was deflected off Pominville’s skate, the referees ruled it was not a distinct kicking motion.

“His game has been really good coming out of the All-Star break,” Yeo said about Pominville, who nearly had a second goal in the third period when he hit the post. “He’s been creating a lot of scoring chances, getting a lot of zone time in the offensive zone and just been real solid about that.”

Parise made it 2-0 Minnesota in the second period. With Dave Bolland in the penalty box for cross-checking Mathew Dumba in the offensive zone, Parise needed a second effort to tap the Thomas Vanek rebound into the net with 14:08 remaining in the middle frame before Bjugstad’s goal cut the Wild’s lead in half three minutes later.

Growth or not, the 6’6” Dubnyk stopped late opportunities from Sean Bergenheim, Bjugstad and Jonathan Huberdeau to keep it at a one-goal game .

Just as important was Minnesota’s penalty kill, which went 5 for 5. The Panthers received a four minute power play 3:54 into the third period when Ryan Suter was called for high sticking. Florida was only able to get two shots from the blue line before Aleksander Barkov negated the rest of the advantage with an offensive zone penalty.

With Luongo on the bench in the final minute and Florida having a 6-on-4 advantage, Dubnyk did not allow any second chances.

“That’s big on the penalty kill. You want to eat it up when you can,” he said. “Not just that, but obviously guys get tired working the puck around our end. It just makes everybody feel a little bit better when you don’t have chaos in front of the net so I was fortunate to be in a good spot tonight.”

Minnesota, now with points in each of its last nine games, is two points behind Calgary for the final wild card spot.

Florida, meanwhile, is in a similar position in the Eastern Conference. Memories aside, the Panthers and Nick Bjugstad leave the “State of Hockey” trailing Boston by four points. As nice as the goal was, it wasn’t the souvenir Bjugstad wanted to take back from St. Paul to his new home.