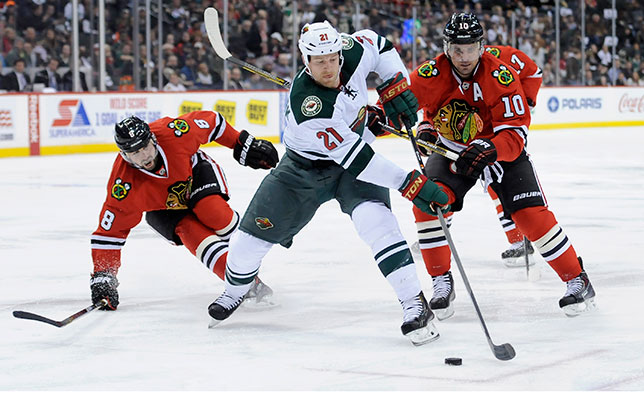 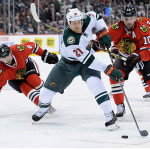 Featured Image:
Minnesota’s Kyle Brodziak looks to get off a shot as Chicago’s Nick Leddy (L) and Patrick Sharp give chase in the Balckhawks’ 5-1 win over the Wild on October 28, 2013 in St. Paul, Minn. (Photo: Getty Images / Bruce Kluckhon)

The Minnesota Wild’s spiffy new white jerseys made their Xcel Energy Center debut on Monday night as the Wild hosted the Chicago Blackhawks in the back half of a home-and-home series which began with a 5-3 Minnesota win on Saturday at Chicago’s United Center. In an effort to treat its 18,685 fans to an in-person look at its road whites, Minnesota inadvertently treated them to a road-like performance in a 5-1 loss to the reigning Stanley Cup champs.

Jason Pominville scored his team-leading seventh goal on the season off of Mikael Granlund’s team-leading eighth assist to tie the game at one apiece midway through the second period. But the Blackhawks scored four unanswered goals including one of the easiest Patrick Kane will ever score courtesy of a slick Brandon Saad behind-the-back pass early in the third which served as the back breaker.

After the first regulation loss at home this season (4-1-2), the team may want to re-think its plan to don the white sweaters again on Feb. 6 when the Nashville Predators visit St. Paul.

The Wild surrendered five goals in a game for the first time this season including three 5-on-5 tallies which is significant in that Minnesota had only allowed five such goals in the season’s first 12 games. Niklas Backstrom made 23 saves but looked shaky and often found himself out of position, although he was far from the only problem.

Mikko Koivu, Matt Dumba and Ryan Suter were each a minus-2 on the night with Koivu and Dumba each on the ice for three Chicago goals. But as Wild coach Mike Yeo said, there was plenty of blame to go around.

“We can’t sit here and look at that game and say that any player is responsible for that loss,” Yeo said. “When you’re playing a team of that caliber, obviously you need a lot of guys not just playing ok games, but playing good games. And I don’t think we had that tonight.”

Dumba played his ninth game of the season which means the Wild have a decision to make in terms of whether to keep him on the roster for the rest of the season or return him to the Red Deer Rebels who own Dumba’s Canadian junior hockey rights. League rules do not allow the Minnesota to assign him to its AHL affiliate in Des Moines.

It’s a tough call for Wild coach Mike Yeo and GM Chuck Fletcher as Dumba has shown flashes of brilliance in his limited time including scoring his first NHL goal and setting up another. However, his penchant for risk-taking, while paying off at times, has often left his youth and inexperience to be exposed, particularly in his final audition.

Another insertion into the lineup means Dumba’s three-year contract kicks in a year earlier than it otherwise might which could also factor into any verdict on the 19-year-old selected by the Wild in the first round (No. 7) overall of the 2012 NHL Draft. On the other hand, Minnesota must consider whether his development would be better served in Red Deer or under the guidance of Wild assistant coaches Darryl Sydor and Rick Wilson.

“I think what’s important for us is to look at what he’s done as a whole,” Yeo said. “Even tonight there were some moments that he made some great plays. What we have to determine right now is where he would fit, does he help us right now and how does it affect his development right now as far as we would use him?”

Dumba, of course, said he is eager to stay and wants to learn from this experience and do, “whatever it takes to get better.” Dumba was candid when asked if the deadline entered his mind.

“I’m not going to say that I didn’t think about it at all because that would be a lie,” Dumba said. “I did put that pressure on myself and I wasn’t really happy with my third period tonight. It is what it is. All I can do is move forward and try to be my best.”

Blackhawks defenseman Nick Leddy, who you may have heard is from Eden Prairie, scored the game’s lone power-play goal at 16:43 of the second period to lift Chicago to a 3-1 lead heading into the third. His slap shot from along the left boards inside the Minnesota blue line beat Backstrom clean through a screen.

“I owe a lot of that goal to [Saad],” the ever-humble Leddy said. “He did a great job in front and took away the goalie’s eyes and I was able to find the back of the net.

“It felt good to finally get that first (NHL goal) here.”

Leddy, who was a plus-2 in 17:07 of ice time, scored his first goal on Minnesota ice since March 7, 2010 when he scored for the Gophers at Mariucci Arena and first at Xcel Energy Center since March 14, 2009 when his goal at 19:03 of the first period helped Eden Prairie to a Minnesota State Class AA title.