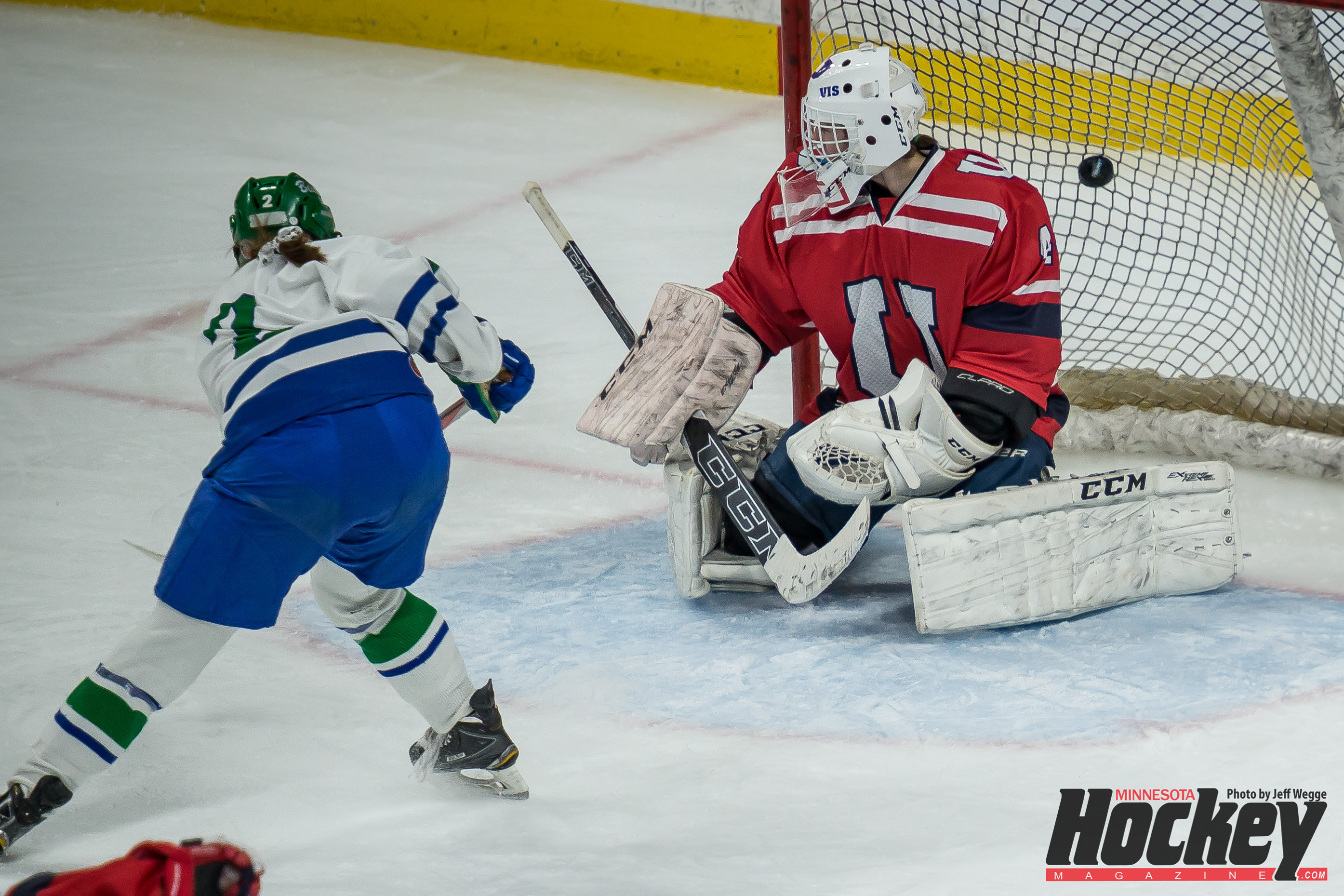 Blake’s Lily Delianedis led a balanced attack with a goal and two assists while Addie Burton, Audrey Wethington, Izzy Daniel and Hayley Konowalchuk added a goal and an assist each. Joie Phelps and Samantha Burke scored goals for United.

Early in the game fans at the Xcel Energy Center looked like they were going to be treated to a back and forth affair that would not be decided until late in the game. Both teams did a good job keeping the puck out of the middle of the ice and through five minutes of play the shots were even at two apiece.

Blake (27-2-1) then made one of their few mistakes of the game. United was able to get a turnover at their own blueline and create a three on one. Phelps – who tallied a hat trick in the quarterfinals – took a feed from Laure Boettcher and found the back of the net to give United (21-7-2) a brief 1-0 lead.

Just three minutes later Blake’s Konowalchuck fired a shot from the right faceoff circle into the net to tie the game.

From that point, the first period belonged to the Blake Bears. They would outshoot United 14 to 4 in the period and take the lead off the stick of Delianedis. Delianedis flipped home a shot while collecting a rebound off of United goalie Jillian Oncay who finished the game with 31 saves.

Blake started the second period where they left off in the first, keeping United to the outside and capitalizing on their opportunities. Two goals less than two minutes apart allowed the Bears to take control of the game. Grace Johnson and Wethington both scored right on the doorstep by banging away right in front of the blue paint. Oncay made a number of saves before both goals, but the Bears’ forwards were relentless.

Defensively the Bears controlled the middle of the ice. The few times United could sustain any pressure in the Bears’ zone, it was always along the boards. Any attempt to get the puck in front of the net was met with a Blake stick and a quick clear to the boards.

“We control the blue line and the middle of the ice,” Blake coach Shawn Reid said. “We just support each other on defense. We talked about working as a team with the puck and without the puck. It is just a philosophy of puck pursuit and puck support and making sure we keep the other team to the outside.”

Late in the second period, Blake scored its fifth goal of the game from their fifth different player when Daniel scored from the right faceoff circle.

“We don’t focus on who is on what line,” Reid said. “We just take a next man up mentality.”

While Blake wasn’t as explosive offensively in the third, up four goals, they didn’t need to be. Like much of the game, the Bears controlled the puck and kept United bottled up in their own zone much of the period. They killed off an early power play and goalie Anna Kruesel, while not having to make many saves, was solid on the 15 shots she faced. In the third, she made her two best saves of the night on that early third-period power play and on a breakaway late in the period.