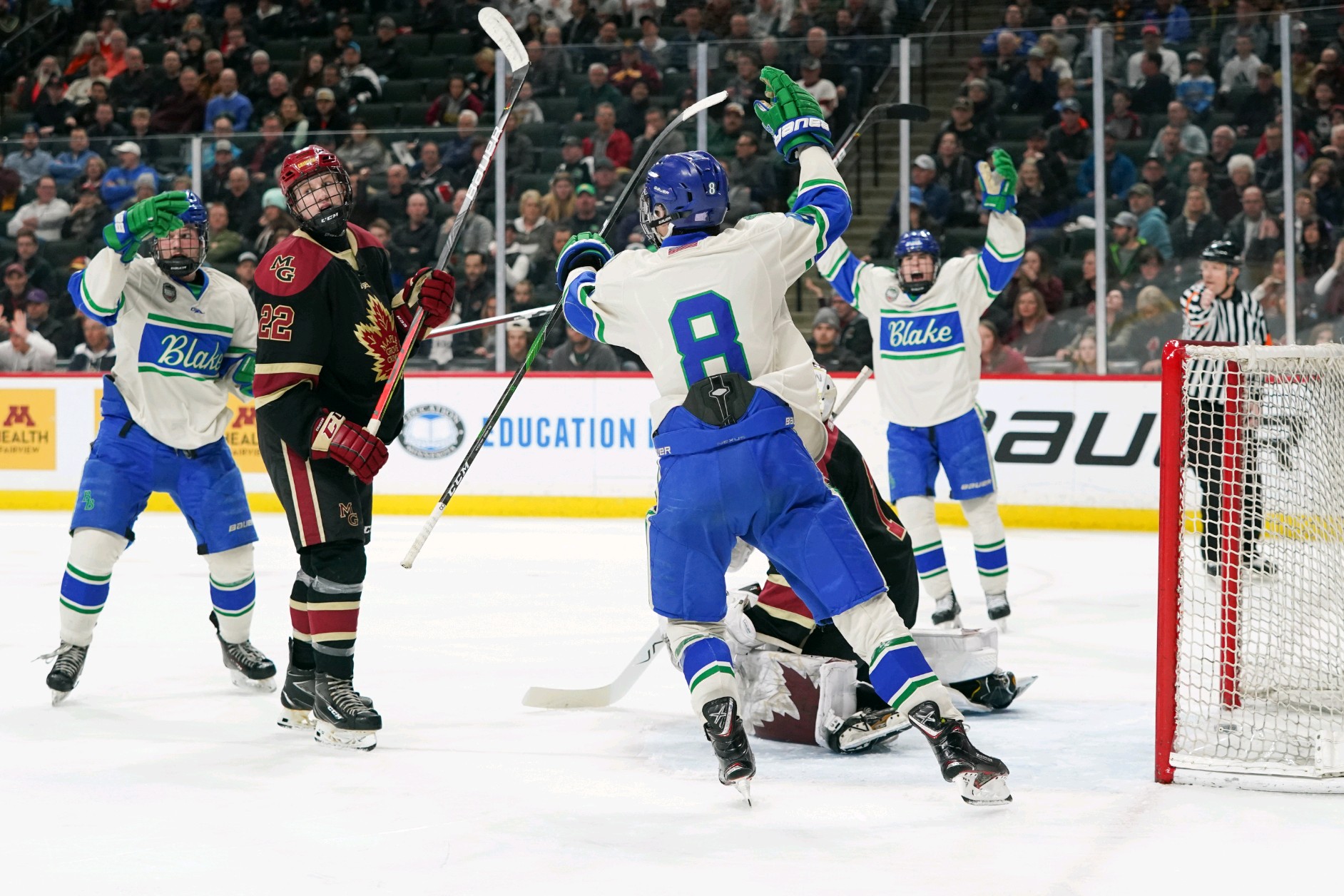 Blake's Gavin Best and his teammates celebrate Will Svenddal's game-winning goal in the third period of the Bears' 7-5 win over Maple Grove on Thursday afternoon at Xcel Energy Center. (MHM Photo / Rick Olson)

SAINT PAUL – The big stage of a Class 2A quarterfinal game in front of a packed crowd at Xcel Energy Center can be quite daunting for high school players who haven’t been there before. So, how did first-year Blake coach Rob McClanahan prepare his team, making its first appearance in the 2A tournament?

“I tell them they’re going to skate Herbies if they mess up,” McClanahan said, generating some laughter in the postgame press conference.

In all seriousness, McClanahan, a gold medalist from the 1980 Olympic team, said he talked about accepting and embracing the big stage with his team.

“It’s even bigger today than when I had the opportunity to play in it, eons ago,” said McClanahan, who saw an undefeated season get upended with a loss to Richfield in the 1976, single-class tournament quarterfinals.

The 2-seed Bears relished the opportunity and came away with a 7-5 victory over Maple Grove in a back-and-forth thriller to kick off the 2A part of the boys’ hockey tournament Thursday afternoon. All seven goals came from the Bears’ top line, with junior Joe Miller netting a hat trick and senior Jack Sabre scoring two goals and an assist.

Blake held a 3-2 lead through two periods, but the action was far from over, with seven more goals coming in the third period. After Sam Jacobs tied the game a few minutes in for Maple Grove, senior Gavin Best and Miller connected for a shorthanded goal to re-take the lead. 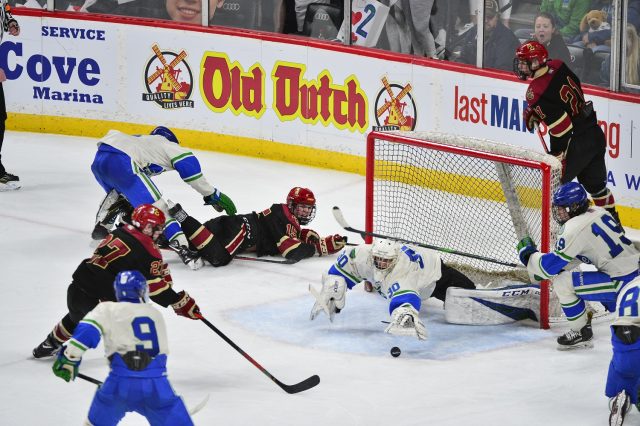 Miller and Best had a 2-on-0 opportunity through neutral ice and passed the puck back and forth a few times before Miller completed his hat trick.

McClanahan loved to see the passing between two of his top players on that opportunity.

“It’s not just fun to watch,” McClanahan said. “I think it’s fun for the guys that are doing it.

“You move the puck like that, you’re going to have a lot of chances.”

Sabre made it a two-goal lead a couple minutes later, but Maple Grove tied it again with a pair of goals 1 minute, 16 seconds apart thanks to Tyler Oakland and Joshua Giuliani’s second of the game.

The game-winner came off senior defenseman Will Svenddal’s stick on the power play with 2:14 to play in regulation. His shot from the point made it through traffic and into the net. The penalty was a slashing call on Ben Leafblad.

“We battled the whole game,” Guiliani said. “I thought we were the better team. They got some lucky calls that I thought were not very good. And then they capitalized on their opportunities.”

A couple minutes later, Henry Nelson knocked the Maple Grove net off its pegs with 1:46 to play. McClanahan declined a penalty shot and chose to take the power play on the delay-of-game penalty. Best scored an empty-netter to seal the victory.

“It was pretty crazy,” Miller said. “I think I can say I’ve never played in a game quite like that. A lot of ups and downs. But I think we managed it well.”

Maple Grove coach Todd Bergland said after the game that he was not too upset about the delay-of-game call, but rather, he took issue with the slashing call during the tie game, “when we’ve got all the momentum in the world.”

“That clearly wasn’t a penalty,” Bergland said. “Again, refs are human. They make mistakes. And it’s a tough profession. I commend them for everything. But that was the game-changer right there. That was it. You don’t call that penalty, and we’re probably on the other end of the stick.”

These two teams faced each other not long ago, on Feb. 15 during the regular-season finale. The Crimson tied the game with 2 minutes, 2 seconds left in regulation before Sawyer Skanson scored the overtime game-winner about three minutes into the extra session for a 5-4 Crimson victory.

Sabre called the Class 2A tournament the “holy grail.”

“This is the pinnacle of high school hockey, and this is where we wanted to be,” Sabre said. “We knew we could compete at this level.”

The state tournament is a place for star players to shine and add to their already impressive goal and points totals for the season. It’s a rarer to see a player score his first goal of the season on such a big stage.

But 3-seed Eden Prairie senior Kai Stansberry accomplished the feat, scoring what turned out to a game-winning goal in his team’s 4-0 shutout over Lakeville South in the second Class 2A quarterfinal Thursday. He put his team up 1-0 early on a mini breakaway, 3 minutes, 48 seconds into the game.

“My line, we do the heavy hitting,” Stansberry said. “We’re the grinders on the team. So, we like to get that jumpstart.”

It was a relief to get that first goal under his belt, coming on his line’s first shift of the game, too.

Stansberry shifted to the forward position about halfway through the season, according to his coach Lee Smith. They needed to make a change to get heavier and bigger to face the stronger teams as of late. 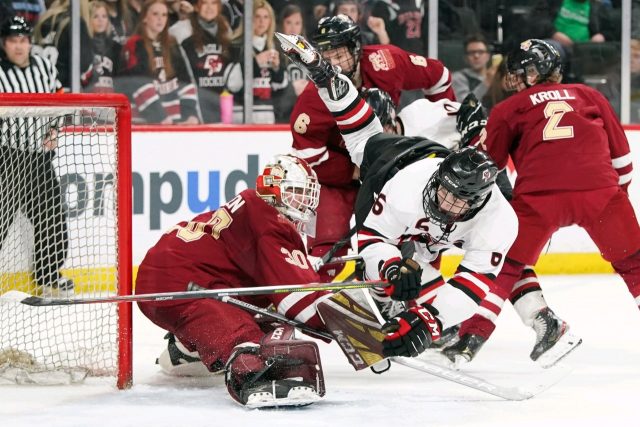 “And we’ve been talking about him being the difference-maker down the stretch,” Smith said. “And today he was.”

The Eagles (23-5-1) had a 2-0 lead through the first period after a goal from Luke Mittelstadt before getting a pair of goals from senior Ben Steeves in the second. First, Steeves finished off play where the puck bounced back out front from the end glass.

The fourth goal was reminiscent of one of the most famous goals former Minnesota Wild player Mikael Granlund scored, a diving play at the goalmouth. Steeves was a man on a mission with that goal, noting how Lakeville South was playing defensively, man-to-man.

“Every time I’d hear someone say, ‘I’ve got Steeves! I got (Jackson) Blake! I got Mittelstadt!’” Steeves said. “And they would just stay on us.

“So, we kind of figured out that if you beat your guy that’s on you, you can just take it to the net and nobody will come to you because they stay on the other guys. When I put it through the guy’s stick, I just drove the net and buried it.”

Steeves, a Mr. Hockey finalist, is up to 35 goals this season.

Eagles senior goaltender Axel Rosenlund made 29 saves for his third shutout of the season. The Cougars had some more offensive zone time in the second period and got some chances in the third but couldn’t cash in.

“We needed to get that one in just to get the bench going and get everybody going,” said Lakeville South coach Janne Kivilhalme.

The game was a complete rematch of last year’s quarterfinal, a game Eden Prairie also won, but it took three overtimes to get to the 3-2 decision. The Eagles outshot the Cougars 66-29 in that one, including 27-8 in overtime.

The Eagles and Bears will face each other in the semifinals. Blake defeated Eden Prairie 5-4 on Jan. 25.