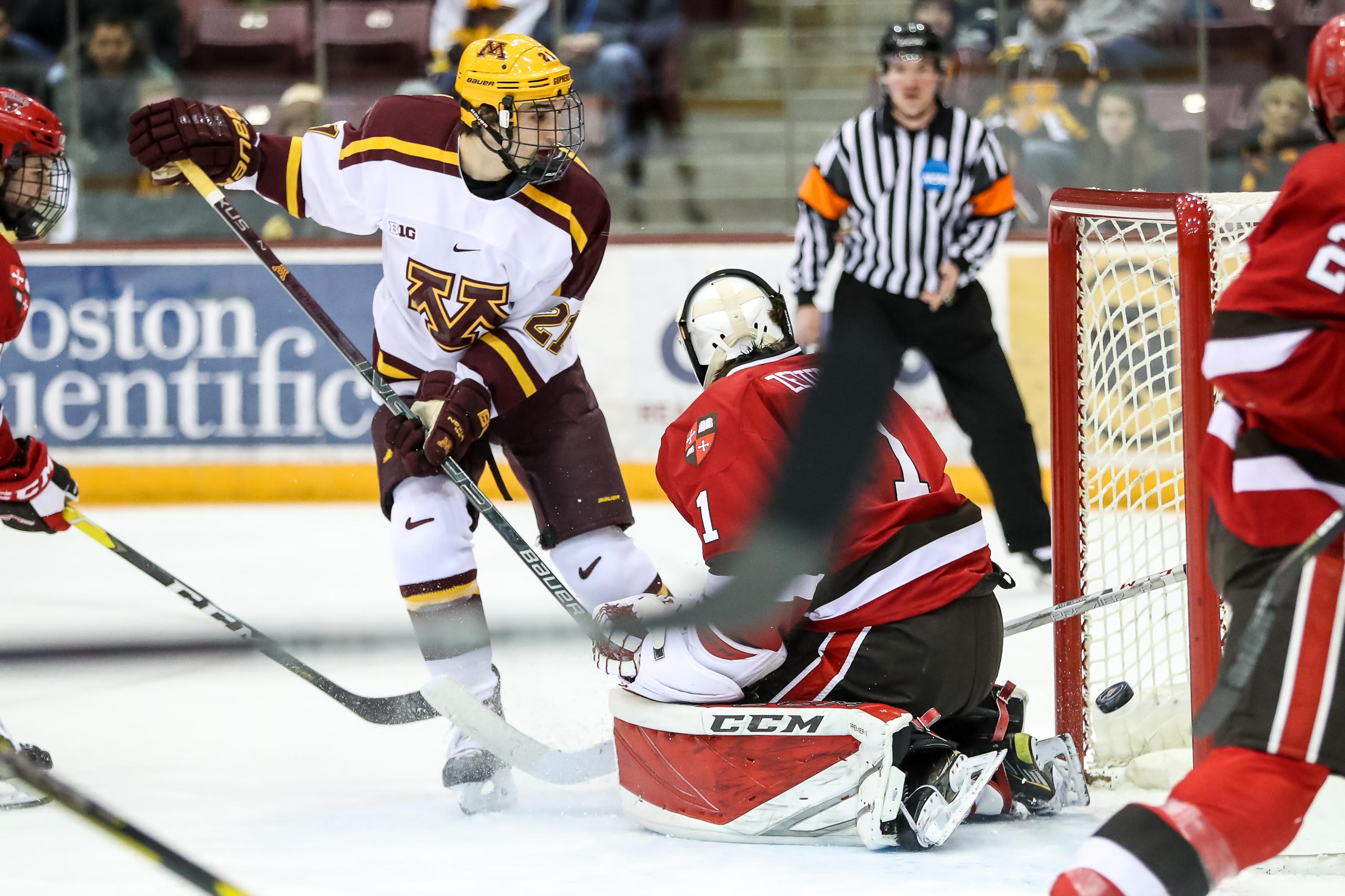 Gopher forward Nathan Burke watchs the first of his two goals get behind St. Lawrence goaltender Emil Zetterquist in Minnesota’s 3-0 win over the Saints on Saturday night at Mariucci Arena (Brace Hemmelgarn/University of Minnesota Athletics) 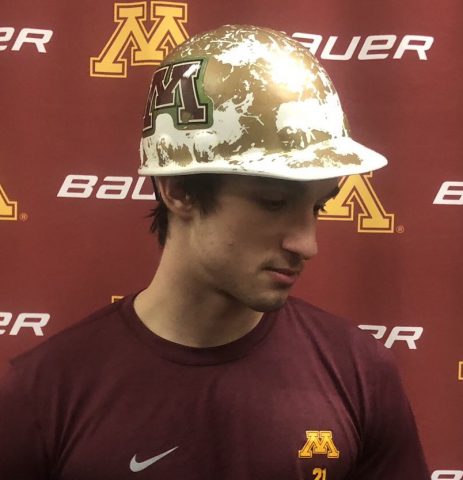 MINNEAPOLIS — Its gold paint may be chipping away revealing its all-white origins and its maroon “M” logos may have seen better days, but the hard hat, emblematic of the University of Minnesota men’s hockey team’s Player of the Game, fit Nathan Burke perfectly on Saturday night.

Burke, the first Arizona native to ever suit up for the Gophers, had just scored scored the first two Minnesota goals — the first points of his collegiate career — in a 3-0 win over St. Lawrence at Mariucci Arena. The freshman’s performance helped  Minnesota salvage a split with the Saints after a devastating 4-3 overtime loss in Friday night’s series’ opener.

“After last night it was definitely cool to bounce back and help my team out,” Burke said. “I have great linemates, (Sammy) Walker and (Blake) McLaughlin, and they did all the work. I just happened to go to the right places.”

The all-freshman line’s six-point night included Walker’s second of the season and a pair of assists by McLaughlin.

“It’s a good statement for him,” Motzko said of Burke who played just his third game of the season after sitting out Friday night. The Gopher coaching staff has been cautious with Burke’s recovery from a bout with mononucleosis which cost him much of the preseason and the beginning of the regular season.

“We can see Burkie’s skill in practice and he got a shot and did his thing,” said goaltender Eric Schierhorn who shut out the Saints with 12 saves. “His second one should probably be on SportsCenter.” 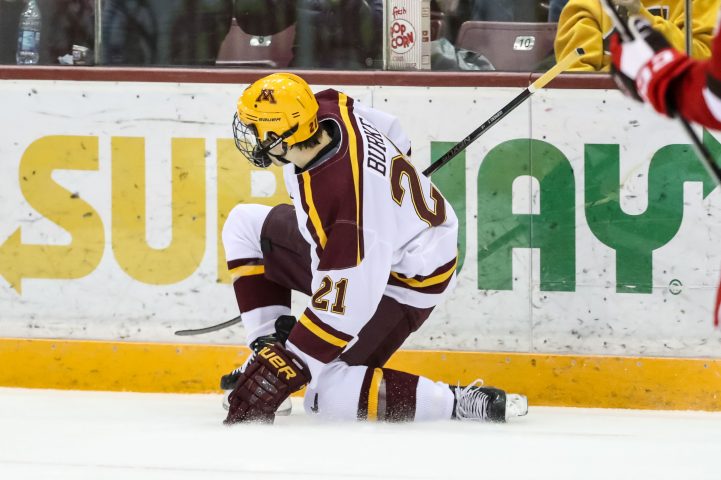 Schierhorn was referring to the play in which Burke received a pass from Walker toward the bottom of the right circle, spun away from a St. Lawrence defender, drove to the net and buried his second career goal behind Saints netminder Emul Zetterquist at the the 7:43 mark of the second period.

“I don’t know about that,” Burke said when told of Schierhorn’s SportsCenter suggestion. “But I mean, if it happens, it happens, that’d be cool for sure.”

The well-traveled Burke grew up in Scottsdale, Ariz.where he sandwiched two stints with the Phoenix Jr. Coyotes around stops with the Los Angeles Jr. Kings and the Cleveland Barons before moving on to the North American Hockey League’s Aberdeen Wings for the 2017-18 season.

“It’s definitely cool to represent my state a little bit,” Burke said. “I know (Toronto Maple Leafs star) Auston Matthews is doing a great job at the pro level so I’ll do what I can at the collegiate level.”

When a reporter playfully asked if he was crowning himself the Auston Matthews of college hockey, Burke was quick to refute that assertion.

“No, definitely not,” Burke said with a laugh. “Don’t put those words in my mouth.”

In Aberdeen, Burke led his team and the NAHL in goal scoring with 32 goals in 60 games last season and his 56 points ranked first on the Wings and seventh in the league. The All-NAHL Second Team and All-NAHL Rookie First Team honoree’s 16 power-play goals in the regular season also led the league.

“He’s a hard worker, loves to play around the net,” Motzko said. “That’s where he’s best, right around the goaltender.”

Burke, who originally committed to St. Cloud State back in February, decommitted from the Huskies when coach Bob Motzko departed for Minnesota at the end of last season and brought assistant coach Garret Raboin with him.

“Rabs recruited me really hard and I just felt comfortable,” Burke said. “My mom always said when you know you’d know and I just felt right with them. Frankly, if they went anywhere else, I think I’d follow them there too.”