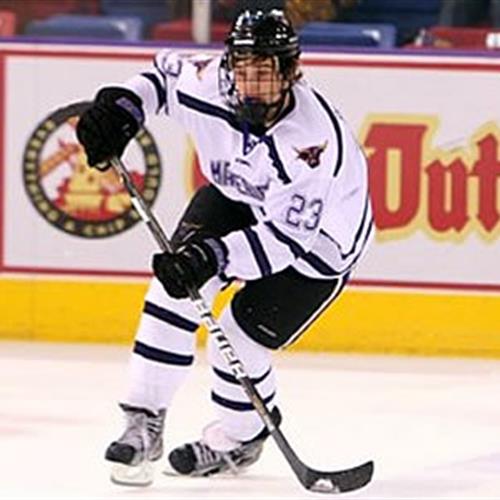 Just 18 years old, Minnesota State freshman forward Teddy Blueger is developing into one of the WCHA’s most exciting young players.

Not much was said on that first road trip back in October.

“We got in that room and he was a mute. Didn’t say a word,” Hayes said. “I don’t know if he was scared of me or what, but he was a mute — kept to himself, did things his way, went to sleep, didn’t talk or anything like that.”

Now almost all the way through his first season with the Mavericks, Blueger is quiet no more — on the ice or off.

Last weekend in Duluth, Blueger scored two goals and added two assists in being named the WCHA’s Rookie of the Week. He scored a goal each night against Minnesota Duluth — timing his offense perfectly in netting the game-winner each night, the first two winners of his collegiate career.

The weekend was just another for the red-hot Blueger, who, after struggling to adjust at the start of the season, has turned on the offense. His play has made the young Mavericks incredibly deep down the middle as the team prepares to make a stretch run towards its first NCAA Tournament berth since 2002-03.

For Blueger, the season really has been a tale of two halves. Following a Nov. 30 game against Bemidji State, Blueger had played in 13 games scoring five points with no multi-point efforts.

He has played in 13 games since, scoring 12 points and chipping in with three multi-point contests. Confidence has been the key for Blueger, who represented Team Latvia in the World Junior Championships in Ufa, Russia over the holidays.

In the process, Blueger became the first Maverick to ever play in that tournament.

“Adjusting to the speed. The game has slowed down for me since the beginning of the year,” Blueger said. “The coaches have really helped me too, giving me tips on how to slow it down. My teammates, they’ve made things easier for me on the ice.”

MSU’s first weekend off in several weeks — and Blueger’s in several months — also helped the young Latvian get his legs back. It was a whirlwind summer in which he was a stand out at the World Under-18 tournament in the Czech Republic, became a second round pick of the Pittsburgh Penguins and shined at the Pens Prospect Camp.

All that jammed into a 17-year old’s schedule between the normal stresses of finishing up his senior year at Shattuck-St. Mary’s and his starting his freshman year of college in Mankato.

Captains practice commenced in September before workouts, exhibitions and the season kicked off in October. From early October until mid-December, the Mavericks played every weekend but one — all the while, Blueger was prepping for play in the WJC.

Following MSU’s split at Nebraska-Omaha Dec. 14-15, Blueger was on his way to Russia for Latvian pre-tournament camp and the championships themselves.

After returning to the states, Blueger was back in the lineup Jan. 11-12 against Wisconsin. The team had played three straight weekends, including a trip to Anchorage and a home and home against No. 1 Minnesota over that stretch.

“After I got back from world juniors, I was feeling tired and my energy wasn’t where I wanted it to be,” Blueger said. “I thought the first weekend back against Wisconsin, I didn’t play very well, but I’ve been getting better after that.”

A weekend split with the Gophers yielded a weekend off before the trip to the north shore last weekend, and Blueger took advantage, resting a tired body that had been going for almost six months straight. But when the Mavs returned from the off weekend, Blueger was ready to go. Mavericks coach Mike Hastings raved about Blueger’s week of practice leading into the UMD series and the results showed.

“I don’t think he’s easily satisfied,” Hastings said. “He has expectations for himself and for this team that are pretty lofty.”

Blueger began the year on the third and fourth lines, based simply on the fact he was a freshman. Hastings said he never thought of him as a bottom-six guy though, and slowly, Blueger has been working his way up the depth chart.

In Duluth, he centered a line with Hayes and fellow freshman Dylan Margonari on the wings — a group that scored seven goals and 12 points on the weekend. Hayes was named the league’s Offensive Player of the Week.

But Blueger, the youngest player on Minnesota State’s roster, has also gained the trust of teammates and coaches in critical spots. Leading 3-2 in the third period, Hastings went to the end of his bench and back-up goaltender Phil Cook in search of faceoff stats. ‘I don’t think Bluegs has lost one all night,’ Cook responded.

So Hastings threw Blueger on the ice. He won the critical defensive zone faceoff and the game continued before a Hayes goal with 3:37 remaining salted the game away.

“He’s put himself in a spot now where, he’s one of our best face off men,” Hastings said. “As the responsibility has been thrown on him, he’s done a great job of handling it.

“I think he likes being put in spots where he has a lot of responsibility. I think he showed that [Friday].”

When Blueger made his commitment to Minnesota State back in April of 2011, the head coach of the team was Troy Jutting. After his dismissal following the 2011-12 season and the subsequent hiring of Hastings from Nebraska-Omaha, one the new coach’s first pieces of business was to make sure Blueger was still in for the fall.

Within his first couple of days on the job, Hastings was off to the Czech Republic, where he met Blueger the first time at the Under-18s.

The move impressed Blueger and his family.

“I liked him because he was really honest,” Blueger said. “He seemed like a good coach and everyone I had talked to had nothing but great things to say about him. I thought he’d be a good coach for me to play for.”

Hastings’ first impression was positive too. As the associate head coach at UNO for three years, Blueger was certainly on Hastings’ radar. But he had never met him because of Blueger’s commitment to MSU.

“I’m a big believer in the apple doesn’t fall far from the tree,” Hastings said. “If you’ve ever met his family… they’re salt-of-the-earth people.

“The great thing about them is, they’ve never asked for anything other than an opportunity. There’s been no demands, only ‘Teddy wants an opportunity.’ And I think Teddy’s taken that opportunity and ran with it.”

Hastings credited assistant coach Darren Blue, a hold-over from the Jutting era, for establishing a relationship with Blueger and his family. That relationship gave Hastings an opening once he accepted the MSU job in April.

“That was the most important piece of it in my mind,” Hastings said.

COMING OUT OF HIS SHELL

That weekend in St. Cloud was a seminal weekend for Blueger and the Mavericks. MSU was swept by the Huskies, beaten 5-1 both nights at the National Hockey Center.

Since then, the team has bought into Hastings’ style and the team has gone 16-7-1, climbing all the way to the No. 9 spot in this week’s USCHO.com National Poll. Entering this weekend’s series with Michigan Tech, MSU is also No. 10 in both the USA Hockey Magazine poll and the Pairwise Rankings.

For Blueger, the shy freshman has also come out of his shell. No longer talking softly, Blueger is most definitely carrying a big stick.

“I had a chance to room with him again [in Duluth],” Hayes said. “My what a difference. Just a maturity level, talking, joking around, just a difference in that, I think he’s really coming into his own.”