Minnesota shut out in the shootout as St. Louis rallies to win 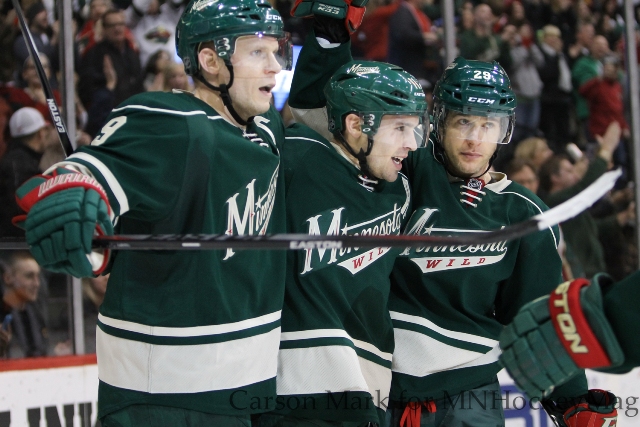 Minnesota’s Mikko Koivu (left), Zach Parise (center) each scored in regulation but neither they nor Jason Pominville (right) could beat St. Louis goaltender Jake Allen in the shootout in the Blues’ 3-2 win over the Wild on Nov. 29 at St. Paul’s Xcel Energy Center. (MHM Photo / Carson Mark)

Minnesota shut out in the shootout as St. Louis rallies from third-period deficit

The Minnesota Wild and St. Louis Blues each worked overtime for the second consecutive night but 24 hours after the Wild rallied for an overtime win in Dallas, they saw the Blues come back to tie the game in the third and leave St. Paul with a 3-2 shootout win. As he had done the night before against Edmonton in overtime, St. Louis’ Vladamir Tarasenko notched the game winner when his was the only shot to beat either goaltender in the shootout.

The Wild’s Mikko Koivu potted his third goal of the season while Zach Parise scored his ninth of the year and No. 250 of his career to add to his team-leading point total (9-9–18) this season. Niklas Backstrom got the start in goal for Minnesota, making 24 saves through overtime and stopped shootout wiz T.J. Oshie of Warroad and Alex Steen before surrendering Tarasenko’s winner.

Tarasenko’s clincher wasn’t his only contribution to the contest, however.

The game remained scoreless as it reached its halfway point before Tarasenko snapped the tie at the 10:20 mark of the second period. But Koivu and Parise responded with goals 4:35 apart late in the period to give the Wild a 2-1 lead at the second intermission. Minnesota appeared poised to maintain that gap as the 15-minute mark of the final period approached but former Spring Lake Park and Minnesota State star, David Backes, scored his seventh of the year with just 5:33 to go to ultimately send the game to overtime.

But the Wild could not muster a shot in the extra five minutes on Blues goaltender Jake Allen who finished with 36 saves and and denied Parise, Koivu and Jason Pominville in the shootout.

Next up for Minnesota is the Montreal Canadiens, 4-1 winners over the Wild on Nov. 8 in Montreal. The Habs visit Xcel Energy Center on Wednesday, Dec. 3 for a rematch scheduled to start a 6 p.m. CT.