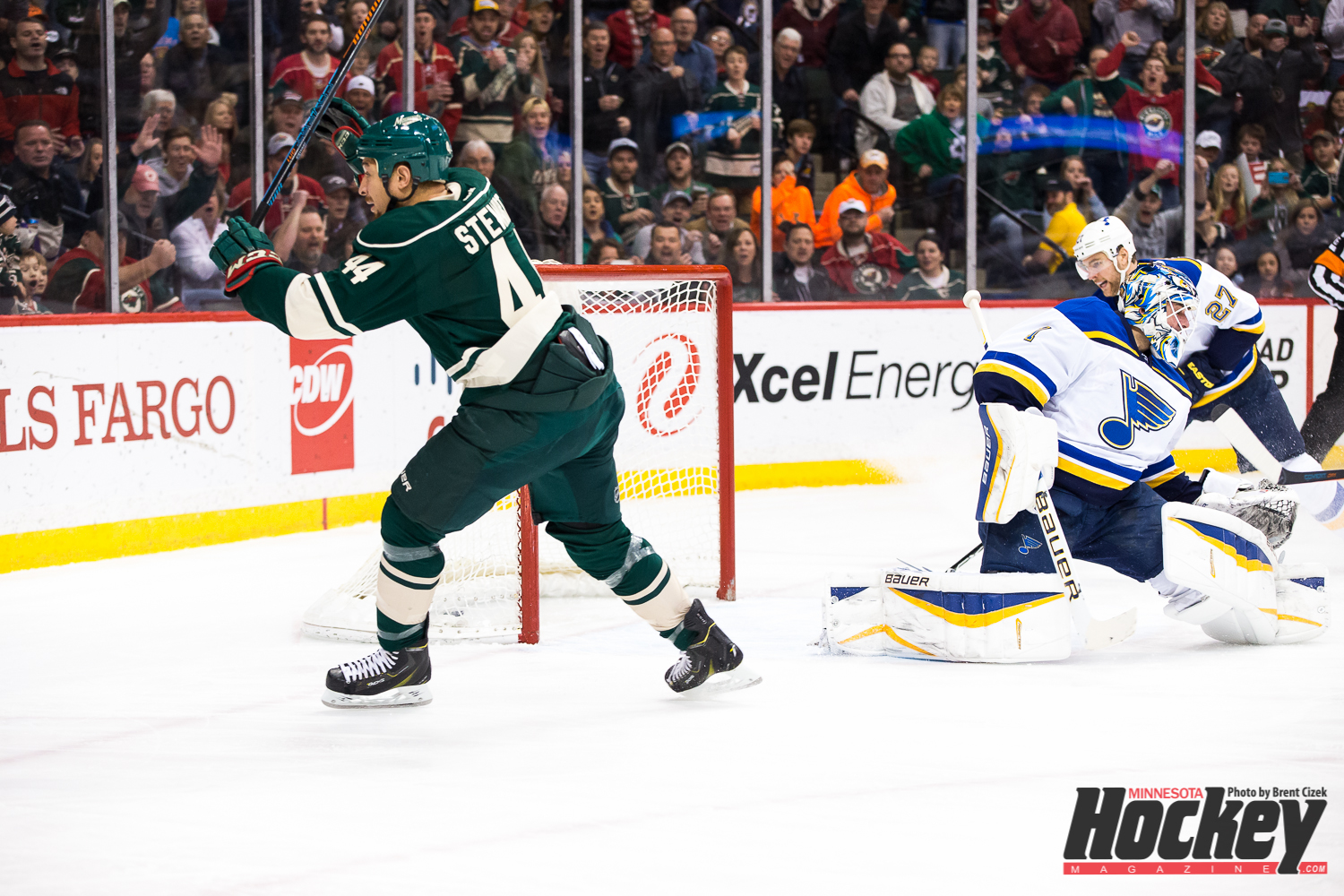 St. Paul — Devan Dubnyk was not the only mid-season find for Wild general manager Chuck Fletcher.

Fletcher followed up his much-acclaimed acquisition of Dubnyk by adding Sean Bergenheim, Jordan Leopold and Chris Stewart at the trade deadline, and Stewart has quickly emerged as an invaluable forward for a Wild team that has not lost two successive games in two months.

Stewart swiped the puck, turned on the jets and outskated two defenders to score on a breakaway to give Minnesota a 1-0 lead Saturday in a matinee game that ended with a 6-3 verdict over the St. Louis Blues in front of 19,204 at Xcel Energy Center.

Just FYI: The last time the Wild lost two in a row was Jan. 19-20, shortly before the deals for Stewart, Bergenheim and Leopold.

When Stewart arrived from Buffalo two weeks later, he brought a reputation as a strong power forward willing to mix it up in front of the opposition goaltender or drop the gloves if necessary.

“We saw it the first game,” Parise said. “He had a little jump in his first game, and I remember one play in particular, he caught everyone by surprise. We know it’s there and he uses it well.

“Tonight, the separation that he created on that breakaway was pretty impressive.”

Stewart, playing in his 10th game in a Minnesota uniform, had a goal and four shots on net in addition to twice outskating the opposition to negate potential icing calls Saturday afternoon.

“Playing with speed this time of year is an important part of the game,” he said. “Even though I am a big body-power forward, I really pride myself in my ability to move my feet. I know when I’m doing that I’m at my best.”

The Wild, who dropped a home decision to the Washington Caps Thursday night, rebounded Saturday to run their record to 20-5-1 since a shootout loss to the Detroit Red Wings on Jan. 20.

Stewart has three goals and three assists as the Wild demonstrated the ability for the fifth time to avoid consecutive losses.

“It shows our resiliency,” he said.

Whether or not the possibility of a postseason matchup against the Blues materializes, Stewart admitted that he plays with a little extra incentive against the team he toiled for before they dealt him to Buffalo last season.

“That’s a good hockey team over there,” he said. “At this time of year we see where we stand, and that’s a tough matchup. The last couple games we played them well, so that’s a good sign.”

Minnesota got goals from six players against the Blues to record their second win over St. Louis in a week. Justin Fontaine had a goal and two assists, Jonas Brodin a goal and an assist and Ryan Suter and Charlie Coyle each collected two assists.

But coach Mike Yeo noted that Stewart got things going with his breakaway goal at 7:47 of the first period of a game when players had to be adjusting to a rare 1 o’clock start.

“That was a real key moment in the game,” Yeo said. “To make one play, to get a stick on that puck and then obviously win a footrace down the ice and capitalized, that was big.”

It was no surprise to Yeo, however, who indicated that he figured as soon as the trade was completed that the 230-pound Stewart would mesh on a line with Mikko Koivu and Nino Niederreiter because of the trio’s size.

“He’s got a real good understanding of what his identity is, and obviously he’s a leader in that regard,” Yeo said of Stewart. “I’m real pleased with his game at both ends of the ice.

“He’s been awesome,” Parise said, noting that the size of that line adds a dimension that opponents must be aware of. “Not only the scoring, but just his physical presence, it goes a long way. We play against some big teams with big D-men, and you need guys like that. Like I said, his presence alone makes a big difference in the room and on the ice.”

His speed doesn’t hurt, either.