Gophers among the top-10 finalists for the 2014 Patty Kazmaier Memorial Award as announced today by USA Hockey. 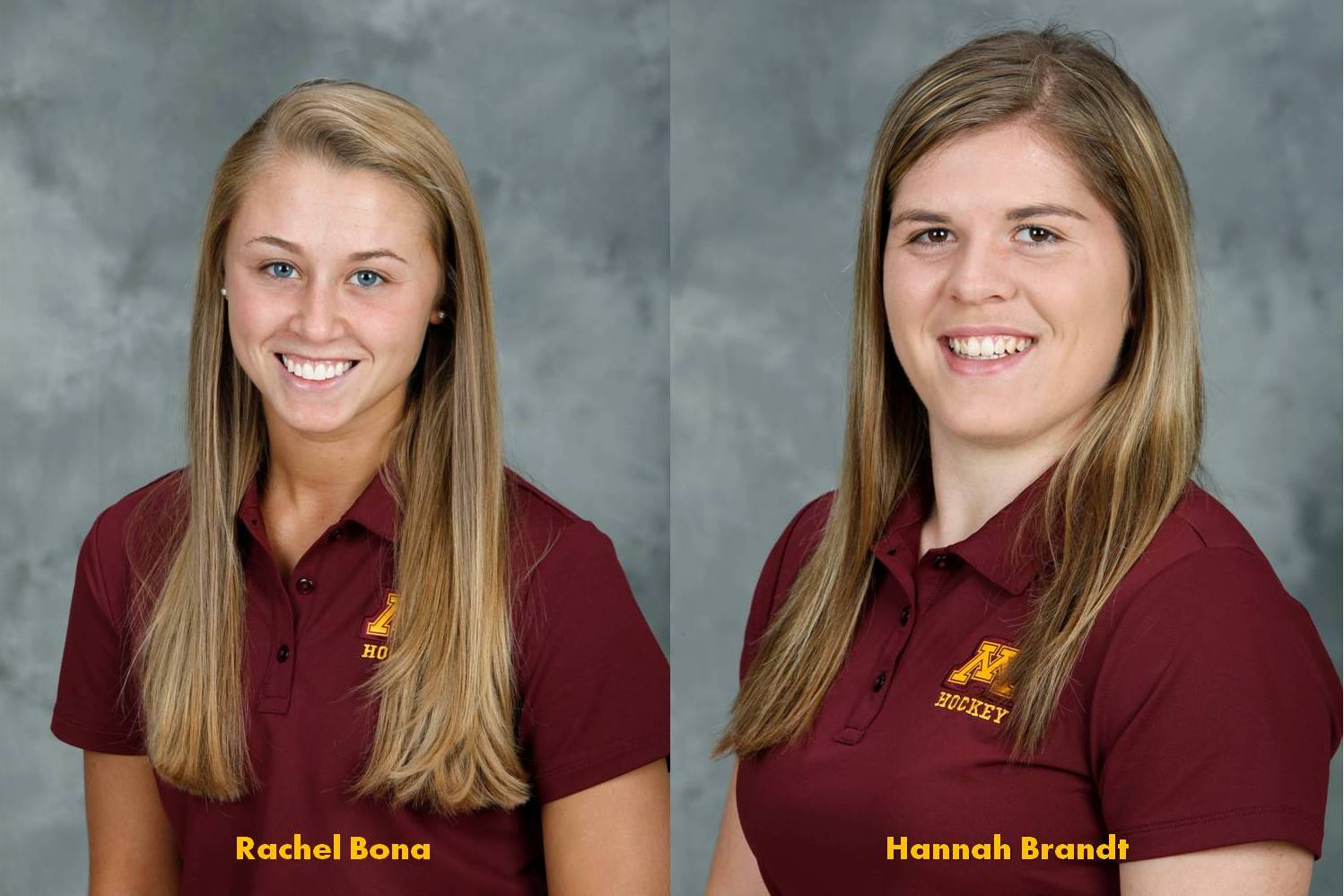 The Patty Kazmaier Memorial Award is bestowed annually upon the top player in NCAA Division I women’s ice hockey and this year will be unveiled at a brunch ceremony at Oakdale Theater in Wallingford, Conn., on Sat., March 22, as part of the 2014 NCAA Women’s Frozen Four weekend hosted by Quinnipiac.

Brandt is the lone repeat honoree as she was also a top-10 finalist in 2013. Eight schools are represented in the top-10, led by Minnesota and Clarkson with two finalists each.

The three finalists, including the recipient of the 2014 Patty Kazmaier Memorial Award, will be chosen by a 13-person selection committee made up of NCAA Division I women’s ice hockey coaches, representatives of print and broadcast media, an at-large member and a representative of USA Hockey, the national governing body for the sport of ice hockey in the United States. The top-3 finalists will be announced on Thurs., March 6.

The selection process commenced earlier this month when NCAA Division I women’s ice hockey coaches were asked to nominate players for the award. Players who were nominated by two or more coaches were then placed on an official ballot, which was sent back to the coaches to vote for the top-10 finalists. The independent accounting firm PricewaterhouseCoopers, LLP, tabulated the ballots.

Tickets to the 2014 Patty Kazmaier Memorial Award Ceremony and Brunch can be purchased at PattyKaz.com. Individual seats to the event are $65, while tables of 10 are available for $600. A select number of sponsorships and program advertisements are also available.

Rachael Bona, a junior forward, currently ranks third in the nation in points (52) and assists (32). A two-time WCHA Offensive Player of the Week this season, Bona is second in the WCHA in conference points (38), is tied for second in goals (15) and is tied for third in assists with 23. The Coon Rapids, Minn., native is a child psychology major. She was named a 2014 WCHA Scholar-Athlete for her accomplishments in the classroom. This season, Bona has volunteered for the University of Minnesota’s Unlimited Dance Marathon to benefit the University of Minnesota Amplatz Children’s Hospital and at the Skate with Greats public outdoor skate at TCF Bank Stadium. She has also aided in the Gopher athletic department’s annual toy drive and food drive during her career.

“Rachael has taken her game to a whole other level this season,” head coach Brad Frost said. “She has become a complete hockey player who has a knack for the net. Rachael shoots the puck at a rapid rate and can fit the puck into tight spaces before defensemen or goaltenders have the chance to react.

“She has excellent hands, which creates space for herself and her teammates, and has increasingly become a play-maker on the power play as well as at five-on-five. The consistency at which she is producing as an offensive threat is impressive, and the fact that she plays in all situations – power play, penalty kill, etc. – shows the overall improvement and contributions she is making to our team.”

Hannah Brandt entered her sophomore season as the WCHA Preseason Player of the Year. A right-handed center from Vadnais Heights, Minn., Brandt leads the nation with 36 assists and is tied for the NCAA lead with 55 points. She intends to study Health and Wellness in the Inter-College Program. Brandt was recognized as a WCHA Scholar-Athlete this season. She has volunteered with the University of Minnesota Amplatz Children’s Hospital, Special Olympics Minnesota, Roseville Youth Hockey Association, Minneapolis Youth Hockey Association, University of Minnesota Medical Center – Fairview Hospital, Hope Kids and the Maplewood Care Center.

“Hannah is the type of player that immediately makes others more productive,” Frost said. “When she is on the ice, every one of her teammates automatically becomes more dangerous because of her vision, play-making, and hockey sense. Hannah is also incredibly gifted as a goal scorer, with a shot release second to none and puck handling skills that create chaos for defensemen and goaltenders. She understands the game at the highest level and is the offensive leader of our team.

“On the defensive side of the puck, she leads our team on the penalty kill, wins faceoffs, and is often times matched against the top lines of our opponents in key defensive zone situations. Most of all, Hannah is unselfish, deflects praise and cares deeply about the success of the program and her teammates. Hannah has proven to everyone over the past two seasons that she is indeed a special student-athlete both on and off the ice.”

ABOUT THE PATTY KAZMAIER MEMORIAL AWARD

An award of The USA Hockey Foundation, the Patty Kazmaier Memorial Award is annually presented to the top player in NCAA Division I women’s ice hockey. Selection criteria includes outstanding individual and team skills, sportsmanship, performance in the clutch, personal character, competitiveness and a love of hockey. Consideration is also given to academic achievement and civic involvement.

The Patty Kazmaier Memorial Award is named in honor of the late Patty Kazmaier, who was a four-year varsity letter-winner and All-Ivy League defenseman at Princeton University from 1981-86. An accomplished athlete who helped lead the Tigers to the Ivy League Championship in three consecutive seasons (1981-84), Patty Kazmaier-Sandt died on Feb. 15, 1990, at the age of 28 following a long struggle with a rare blood disease.