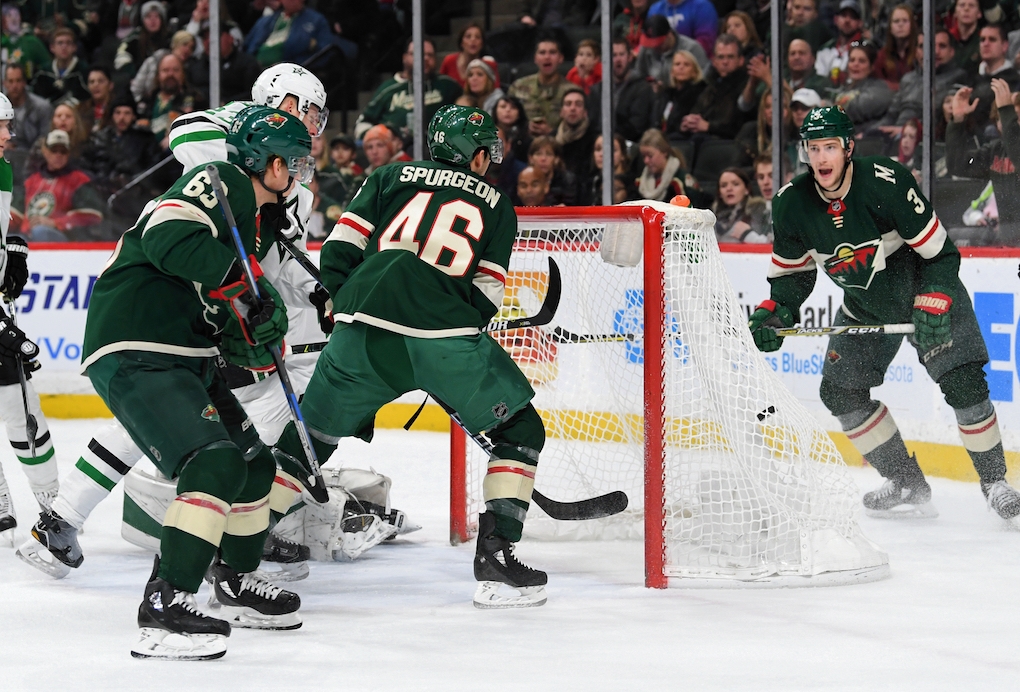 Tyler Ennis, Jared Spurgeon and Charlie Coyle watch Spurgeon’s first-period goal hit the back of the net in the Wild’s 4-2 win over the Dallas Stars on Wednesday night at Xcel Energy Center. (Photo by Russ Hons)

St. Paul – After a three-day Christmas break, the Wild returned to action for coach Bruce Boudreau’s 800th game and produced exactly what they figured they needed.

“We called it the start of the second half,” Boudreau commented.

It was just the 37th game of an 82-game schedule, but the Wild came into Wednesday’s post-Christmas festivities outside a playoff berth by one point.

“We’re going to have to win a lot of games for the playoff push,” defenseman Jared Spurgeon said, “and that’s what we’re trying to start off with right now.”

Minnesota got goals from Spurgeon, Eric Staal and Mikael Granlund to seize a 3-2 lead and skated to a 4-2 victory over the Dallas Stars in front of 19,107 at the Xcel Energy Center. 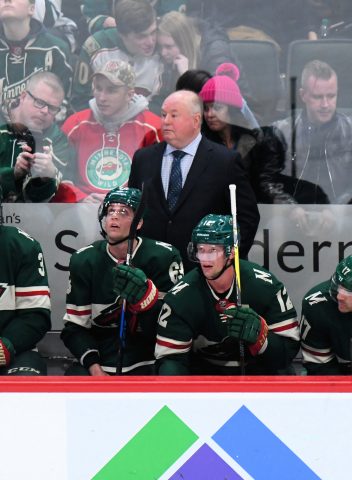 Bruce Boudreau picked up win No. 477 of his now 800-game NHL coaching career on Wednesday night. (Photo by Russ Hons)

The result boosted the Wild to 41 points, two behind the Stars, who have played one more game.

It also upped Boudreau’s coaching record to 477-232-91 over 11 seasons, although he downplayed any significance of coaching 800 games.

More interesting to Boudreau was the play of the Staal-Tyler Ennis-Charlie Coyle line that combined for four points, plus the contributions of Joel Eriksson Ek, who went pointless but showed again that he’s on track to becoming an offensive factor in the NHL.

“He’s going to start scoring,” Boudreau said. “It might not be this year, and I don’t mean that facetiously, but you can see, he’s going to be a real good player. He had more and more chances tonight, and eventually they’re going to go in for him.”

A number of forwards including Ennis, Eriksson Ek, Marcus Foligno, Zach Mitchell and Daniel Winnik, among others, are focusing on playing their best because injured Zach Parise is scheduled to start a rehab stint with the Iowa Wild and Nino Niederreiter is also closing in on a return to the lineup.

Boudreau likes the energy he sees from guys like he saw Wednesday from Ennis.

“We need people going,” he said. “We don’t have a lot of scoring. Anybody that can pick it up a little bit is good for us, and he did for us tonight.”

Ennis said he is simply “trying to keep playing the way I’ve been playing the last little bit. We’ve got a lot of depth on this team, and tonight was just a good game.”

With injured Devan Dubnyk also likely back in the lineup along with Niederreiter and Parise, the Wild are closing in on having their lineup fully healthy for the first time this season.

After losing three of four on a pre-Christmas road trip, they regrouped Wednesday and dumped Dallas, outshooting the Stars 31-26 and producing what Boudreau labeled as their strongest third period in a while.