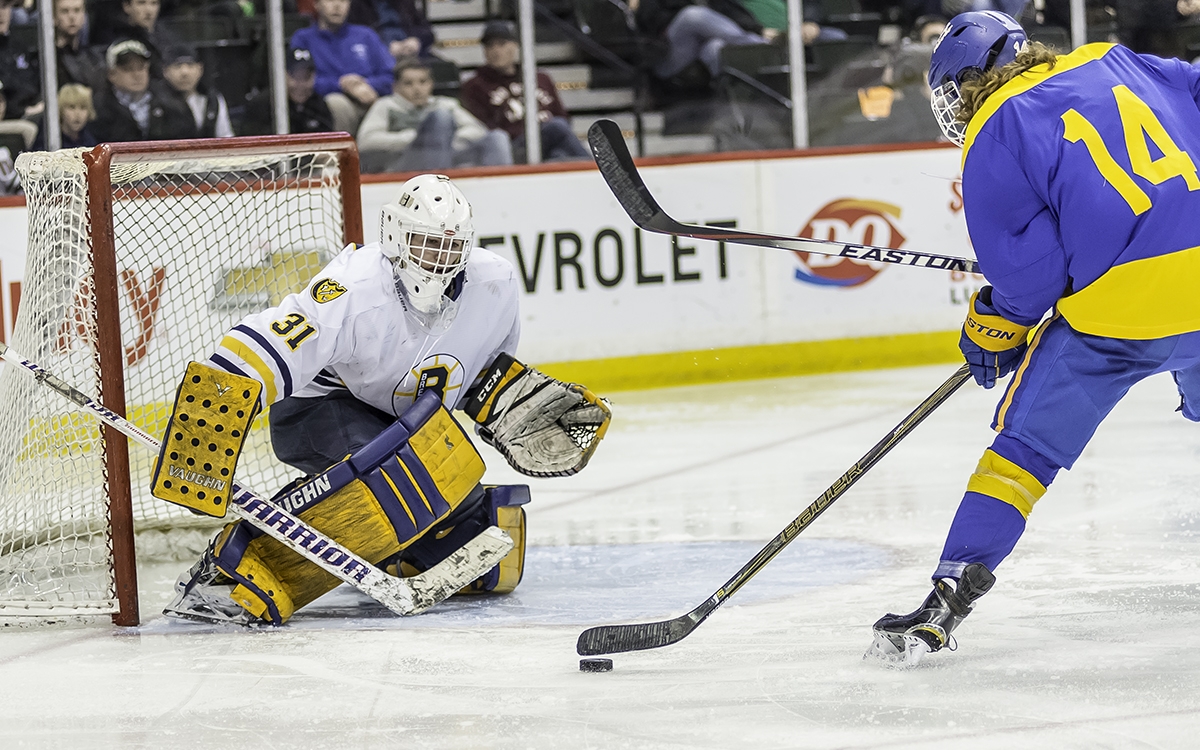 Breck goaltender Linden Olness sets himself to make a save on Thief River Falls’ Ethan Johnson. It was one of 18 saves on the day for Olness as the Mustangs blanked the Prowlers 4-0 in their Class 1A  Boys’ State Hockey Tournament semifinal on Friday afternoon at Xcel Energy Center. (Photo by Tim Kolehmainen / Breakdown Sports U.S.A.)

That drink is the Mustangs’ top line made up of Scott, Mr. Hockey finalist Chase Ellingson and William Blake, which has scored nine goals in two state tournament games.

Scott is the piece that gets the line going.

“He is the catalyst on the line,” Larson said. “He has to realize when to keep the puck and when to move the puck to Chase and Will. He has done a fabulous job at that.”

Scott scored two out of his line’s three goals to lead No. 2 seed Breck to a 4-0 victory over No. 3 seed Thief River Falls in the Class A boys’ state hockey semifinals at Xcel Energy Center on Friday.

Ellingson and Blake both scored hat tricks in the quarterfinal games against Mankato West, but Scott took the spotlight almost immediately in the second round for Breck (26-3-1).

Scott scored a goal just over three minutes into the game. Ellingson, who had the assist on the goal, extended the Mustangs’ lead to 2-0 shortly after.

“It really set the tone,” Scott said. “We played them earlier in the year, and are a fighting team. They won’t back down even down three or four goals. That start was huge.”

Although he gave up two goals on the first five shots, Thief River Falls goaltender Kade Nelson settled down, and looked more comfortable as the period proceeded.

Nelson almost escaped the second period without giving up a goal, but Scott had other ideas. Scott scored his second goal of the game and tournament with less than a minute left in the second period, giving the Mustangs a comfortable 3-0 lead heading into the second intermission.

As Breck found success in Thief River Falls’ zone, the Prowlers (23-7) struggled to attack the Breck net, mustering 18 shots through three periods. Their best chance came during a power play about half way through the period, but Thief River Falls did not even register a shot.

“They take that time and space away,” Prowlers’ coach Tim Bergland said. “You don’t have your extra half a second to make that play.”

The Mustangs also successfully slowed down Thief River Falls forward Ethan Johnson, who scored three goals in the quarterfinals. Johnson, who broke the Prowlers’ 65-year record for most goals in a season, had opportunities, but never converted.

“Our defenseman did a nice job,” Larson said. “You have to play the man on him, and you have to move your feet; when he gets the puck, hold on.”

Breck goaltender Linden Olness has yet to give up a goal in the state tournament. Olness’ play combined with the shot-blocking by the defenseman has Larson excited.

“I am a defenseman, so I love that,” Larson said. “We always tell the guys we start from our end.”

The Mustangs’ defensive efforts, combined with a potent offense, have them back in the state finals for the first time since 2010 and fifth time overall. Larson won state championships in 2009 and 2010, which were his first two years as head coach of Breck.

The biggest difference as the Mustangs head into Larson’s third state title game: how the culture has changed.

“We have created a culture of the right way to do things,” Larson said. “We believe in it, and we are going to stick to it.”