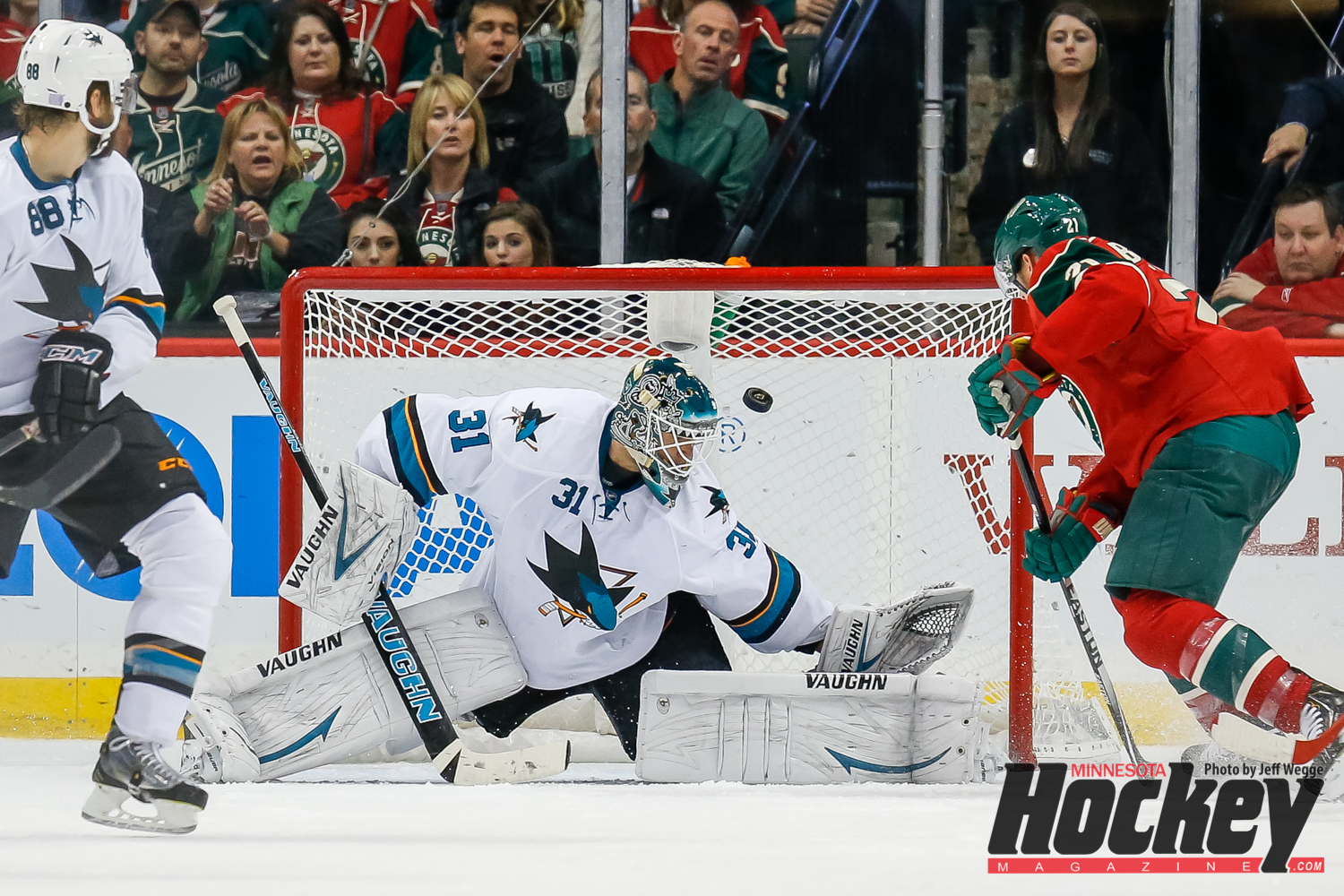 Kyle Brodziak scores the second of his two third-period goals to tie Thursday night’s game between the Minnesota Wild and San Jose Sharks 3-3 at Xcel Energy Center. The Wild went on to win the game in a shootout. (MHM Photo / Jeff Wegge)

Kyle Brodziak had the kind of start to this season that must have had him wondering about his hockey future.

Dispatched to the press box as an observer for five consecutive games, Brodziak got into just his fourth game of the season Thursday night and responded with two goals as the Wild rallied to force overtime and then defeated the San Jose Sharks 4-3 in a shootout.

He had difficulty removing the postgame smile from his mug after he converted two pinpoint Thomas Vanek passes to erase a 3-1 Sharks lead over the final 15 minutes of the third period.

A lunch-bucket center who had 22 goals and 22 assists during the 2011-12 season, Brodziak became a punchline for fans who could not grasp during the past two seasons why so many of his great chances hit a goalpost or a goaltender’s pads.

Before the season, Brodziak admitted that it was getting to him, as well.

At age 30 and in the final season of a three-year contract, he has gone from an occasional top-six Minnesota forward to a guy who scored just eight goals in 81 games last season and this season became healthy scratch for the first time in his career.

Always approachable and friendly, Brodziak shook his head about it Thursday after he was selected as the No. 1 star of a game won on shootout goals by Mikko Koivu and Jason Pominville.

“I’m definitely not the first guy that’s ever gone through it,” he said. “You’ve just got to stay positive and keep working hard so when you get the opportunity you can make the best of it.”

Brodziak’s play in front of 18,633 Xcel Energy Center customers delivered a statement about what the Wild appear to be made out of this season.

Erik Haula, Matt Cooke and Jonas Brodin missed the game because of injuries, and defenseman Jared Spurgeon crashed into the boards and left after playing just three shifts in the third period.

“That’s huge, to see that character in our team and what we can do in the third period there,” Wild forward Charlie Coyle said.

“We don’t want to be known as a team that folds in the third period,” forward Jason Zucker said.

The Wild needed a strong third period after playing fairly ragged through the first 30 minutes. Minnesota had just one hit in the first period and seven turnovers through two periods as the Sharks, despite being outshot all evening, climbed in front.

But the Wild did exactly what coach Mike Yeo wanted.

“What’s real important for us is another emotional win,” Yeo said, noting that two comeback victories in succession demonstrated that his team has, perhaps, has “learned a lesson.”

Pominville was a minus-2 before scoring the clinching shootout goal, but said the key statistic after some sloppy early play was the win.

“We didn’t have much going on,” he said. “We stuck with it. Again, it shows the type of locker room we have.”

Here are a few elements of what they have: Vanek, still without a goal this season, now leads the Wild with seven assists. Zucker scored a point in his fourth consecutive game. Goalie Darcy Kuemper stopped 25 of 28 shots and raised his record to 5-2 with a 1.70 goals-against mark. Koivu scored just his second goal of the season but won 22 of 28 faceoffs, put nine shots on goal and scored his 37th shootout goal.

The captain came in for special praise from Yeo.

“Every aspect of his game I was really impressed with,” Yeo said. “He was good at both ends of the ice and, no question, he was a strong leader for us.”

Yeo also liked the play of the Broziak-Vanek-Justin Fontaine line.

“Those guys were moving,” he said.

Brodziak insisted it was a team effort.

“You look at our lineup, everybody seems to be going,” he said. “Now, when I get back in, it’s definitely fun to be a part of it.”