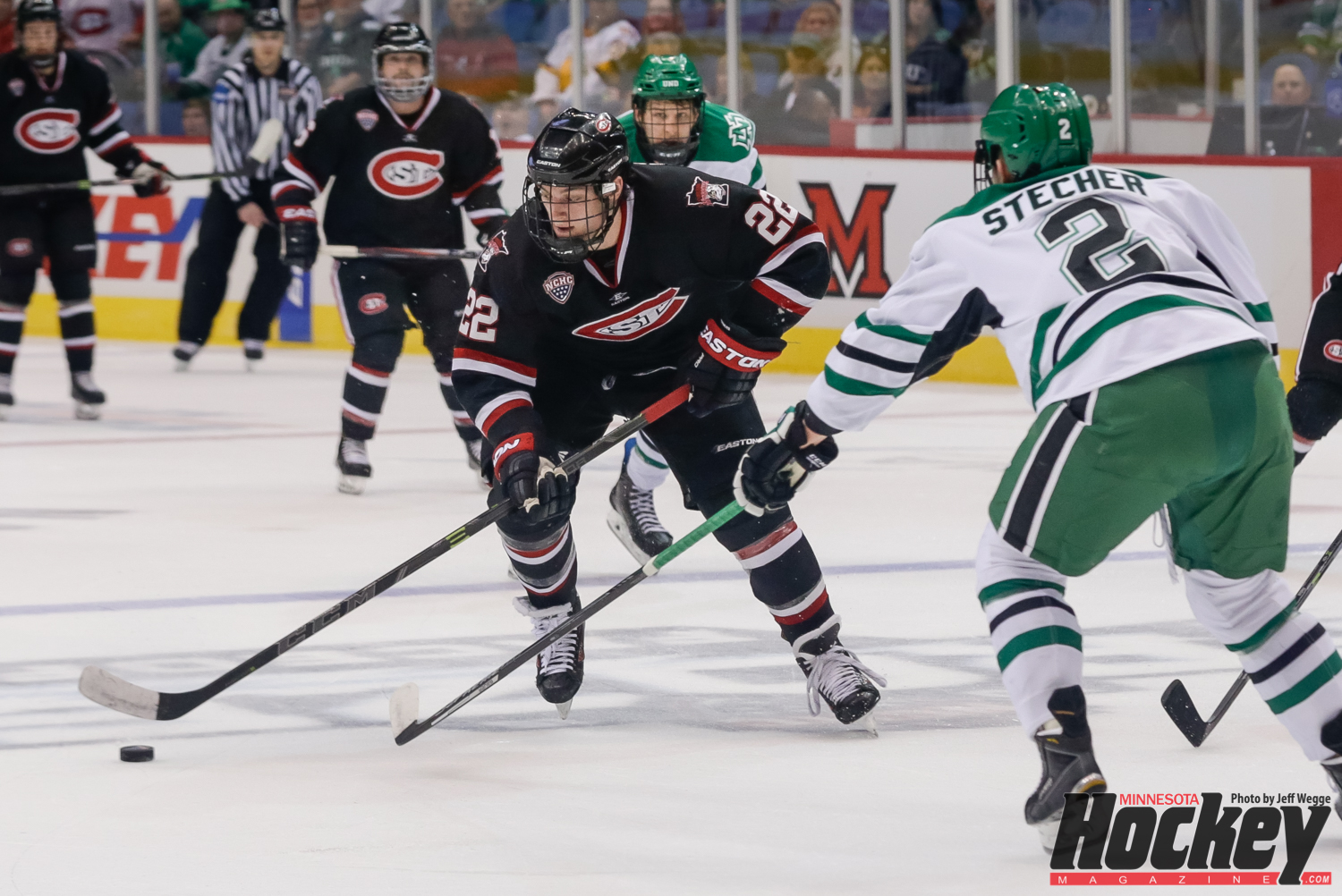 Jonny Brodzinski and St. Cloud State get a second opportunity in just over a week to knock off North Dakota in Saturday’s West Regional final in Fargo for a trip to the Frozen Four. (MHM Photo / Jeff Wegge)

“We live to fight another day,” smiled Motzko, whose third-seeded Huskies had just upset second-seeded Michigan Tech, 3-2 in overtime in the NCAA West Regional semifinal at Scheels Arena in Fargo.

It was the second consecutive season — and third time since 2010 — that St. Cloud State had played an overtime game in the regional semifinals. That experience was key to winning according to Motzko.

Well, that and Jonny Brodzinski.

Shaking off an ankle injury, the Huskies’ junior tied the game with just 37.3 seconds left, forcing overtime. His bad-angle shot deflected off the near post, ricocheted off the defenseman’s shin pad, and slid past Tech goaltender Jamie Phillips.

“I kind of got lucky, but it might’ve went in a little cleaner than I think,” said Brodzinski after describing the play in all its pinball glory. The former Blaine (Minn.) High School sniper netted his team-leading 21st goal of the season and 64th of his career — and counting.

“Jonny,” Motzko paused. “That’s what Jonny does. He shoots the puck.”

St. Cloud State’s Judd Peterson capped off the rally, scoring the game-winner on a rebound in overtime. As relieved as Motzko and the Huskies were following the game, there was plenty of tension earlier.

Late in the first period, a collision in the corner to Phillips’ right looked innocent enough. But Brodzinski, whose right ankle got twisted under Tech defenseman Cliff Watson, remained on the ice long after the whistle. After a few minutes, he was gingerly helped to the bench, clearly favoring his leg. The Huskies’ bench, with the team already trailing 1-0, was as silent as Motzko had ever heard it.

“Guys like that don’t stay down,” said Motzko of his leading goal-scorer. “I think they thought, ‘What do we do now?’ Because he means so much for our team.”

Brodzinski tested the ankle out later in the period, but the experiment didn’t last long. After getting treatment during intermission, he felt better. Starting the second period, Brodzinski had a simple message for his teammates.

“I didn’t think there was a question that I was going to play. If we didn’t win, this was our last game,” said Brodzinski. “I was trying to do everything I could to make the pain go down and get back out there for the guys.”

In Brodzinki’s absence, the Huskies started to go with an extra right wing, shifting Joe Rehkamp over to center. The line juggling resulted in choppy play — and not a whole lot of offense.  Michigan Tech outshot St. Cloud State in each of the first two periods, 15-8 in the first and a wide 14-1 edge in the second period.

Brodzinski’s return settled down the Huskies, however, as they outshot Tech 10-4 in the third period and scored the game’s final two goals.

“In the third period, when Jonny started to raise his game, the whole team raised its game,” said Motzko.

Peterson talked about Brodzinski’s character and the boost it gave the Huskies. “It almost gives us an extra push to keep fighting, seeing what a guy like him is doing and battling through,” said Peterson.