Brykaliuk & the Bulldogs Ready to Surprise 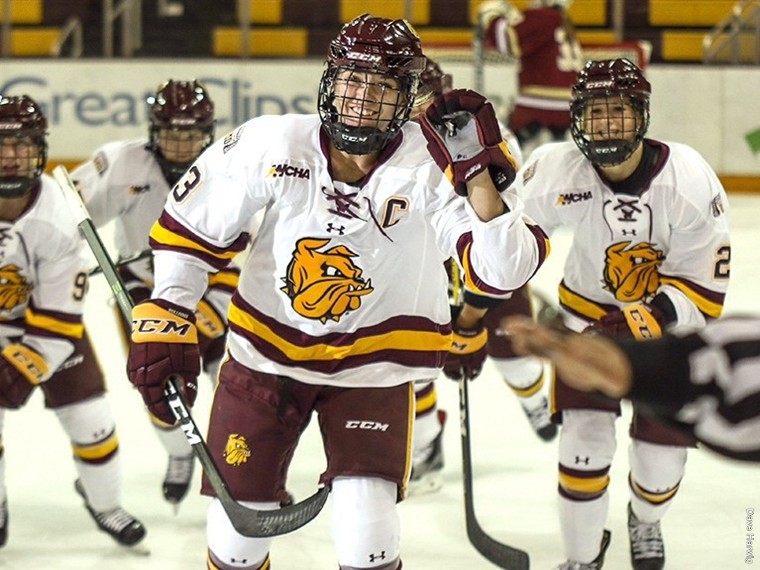 The 2016-17 women’s hockey season has already brought a pleasant slate of surprises across the nation. Inside the WCHA, the dominance of Wisconsin and Minnesota is in question. Last year, only North Dakota was able to best them both. This year, early though it may be, the conference divide is not nearly as stark.

One of the biggest challenges is the resurgence of the Minnesota-Duluth Bulldogs, who are ranked third in the USA Today/USA Hockey and USCHO coaches polls as of Halloween.

That’s a significant rise for a team that was unranked to start the year. Their early schedule hasn’t been easy, but they’ve risen to the challenge, going 1-0-1 against Boston College, 0-1-1 against the Gophers, and taking series sweeps against Bemidji State (No. 10), Ohio State, and Minnesota State.

Co-captain Ashleigh Brykaliuk is a big reason for their early success.

Opening weekend the senior forward was named WCHA Offensive Player of the Week, scoring four goals and an assist against the then no. 3-ranked Boston College Eagles.  “I think we’re surprising a lot of people in the country,” she said following an Oct. 14-15 series at Minnesota. “But I think we knew coming into the year, after a good summer of training, that we had a special team this year.”

Her play in the early going has made her one of the conference’s most dangerous scoring threats on UMD’s top line with fellow standout Lara Stalder. “You hold your breath when Stalder and Brykaliuk have the puck,” Gophers coach Brad Frost said after a hard-fought win over the Bulldogs. Both are averaging over a point per game and rank among the top scorers in the nation.

The depth in Duluth is certainly an area of growth. Their scoring prowess goes beyond Stalder and Brykaliuk, with Katerina Mrázová, Katherine McGovern, and speedy freshman Sydney Brodt all proving to be threats early in the year. On defense, they’ve got rocks like Sidney Morin and they’re getting outstanding goaltending from sophomore Rooney.

For Brykaliuk, it’s her last shot at bringing a title back to Duluth, a program whose five national championships rank second all-time. But they haven’t captured one since 2010 and have only qualified for the NCAA Tournament once in that span, an appearance in which they didn’t make it to the Frozen Four. They’re looking to turn that around under second-year coach Maura Crowell.

“It’s more emotional this year when we go on road trips. Coming to these rinks for the last time definitely has a little more fire burning under my butt,” she said in Minneapolis. She describes herself as a “quiet leader” who leads by example, but she’s looking for ways to make sure the team capitalizes on their growth. “Our whole senior class, we have a strong class, we all feel that way. We’re trying to relay that feeling down to the rest of the girls, because it’s hard to feel unless you’re in that spot.”

With the way the Bulldogs have managed to start the year, she’s not having trouble impressing on the younger players that there’s something special brewing in Duluth. “I think most of the girls know we have a special team this year,” she said. “I think that’s just a feeling you get when you’re on teams. All the girls, they’ve been on teams their whole lives. You know when you have something special.

“It’s just the start of the year so far, but the coaches know it, we know it, even the younger girls, they feel it too. They’re on board with us.”

Other teams around the conference know it as well. It’s clear many have underestimated the growth the program has gone through and the kind of force they could be this season. The modest co-captain knows teams have their eye on them, but she’s not one to overplay her hand. “I think we’re off to a decent start,” she said.