BSU represented twice among WCHA Players of the Week 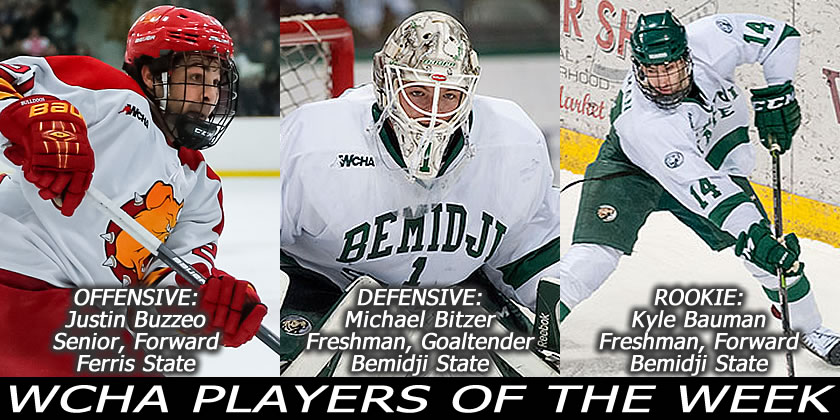 WCHA Offensive Player of the Week

Buzzeo had a big weekend in leading Ferris State to a WCHA road sweep at Alaska Anchorage, finishing with three goals (on five shots), two assists and a team-best +5 rating. The senior from Windsor, Ontario picked up an assist on the game-winning goal in FSU’s 4-1, Thursday night victory, before adding his own score in the third period. Buzzeo factored in all three Bulldog goals in a 3-2 triumph Saturday, assisting on the first before netting a pair of strikes in the third period – including the game-winner. His efforts helped lift Ferris State into sole possession of fourth place in the WCHA standings.

WCHA Defensive Player of the Week

Bitzer recorded 119:55 of scoreless hockey and posted consecutive shutouts to lead Bemidji State to a WCHA series sweep over rival Alabama Huntsville. The freshman from Moorhead, Minn. turned aside all 42 shots faced over the weekend in a pair of 4-0 victories, his first two collegiate shutouts. Bitzer, who made 18 saves Friday and 14 on Saturday, backstopped a BSU penalty-kill unit that held the Chargers scoreless on seven power-play opportunities. He is now riding a scoreless streak of 179 minutes and 23 seconds, dating back to the first period of the Beavers’ Dec. 13 contest.

WCHA Rookie of the Week

Baumann helped Bemidji State to a sweep of WCHA rival Alabama Huntsville by factoring in both game-winning goals, tallying three points (tied for tops among all league rookies) and finishing with a +3 rating (best among WCHA freshmen last weekend). The rookie from Apopka, Fla. assisted on the game-winning score Friday evening and then scored his first collegiate goal with a second-period strike. On Saturday, Baumann’s first period goal served as the deciding score in the Beavers’ second consecutive 4-0 win. Baumann’s two goals came on five shots, while he also added a block.