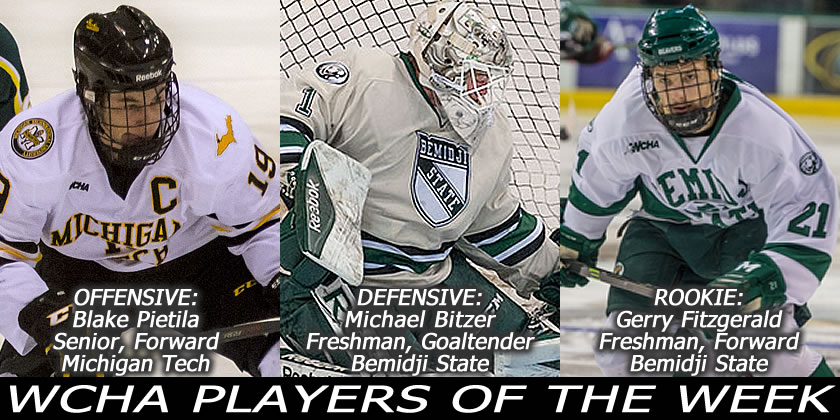 Pietila had three points, including Friday’s overtime game-winner, in Michigan Tech’s WCHA sweep of visiting Alaska. The senior from Brighton, Mich. helped jump-start the Huskies’ comeback from a 3-1 deficit by assisting on MTU’s first third-period goal, then netted the game-winning score 2:46 into the extra stanza. His second period, power-play strike Saturday tied the contest 2-2 en route to a 3-2 MTU victory. The New Jersey Devils’ draft pick has a goal in three straight games (four goals and an assist), and now has 10 goals and nine assists overall this season.

Bitzer earned tournament Most Valuable Player honors after backstopping Bemidji State to a pair of wins and the North Star College Cup championship at the Xcel Energy Center. The freshman from Moorhead, Minn. allowed just one goal in 120 minutes of play against a pair of top-10 opponents, stopping 54-of-55 shots faced for a .982 save percentage. Bitzer collected a career-high 28 saves in a 4-0 shutout over No. 7 Minnesota Duluth in the opener, before posting 26 saves in the 3-1, Championship Game victory over No. 1 Minnesota State.

Fitzgerald collected two points and finished with a +3 rating, helping Bemidji State to victories over the No. 7 and No. 1 teams in country at the North Star College Cup. The rookie from Port Alberni, British Columbia assisted his brother, Leo, on a goal early in the second period of a 4-0 win over Minnesota Duluth on Friday, then scored the game-winning goal – the second of his collegiate career – in Saturday’s 3-1, Championship Game triumph over top-ranked Minnesota State.