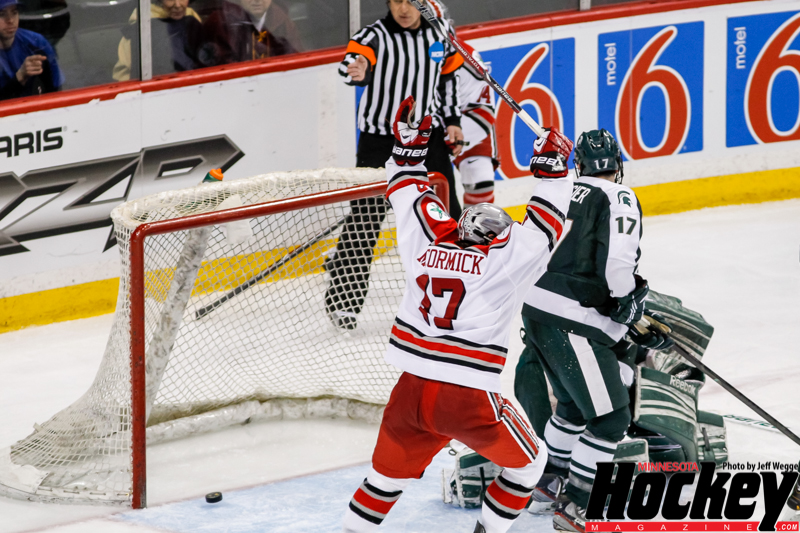 SAINT PAUL—Ohio State and Michigan State have a recent history of failing to decide games in regulation when they meet. Thursday night’s Big Ten hockey tournament quarterfinal clash between the two schools at Xcel Energy Center proved it’s a hard habit to break.

The No. 4 Buckeyes and No. 5 Spartans found themselves deadlocked after 60 minutes for the fourth straight time this season but OSU freshman defenseman Drew Brevig’s shot through a mass of MSU players snapped the tie 4:23 into overtime.

The Lakeville product’s third goal of the season lifted Ohio State to its third straight victory in the series and into a semifinal matchup with top seeded Minnesota on Friday night.

“I don’t know if you expected anything different between these two teams,” Ohio State coach Steve Rohlik said. “We just knew there was going to be no shootout.”

After Ohio State forward Max McCormick’s wraparound attempt slipped through the crease, Spartans’ goaltender Jake Hildebrand, who finished with 32 saves, dove to his left to smother the loose puck.

“It was a one-shot game, all of our games with them have been,” Michigan State coach Tom Anastos said. “Unfortunately, they got the one shot that mattered.”

Brevig, who was playing in front of a horde of family and friends, was excited he and his teammates were able to come through for them.

“It was pretty awesome, especially at that time in the game,” Brevig said. “I was glad the puck found its way through there.”

When the game began, however, the Buckeyes had difficulty even getting pucks to the net, much less in it. OSU did not register a shot on goal for the game’s first nine minutes and by then were trailing 1-0 on Greg Wolfe’s 13th goal of the season for the Spartans at 4:04.

The situation left Rohlik, the former Hill-Murray high school star (1983-86) who also coached the Pioneers (1992-97), frustrated and searching for answers. He knew of one option definitely not at his diposal.

“Well, we couldn’t punt,” Rohlik cracked. “I think our guys were on a big stage and played like it. I tip my hat to Michigan State; they were all over us.”

Ohio State junior forward Tanner Fritz, who set up Brevig’s game winner, confirmed his coach’s assessment. “We were a little bit nervous at the start, a little tentative,” he said.

With the aid of a couple of Michigan State penalties, the Buckeyes built some momentum late in the first. That carried over into the second when Ohio State finally got on the board on Fritz’s seventh goal of the year at 16:26.

After its rough start, OSU outshot the Spartans 27-19 over the final two periods and overtime and 34-27 for the game. Buckeyes’ goaltender Christian Frey stopped 26 Michigan State shots to earn the win.

“I didn’t like our start, but I thought we responded after the first period and had a good second, third and overtime,” Rohlik said. “I thought our guys started to get their legs.”

“It was a hard-played game,” Anastos said, “I thought we got off to a good start. Certainly Ohio State turned it up a notch in the second period.”

But, as Rohlik pointed out, the Spartans certainly made the Buckeyes earn everything they got in the victory.

“They’ve got a great goaltender and they’ve got everybody that’s on the ice buying in to keep that puck out of the net,” Rohlik said. “That’s why they’re tight games [against OSU], they’ve done that all year.”

Anastos, however, knew this is one that got away from his team.

“I was really hoping after we got off to that one-goal lead, we could have built on it,” Anastos said. “We never could get over that hump. That would have been big for us.”