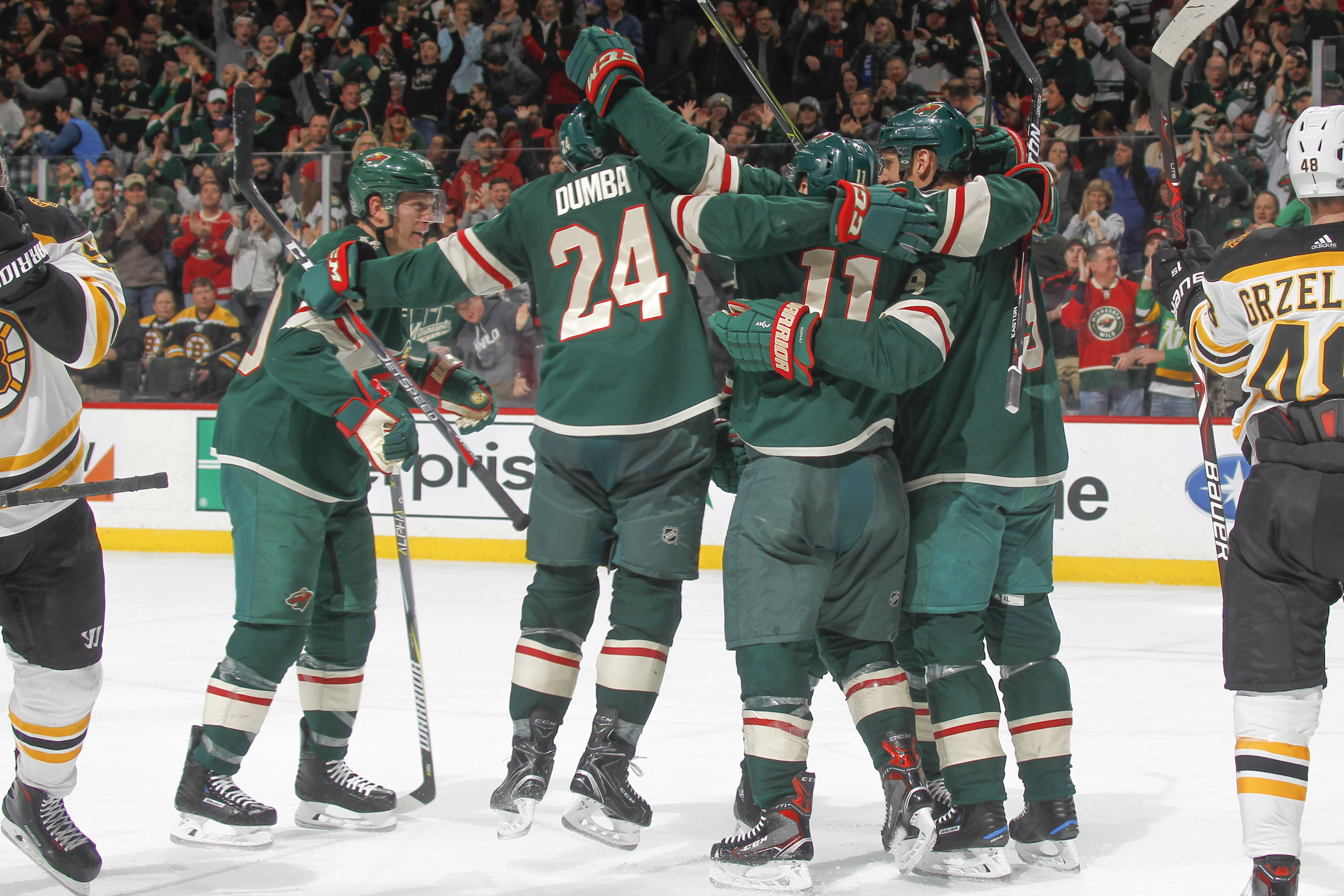 St. Paul – The Wild appear to be decent bet to make the playoffs after picking up one point in a 2-1 overtime loss to the Boston Bruins Sunday night, but nothing is certain.

The only sure thing, after they defeated Nashville, Vegas and Arizona and dropped overtime decisions to the Bruins and Los Angeles Kings in their past five starts, is that they should step into postseason play feeling as if they are well prepared.

“That is probably the most playoff-like game we’ve played all season,” forward Daniel Winnik said Sunday.

Indeed it was, much to the delight of a thoroughly entertained Xcel Energy Center crowd of 19,183.

“It was a big point for us,” Wild coach Bruce Boudreau said. “Going 3-0-2 in the last five, we’re holding our own. We’re not going anywhere fast, but we’re going in the right direction.”

The Wild fell behind 1-0 in both of the back-to-back home games against Nashville and Boston, two of the top three teams in the NHL, but rebounded in both, beginning with a 4-1 victory over the Preds.

“I think if you said going in we’d get three out of four points against two of the very best teams in the NHL, we’d be happy about it,” Winnik said, noting that failing to get the fourth point Sunday stung a bit. “But I think overall, it was a very good effort.”

Minnesota, which upped its season total to 93 points with seven games remaining, stood third in the Central Division through Sunday’s games but maintained very little breathing room ahead of Colorado and St. Louis.

Mikko Koivu’s goal midway through the third period tied the score Sunday in the tightest of games — Boston outshot the Wild 28-25 and neither team was willing to yield even an inch of space.

“This time of year, teams are really buckling down, especially playoff teams,” Wild goaltender Alex Stalock said. “They’re playing the way they want to play in two or three weeks. I think you see how tight games are going to be; it’s a bounce here or there and that’s the difference.”

The Bruins got the decider when Brad Marchand beat Stalock just 28 seconds into overtime of a game in which both team had potential goals disallowed. David Pastrnak got Boston started with a goal 3:15 into the second period.

Before that and after, the ice was filled with one puck battle after another.

“They’re a difficult team to play against because they’re in your face all night long,” Boudreau said. “They push you to the limit.”

That’s how it seems every night these days, as Minnesota prepares for another game against the Predators on the road Tuesday and then two against the Dallas Stars.

“We’re playing against really good teams right now,” winger Zach Parise said. “We’re managing to get points, but it sure would have been nice to get that other one.”

Things are a far cry from five months ago.

You night remember, the Wild started the season 5-7-2 and often looked out of sync. However, improved play from guys like Joel Eriksson Ek, Nino Niederreiter, Marcus Foligno, an injury-free Parise and Winnik has helped provide a boost to an offense mostly relying previously on Eric Staal, Jason Zucker, Mikael Granlund, Ryan Suter and Koivu.

Minnesota needs them all as the end of the season looms.

“It’s going to be tight the rest of the way,” Stalock said. “We’ve got to win games. We’ve got seven games to go, and we need all the points we can get.”