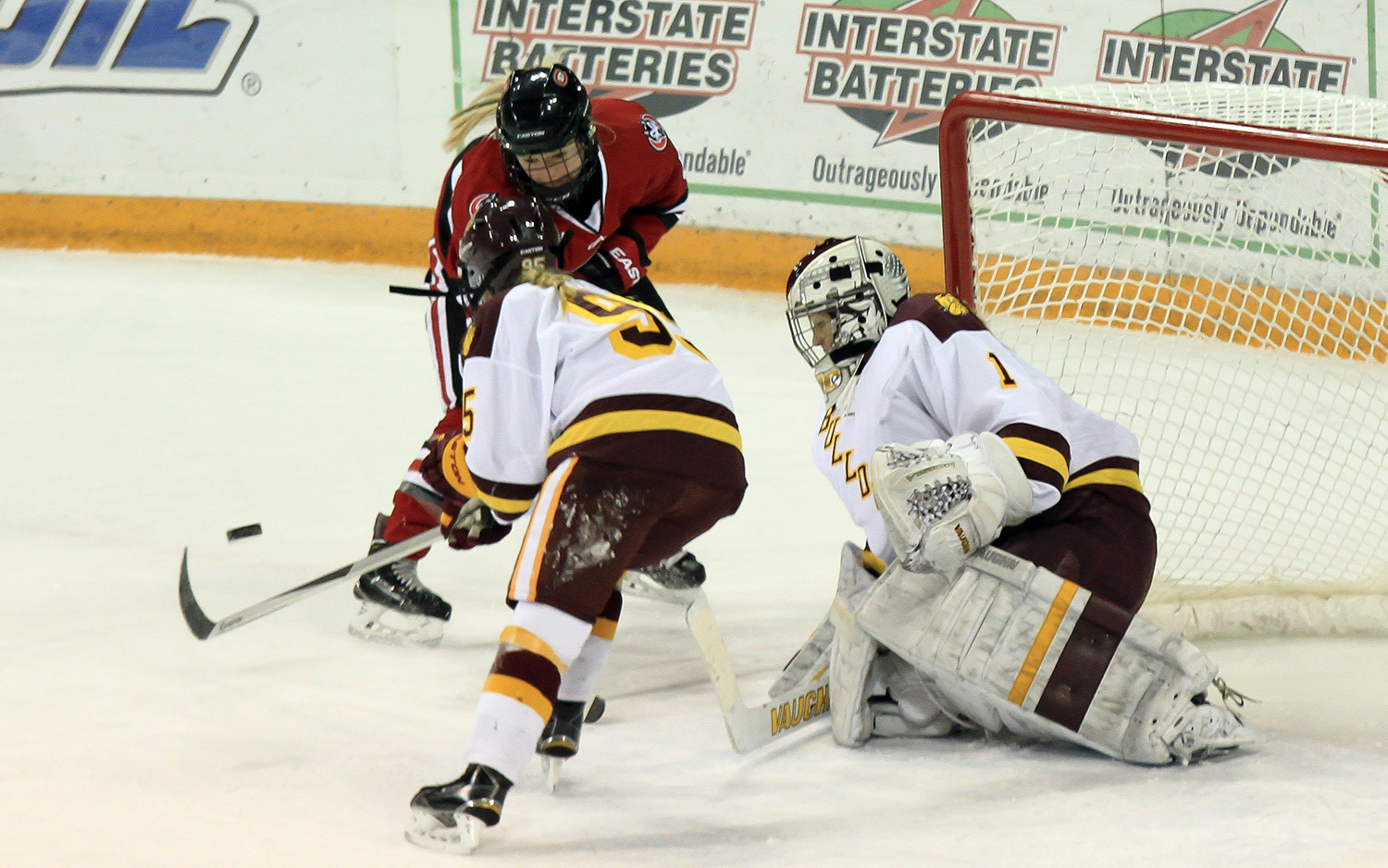 Minnesota-Duluth goaltender Kayla Black blockers a puck away for one of her 23 saves in a shutout effort vs. St. Cloud State. Black recorded her 7th shutout of the season and 16th career shutout in the Bulldogs win. (Photo / Dave Harwig, special to MHM)

DULUTH – The St. Cloud State Huskies came into Duluth hoping on Hockey Day in Minnesota hoping to get themselves back in good standings after losing 12 of their last 13 games while the Bulldogs hoped to thwart that effort.

That being said, the Bulldogs came into the weekend as a statistical favorite, but with some concerns of their own after splitting last weekend’s series with Bemidji State, the very same team St. Cloud State defeated the week before.

“You have to be prepared to work,” said Bulldogs coach Shannon Miller. “In our first period, we just played, we didn’t compete and when you do that you get yourself into trouble.”

UMD opened the first period with a goal from left wing Katherine McGovern just under two minutes after puck drop, her first of the season. From there things stayed fairly even offensively, with each team recording only five shots in the first period despite UMD attempting 15, seven of which St. Cloud State blocked in the first frame.

“Every team in our conference is good, so you need to expect a lot of pressure,” said Bulldog center Lara Stalder. “They’re a hard working team so we knew the way they were going to be coming out. We didn’t figure it out in the first period. We need to find that killer instinct in us.”

The second period was scoreless but both teams picked up their offensive efforts, more than doubling their respective shot totals to end the period UMD-18, St. Cloud-13.

The Bulldogs’ Katerina Mrazova was awarded a penalty shot in the early third period, but waited too long to take a shot as she came in on Huskies’ Julie Friend who would make the save to keep her team within one.

However, Friend wasn’t able to stop the shot of a wide open Lara Stalder who doubled the UMD’s lead with 11:49 left to go in the match up. Stalder sent a one timer over Friend’s right shoulder from the edge of the crease after defenseman Brigette Lacquette weaved through traffic from the blue line to send the puck down.

The Huskies answered back with offensive pressure of their own as St. Cloud State coach Eric Rud pulled Friend with nearly four minutes remaining in the game. While the Huskies were able to get more pressure on the Bulldogs, they were unable to crack UMD’s Kayla Black, who made 23 saves on the outing, earning her seventh shutout this season.

“She came up big for us again,” Stalder said of her goaltender. “We need that trust in our goaltender and we have it right now so that’s great.”

The women will face off again on Sunday at 3:07 p.m. at AMSOIL Arena in Duluth, Minnesota for the second half of their weekend series.