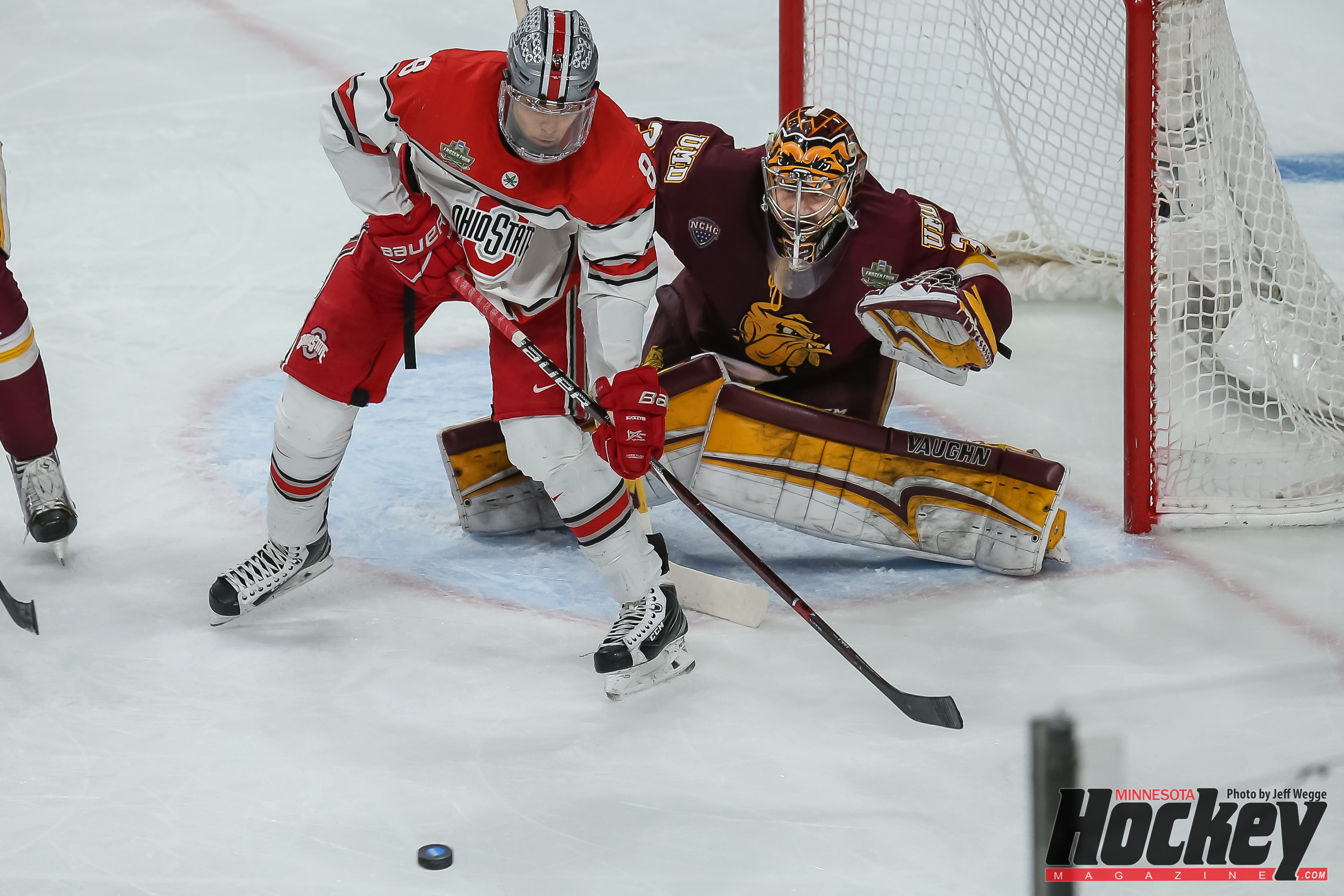 The theme of UMD’s run to the title game has been its young defensive corps that had to regroup after losing five of its members to graduation or pro contracts with five freshmen, but the Bulldogs had to replace a goaltender, too.

Shepard was Hunter Miska’s backup when UMD went to last year’s national championship game in Chicago. Miska, a freshman in 2016-17, played remarkably down the stretch and signed professionally after the Frozen Four which made the job Shepard’s after winning an early-season battle with Nick Deery.

The measure of Shepard’s success during the tourney run hasn’t necessarily been shutouts, although he did post goose eggs in UMD’s NCHC first-round sweep of Western Michigan and he has the second-most shutouts in the nation this season with eight.

But this NCAA tournament, he doesn’t needed to put up gaudy save totals because he hasn’t needed to. Shepard stopped 19 shots against Minnesota State-Mankato in the first round and 11 against Air Force in the region final.

“I only have to make 3-4 key saves against a quality opponent and that’s my job,” Shepard said, sitting back in his stall after a postgame stretch with a wad of gum in his mouth and a towel around his neck.

“I just need to make decent saves at key times and manage the game from there.” 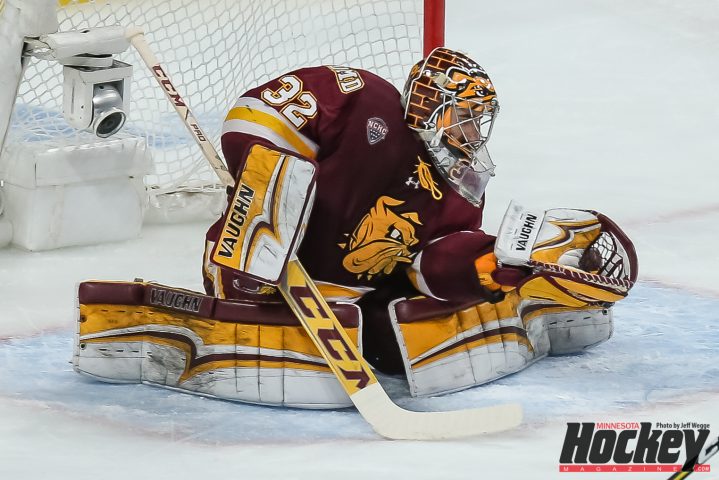 Shepard has the nation’s eighth-best goals against average (1.93) and 10th-best save percentage (.924). The UMD defense performed in the first period Thursday like it had at the West Regional two weeks prior in Sioux Falls with suffocating defense that kept attempted shots from turning to shots on goal.

In addition to the six goalless periods that Shepard delivered, the defense held opponents without a shot in one period in each of the Bulldogs’ regional wins. UMD held the Buckeyes to four shots in a UMD-dominated first period that resulted in 17 shots on goal and a 2-0 lead for the Bulldogs.

Of course, Shepard will be the first to pay homage to his D.

“The way we play defensively, teams don’t shoot the puck all the time,” Shepard said. “We’re good on our gaps, our guys are up on their guys and there aren’t a lot of lanes for them to shoot.

Though OSU increasingly sustained offensive pressure as the game went on, Shepard seemed to tighten the seal on his net more and more.

He committed robbery in the first two minutes of the third period, victimizing both Brendon Kearney and Lakeville native John Wiitala. Kearney was on the doorstep of the crease with an attempt to redirect the puck, but Shepard’s right pad blocked it. Shepard sprung across the crease to stop Wiitala’s rebound attempt with the left pad.

“I was on the post and I gave the guy in front of me a quick shoulder check,” Shepard said. “I slid to my right and made the save. All I did then was make a little push over and tried to stay in position and the guys cleared it away.

“It wasn’t a very easy to play to clear because it was so bang-bang. It was (Ohio State’s) best opportunity of the third period).”

On a penalty kill as a result of a Riley Tufte elbowing penalty, Shepard moved left across the crease to rob OSU captain Mason Jobst with the left pad and stick on a one-timer from the left circle.

But Shepard’s bid for his first shutout since the Western Michigan series was ripped up following a Nick Wolff tripping penalty on a Tanner Laczynski wrist shot that put the Buckeyes on the board with his 17th goal of the season with 10:33 left in the game.

But that was it. The Buckeyes couldn’t find a way to penetrate the UMD defense to get the puck to puck to Shepard, much less past him.

With last season’s title game experience, Shepard has an idea of how to spend the next 40 hours.

“I just stay in a routine doing what you do two days before a game,” Shepard said. “Staying in a routine is probably the biggest thing for me and just be ready to go Saturday.”