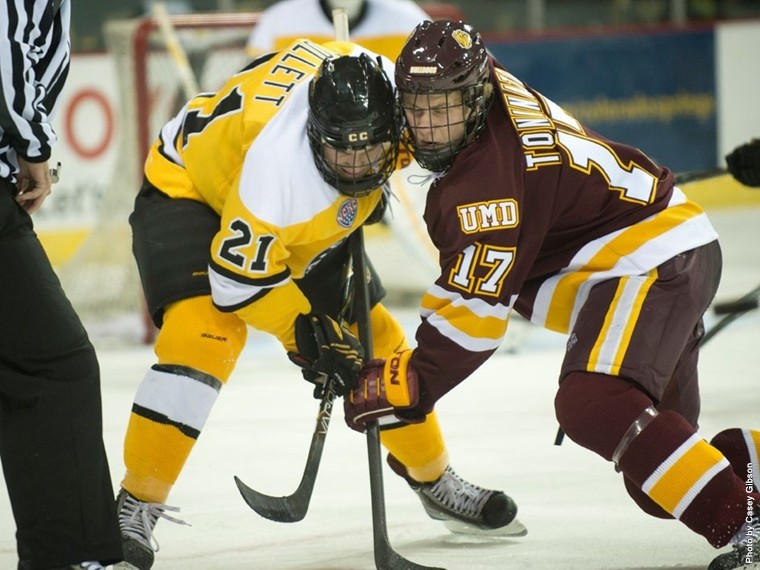 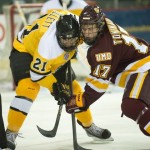 Family season tickets got Dom Toninato and Adam Krause into the DECC for most Minnesota-Duluth hockey games when they were kids growing up in the Duluth area.

“Growing up, I don’t think I ever missed a UMD game my whole life if I could help it,” said Krause, who grew up in Hermantown. “The only games I missed were when I had my own hockey games.”

Tonitato and Krause are grown up but haven’t missed a Bulldogs game yet this season, now suiting up for the hometown team.

“We had season tickets when I was a kid and we never really missed a game unless we were on the road for hockey,” Toninato said. “UMD was at the top of the list. I couldn’t leave home because it’s a great place to play and I liked going to the rink to watch UMD play.”

Krause, a right winger, is the captain and scored two goals to help UMD beat North Dakota, 6-3, Saturday on the road and salvage the series split.

Krause is used to playing the grinder role but Saturday, he was able to showcase his shooting accuracy. He scored on a one-timer from the slot trailing on an odd-man rush in the first period. In the third period, he was open in the slot and ripped another one-timer into the net.

“Tonight was the first time since I’ve played here that I was on a first scoring line,” Krause said. “I’ve been a grinder but Coach (Scott Sandelin) gave me an opportunity and I was able to capitalize. Hopefully I can stay on that line.”

The win improved the Bulldogs to 5-4-1 overall and 2-2-0-0 in the NCHC after two consecutive losses.

“We have to just keep working and the effort has to be consistent,” said Toninato, a center who entered Saturday’s game with a four-game point streak.

“We have to get that fire going on Fridays and keep it rolling into Saturday night.”

Toninato has two goals and three assists in 10 games and is one of three former players from Duluth East. Forward Max Tardy and defenseman Andy Welinski also played for the Greyhounds.

Defenseman Tim Smith grew up across the harbor in Superior, Wis.

“If we have top (high school) players in our area, we want to get them in our program,” UMD coach Sandelin said. “It’s really important to get kids like that, especially if they fit in your program and these kids have so far.”

The Bulldogs have two more recruits coming in via the local pipeline – Hermantown’s Neal Pionk and Karson Kuhlman, a forward from Cloquet who left high school hockey after his sophomore season to play for Dubuque of the USHL.

“It was my dream to grow up and play for the UMD Bulldogs,” Krause said. “When I was a kid, those guys were the best hockey players in the world to me.”