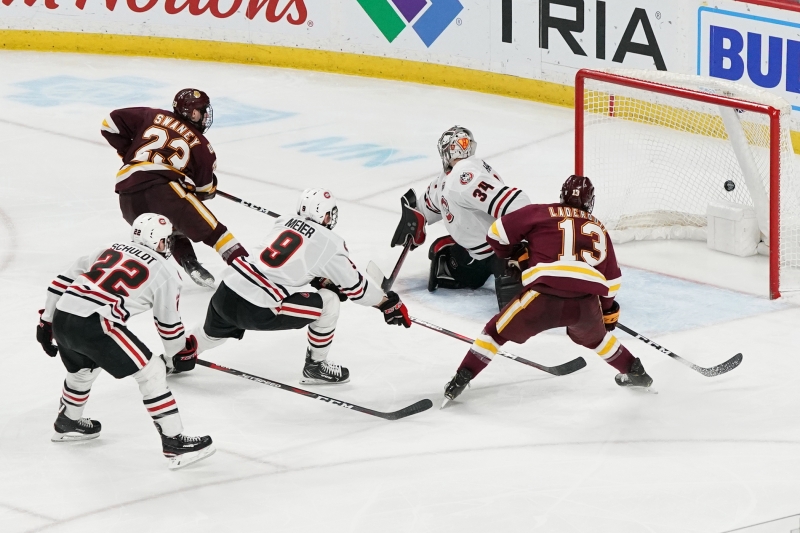 St. Paul — With their NCAA tournament seeding secured and only Minnesota Duluth’s region placement fate to be determined there would not seem to be much to play for between St. Cloud State and UMD on a late March Saturday night in St. Paul. Don’t tell that to the Huskies and Bulldogs, though, as the two in-state, intra-conference rivals went at each other hard and fast in the first-ever NCHC Frozen Faceoff championship overtime game at Xcel Energy Center.

“Anytime you get the top two teams in the country in the same building you know you’re going to have a good game,” UMD forward Billy Exell said. “When you get into these battles both teams are preparing and they don’t want to lose.”

But someone must lose and, in this battle between two NCAA tournament top seeds, Minnesota Wild prospect, and Lakeville native, Nick Swaney scored the game winner at 7:29 of overtime to give Minnesota Duluth a 3-2 win over the Huskies. The Bulldogs captured the school’s second Frozen Faceoff title overall and first since beating North Dakota 4-3 in the 2017 championship game.

“It’s certainly exciting to to win this championship again against a great team,” Minnesota Duluth coach Scott Sandelin said. “It didn’t look so good early but our guys just stuck with it and kind of grinded through it and found a way. We’ve played five times this year and we’ve had unbelievable games with them so I have a lot of respect for their team.”

Despite his team coming up short, first-year St. Cloud State coach Brett Larson, who until this season was an assistant under Sandelin at UMD, expressed what most observers of the game would say, regardless of the result.

“For me, being around college hockey for a long time, that was one hell of a hockey game,” St. Cloud State coach Brett Larson said. “Two unbelievable teams getting after it and if you’re a fan college hockey you like that one for sure.”

“He made a great pass and I was fortunate to find the back of the net,” Swaney said of Laderoute. “It was all him.”

Swaney nearly did not get the opportunity to be the hero as the Bulldogs trailed the Huskies 2-1 with less than five minutes to play in regulation and Jacques in the penalty box serving a tripping penalty. But that’s when the UMD penalty kill, which limited SCSU to just one goal on six power-play chances, made its biggest play of the night.

Laderoute took advantage of a poor cross-ice pass by Jack Achan in his own zone, stole the puck and fed Exell between the circles who buried just his second of the year with 4:51 remaining to tie it up and eventually send the game to overtime.

Even that goal may not have mattered had a bounce not gone UMD’s way in the third period.

After a scoreless second period, the Huskies started the third with 47 seconds of power-play time but only needed 28 seconds of it when Patrick Newell corralled a loose puck in the high slot, spun 180 degrees and fired a shot through traffic which beat Shepard for a 2-1 St. Cloud State lead.

St. Cloud State nearly made it 3-1 midway through the final period when Blake Lizotte’s shot hit iron and the puck traveled post-to-post without going in. The official behind the net initially ruled it a goal but, after a lengthy review, the goal was overturned.

Newell said the Huskies, winners of 13 straight coming into the game, learned at the right time they are not invincible.

“We came with a 12 or 13 game win streak, two of those games were against that team and credit to them for for a hell of a battle,” Newell said. “Obviously, this one stings and it’s something that we really wanted to get done but, you know, luckily for us there’s more hockey to be played and that’s what we’re going to look forward to this week.”

The familiar foes were all square at 1-1 after 20 minutes with the Huskies applying heavy pressure to the tune of a 15-6 shots on goal advantage while the Bulldogs applied plenty of heavy hitting. Shepard stood tall in the opening period, keeping UMD close with 14 saves despite plenty of traffic in front of him.

“Well we didn’t have the puck in the first period so we had to do something,” Sandelin said of UMD’s physical opening period.

The Huskies struck first on a delayed tripping penalty on UMD’s Peter Krieger when Robby Jackson pounced on a rebound to tap in his 19th goal of the season at the 7:45 mark.

“We loved our jump, we were winning races to puck, we were getting there first.” Larson said.  “We had gone through four line changes before they had gone through two and hemmed them up in their zone pretty good.

“After that first 10, 12 minutes, I thought it was real even, really good hockey game but we really liked the momentum we created with the start.”

Per NCHC rules, Krieger still had to serve his time so SCSU was immediately a man up after Jackson’s goal. UMD’s physical play rolled on through the power play but it ultimately cost them when Louie Roehl was tagged for boarding with four seconds remaining on Krieger’s penalty. The officials reviewed Roehl’s hit but determined it not severe enough to be classified as a major.

With the teams skating 4-on-4 due to an Easton Brodzinski tripping call, St. Cloud State’s Nick Perbix nearly doubled his team’s lead when the freshman defenseman found a lane to the UMD net but was denied by Shepard. Just 14 seconds later, however, Minnesota Duluth picked up the equalizer on sophomore defenseman Mikey Anderson’s fifth of the season.

UMD’s Parker Mackay banked a drop pass off the right wall in the SCSU zone to Scott Perunovich whose backhand pass found Anderson just off the bench and streaking across the blue line. Anderson quickly launched a blast from between the circles past Hrenak’s outstretched glove with 9:11 remaining in the period.

St. Cloud State and Minnesota Duluth head into the NCAA tournament next week as the top two overall seeds with Minnesota State right behind for a Minnesota top-3 sweep. The Mavericks rallied from a two goal deficit with under two minutes to play at home against Bowling Green on Saturday to win the WCHA championship in overtime as well.

“It was a big win for our guys,” Sandelin said. “It’s really exciting to move into the tournament after a win like this tonight.”