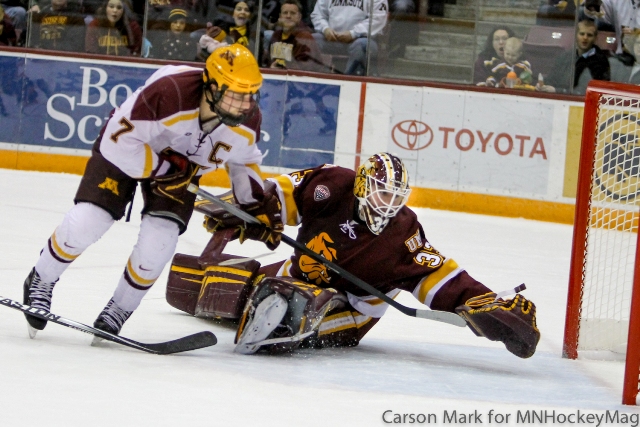 UMD goaltender Kasimir Kaskisuo makes one of his 17 saves in the Bulldogs’ 3-0 win over Minnesota on Nov. 14, 2014 at Mariucci Arena in Minneapolis. (MHM Photo / Carson Mark)

MINNEAPOLIS – The two had met 224 times previously. Minnesota strongly held the edge with a 134-73-17 all time record before Friday night. But when it came time for the puck to drop on the 225th meeting between No. 1 Minnesota and No. 13 Minnesota-Duluth, it was all Bulldogs as they captured a 3-0 victory.

UMD set the tone early, using its first power play of the night to take a 1-0 lead. It was all they really needed. At the 2:07 mark of the first, with the game still in its infancy, UMD forward Austin Farley tapped home a loose puck in the crease off an Andy Welinski point shot that Gophers’ goaltender Adam Wilcox couldn’t fully reel in.

The goal set the tone for the rest of the period and game. UMD limited Minnesota’s chances and maintained possession in their offensive zone. The effort brought an abrupt end to the Gophers 17-game unbeaten streak on home ice.

Encapsulating the meaning of tonight, as the clock wound down to zero, Farley skated up to freshman netminder Kasimir Kaskisuo and gave him a giant hug, as the rest of the Bulldogs skated in to celebrate. Kaskisuo made 17 saves en route his first career shutout.

“We got a good lead and made it pay off,” UMD coach Scott Sandelin said. “That’s what you need against this team. You can’t let your guard down and I thought our guys did a good job the whole night for the 60 minute game that we needed to play.”

Sandelin did admit his surprise at how the night started — mainly because of how strongly the Gophers normally start. He did add that getting a fast start was something he focused on all week.

Gophers coach Don Lucia wasn’t certain what led to the Gophers slow start, but he noted the early penalty that directly led to Farley’s goal caused things to “go downhill” in the opening ten minutes. As a result the frustration was palpable on Minnesota’s bench, leading to some undisciplined and embarrassing penalties, according to Lucia.

“We couldn’t get anything going all night long. … It wasn’t our night tonight,” Lucia said. “They played very well and deserved to win.”

On the other side of the puck, the Bulldogs used those undisciplined penalties to their advantage, netting two power play goals on the night. While Farley’s counted as the first, forward Dominc Toninato picked up the second man advantage goal, banging home a Farley feed backdoor for the resulting 3-0 score.

Meanwhile, UMD gave up only one power play, which Sandelin credited to moving their feet.

The Bulldogs second goal of the night came off a snipe from defenseman Dan Molenaar, who sent it top shelf through Wilcox. The goal was the first of the sophomore’s career, and it was extra special coming at Mariucci for the Eden Prairie native.

“I’ve played quite a few games here over the years,” Molenaar said. “Now that I actually get to score my first college goal here, it was pretty sweet. I had a lot of family and friends up there. It’s awesome.”

The series shifts to Duluth for Saturday night’s 7 p.m. rematch at Amsoil Arena.