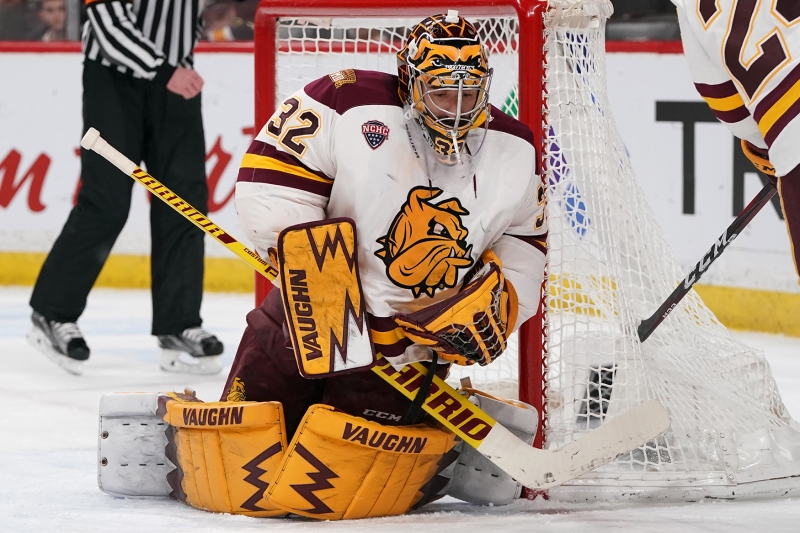 The win sets up an all-Minnesota Frozen Faceoff championship game between the No. 4 Bulldogs (24-11-2) and No. 1 St. Cloud State (30-4-3) on Saturday night. The Huskies knocked off Colorado College 5-2 in the other semifinal on Friday afternoon.

“We played a lot of games that are really, really close and that’s kind of what it came down to again today,” Minnesota Duluth coach Scott Sandelin said. “But it took a good third period for our team to win and we’re excited about playing tomorrow.”

UMD freshman Cole Koepke’s shot past Larsson through a Parker Mackay screen 42 seconds into the third period turned out to be the game’s only goal scored with a goaltender in the crease. Sophomore defenseman Louie Roehl would later score into an empty net and Koepke would add his second of the game, and seventh of the season, into the same vacant Denver goal.

All three goals were unassisted.

Shepard and Larsson matched each other nearly save-for-save through two periods with Larsson making 21 stops to 19 for Shepard. UMD made a hard push late in the second but Larsson stood his ground and denied all comers. Shepard finished with 25 saves with Larsson stopping 30 UMD shots for the game.

“You gotta get in their good goalie’s space,” Sandelin said. “I thought they were doing a pretty good job of that and we weren’t and I thought we did a better job of that in the third period.”

Shepard, meanwhile withstood some flurries of his own and slammed the door on Cole Guttman’s breakaway opportunity 20 seconds into the second period.

“There’s a reason he’s, you know, won awards last night in this conference and I thought he was seeing the puck really well,” Denver coach David Carle said. “Did we have some second chance opportunities? Yeah, but he did a great job sealing the bottom of his net and, unfortunately, we weren’t able to get any past him.”

Added Sandelin on Shepard, “They were doing a good job around our net and that’s what you have to do against good goalie. It was it was nice to see Shep seeing the puck and making some of those saves for us because, again, that game could have gone either way.”

But it was UMD and Kopeke who broke through when the Hermantown native came off the bench, picked up a loose puck and, with Mackay blocking Larsson’s view, ended the stalemate.

“Larsson’s a great goalie and anytime you can try and take the goalie’s eyes away just increases your chance of scoring,” Koepke said. “So I thought Parker’s positioning was pretty, pretty key on that goal.”

Minnesota Duluth and Denver split their four regular-season meetings with Denver winning 2-0 and 1-0 games but this time the tables were turned.

“I thought it was a good hockey game, tight checking, similar to most of our games against Duluth,” Carle said. “There wasn’t a lot of time and space out there, it came down to execution and they made one more play than we did and that was ultimately all that was needed.”

The Bulldogs briefly thought they had taken a 2-0 lead when Jesse Jacques pounced on a loose puck behind Larsson. After a lengthy review, however, the officials ruled Riley Tufte had interfered with Larsson and the goal was overturned.

Minnesota Duluth now turns its attention to St. Cloud State, a team the Bulldogs have dropped three of four games to this season, although all were fairly tight games including a pair of 4-3 losses (one in overtime) two weeks ago in St. Cloud.

“We had two great games with them at the end of the year, so I expect it to be the same thing,” Sandelin said. “Hopefully, we can find a way to solve them, keep this going and, you know, keep building off of the last few games for our team.”