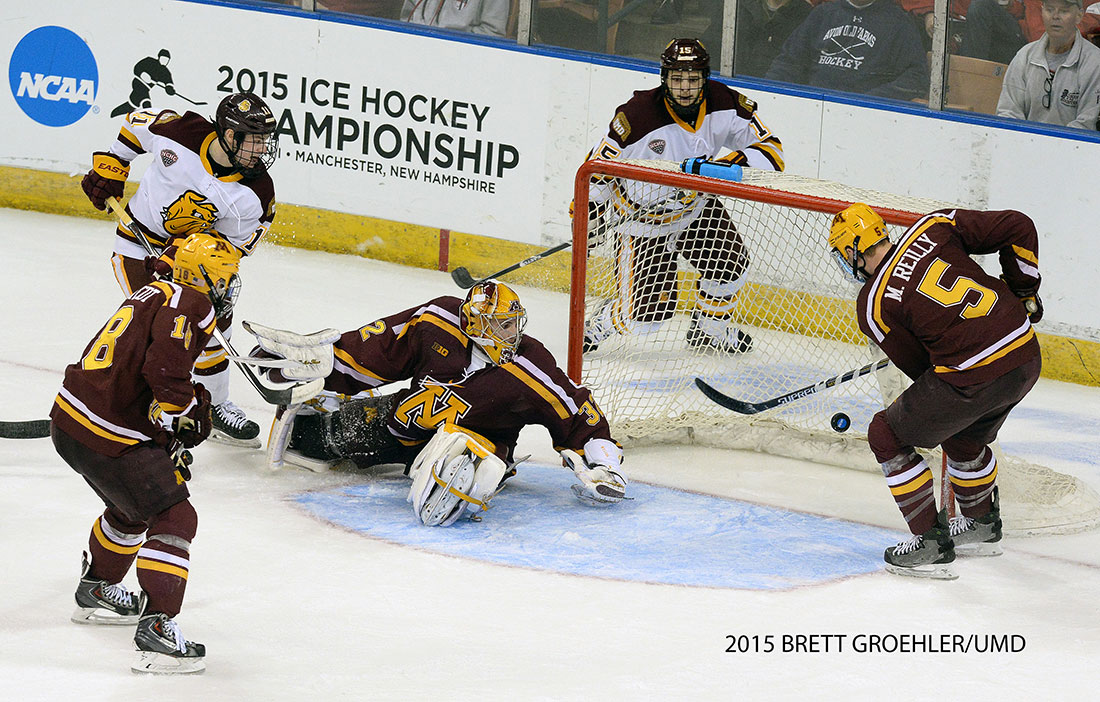 Minnesota-Duluth’s Willie Raskob (15) watches as his shot deflects off of Minnesota defenseman Mike Reilly and into the Gopher net in UMD’s 4-1 NCAA Northeast Regional semifinal win over the Gophers Friday night in Manchester, N.H. (Photo Courtesy of University of Minnesota-Duluth Athletics / Brett Groehler)

The Bulldogs (21-15-3) were the second NCHC at-large team advancing Friday, as St. Cloud State also won its first round game. Minnesota (23-12-3) entered the season as a favorite to make an NCAA run, but the lone Big Ten representative faced a battle to even make the field and then struggled to generate anything against a team that had beaten them in three of their previous four meetings this season.

“It’s really important against any team, but certainly our success against Minnesota in the four wins we’ve scored the first goal and I think we built off that tonight,” said Minnesota Duluth coach Scott Sandelin. “I liked our game a lot tonight. Obviously we’ve got to find a way to do that tomorrow, or better.”

“I think our forwards did a great job keeping pressure above their forwards and causing a lot of turnovers,” said Raskob. “I think all year our D has done a good job of jumping up in the play when we can. And tonight pucks went in for us.”

The Gophers were unable to generate many scoring chances and when they did NCHC All-Rookie goaltender Kasimir Kaskisuo was there to stop them. Minnesota coach Don Lucia highlighted the Finnish goalie as difference maker going into the series and Kaskisuo delivered by making made 31 saves on the night including 16 in the final period.

“For whatever reason, some of their match-ups, which they controlled the last three games, they were able to basically play every match-up tonight,” Minnesota coach Don Lucia said. “The goaltender made some saves, important saves when they needed them early and then we were chasing the scoreboard.

“They’re a good team …there’s a reason why they were the number two seed and number six in the pairwise when the season ended.”

The Bulldogs started controlling play just before the second media timeout and carried that pressure into the second half of the period and through the game. The sustained pressure paid off for Minnesota Duluth 12:49 into the first period. Raskob cycled in from the point to maintain puck possession and drove to the net. As the defense drew toward the puck, he dished it across the top of the crease to Tony Cameranesi for an easy back door goal, his ninth of the season.

Minnesota Duluth added to their lead 15:27 into first when Justin Crandall redirected Kotyk’s point shot past Adam Wilcox for his 13th goal of the season. Raskob then took advantage of a slow Gopher line change late in the period to get in transition. The sophomore defensemen let loose a shot fooling Wilcox, and leaving a loose puck on top of the crease. Austin Farley drove the net, occupying the Gopher defense, and leaving a second opportunity for Raskob. The shot went off Minnesota defenseman Mike Reilly’s stick and then his skate to hop into the net at 18:48 for Raskob’s third goal of the season.

Minnesota-Duluth extended its lead to four goals 11:02 into the second period on Soucy’s sixth goal of the year. The defenseman took a pass from Dominic Toniato atop the power play, and his one-timer deflected off Kyle Rau and then Brady Skjei to find the back of the net.

The Gophers finally got on the board 15:06 into the third period. Seth Ambroz jumped on a rare rebound opportunity allowed by Kaskisuo to score his 12th goal of the season.

“I think, especially in the state of Minnesota, we are one of those teams that everyone wants to beat and everyone brings their A-game. They just had our number this year,” said Ambroz. “But good for them and we wish them the best of luck.”

Minnesota exits the season after its nation-leading 36th NCAA tournament appearance. Minnesota Duluth advances in their eighth NCAA tournament appearance and draws Boston University in the regional championship after the Terriers defeated Yale University 3-2 in overtime. The regional final will be televised by ESPN2 on Saturday, March 28 at 4:30 p.m. CT.