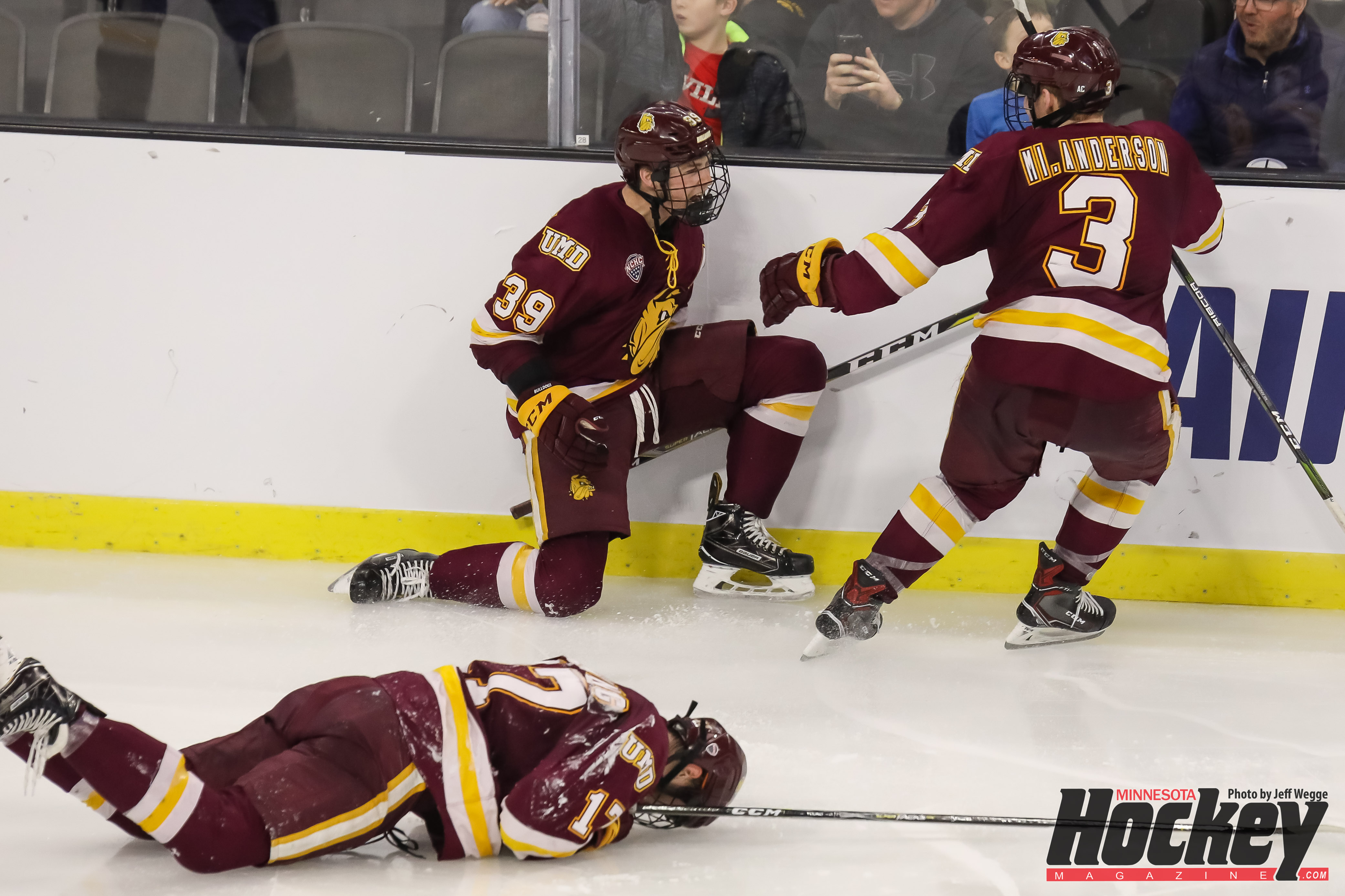 SIOUX FALLS, S.D. — After seven minutes, it looked like Minnesota State was on its way to a history-making night, but by game’s end, Minnesota-Duluth made sure history repeated itself.

The Bulldogs are back in the region final for a second year in a row after a 3-2 overtime win in the West Regional Friday night at the Denny Sanford Premier Center in Sioux Falls.

Parker Mackay scored on a wrist shot from the slot 2:28 into OT to make UMD 9-0 all-time in the first-round games while the Mavericks are still looking for their first NCAA Tournament win in program history.

“We were feeling pretty confident after the third period,” Mackay said. “We didn’t want to get too complacent.” 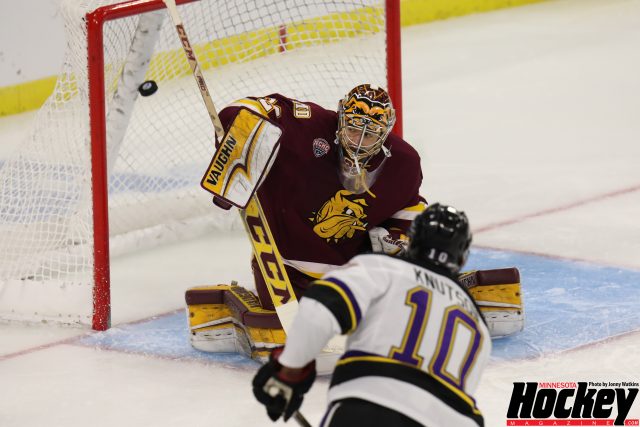 The Mavericks scored two quick goals before the seven-minute mark of the first period by Zeb Knutson and Ian Scheid and UMD was punchless out of the gate with just one shot on goal by the time MSU was up 2-0.

“We had a good start,” Knutson said. “Everyone was dialed in and excited for the game.”

Then the Mavericks offense went dormant. No registered shots on goal for roughly 35 minutes, including the entire second period and no goals the rest of the game.

“We’ve played them three times and neither team’s gotten out to tremendous leads,” MSU coach Mike Hastings said. “I thought we survived the second period.”

UMD began the long road back with an 8-0 shots on goal advantage in the second period, highlighted by Karson Kuhlman’s goal at the 6:38 mark.

“We got the jitters out in the first period and just stuck with it,” UMD’s Nick Swaney said.

MSU made an effort to regroup during the second intermission and get back on the offensive and rebuild its lead. Knutson and Connor Mackey each connected with posts, but that was it.

“We got back in the locker room and we all came together as a team and said ‘hey, we can do this,’” MSU forward and Hobey Baker Award semifinalist C.J. Suess said. “I felt like after coming out of the locker room our spirits were up and that we were ready to go in the third.”

Nick Swaney’s one-timer shot from the low left circle got past Connor LaCouvee with 4:08 left in the third period to send the game to overtime.

It didn’t take long for the back-and-forth overtime fireworks to blast. 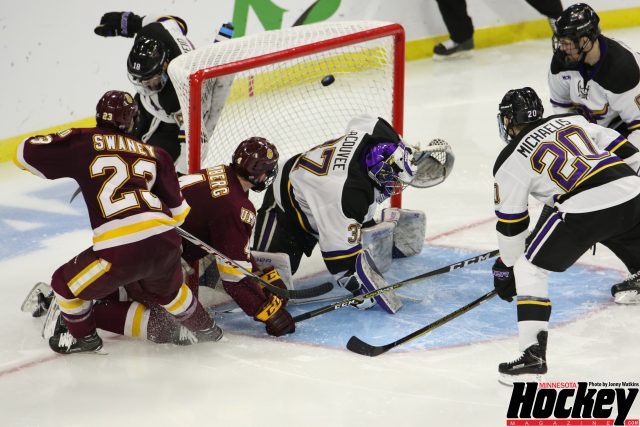 Players watch as UMD’s Nick Swaney (23) scored what was thought to be the game winner 55 seconds into overtime before the goal was reversed after review due t goaltender interference. (MHM Photo / Jonny Watkins)

UMD’s players jumped over the boards and rushed across the ice to mob Swaney who had just put the puck in the net for the Bulldogs 55 seconds into OT.

“We just called upstairs and asked our guy to take a look at it and we thought there was contact prior to the puck going in,” Hastings said. “I had a pretty good idea it was going to be overturned.”

The video replay showed Dylan Samberg running LaCouvee over in the crease and preventing the MSU goalie from making the stop on Swaney’s rebound shot.

A good goal was the call on the ice, but called off after review.

“I thought the guys did a good job refocusing and going back out there,” UMD coach Scott Sandelin said. “I think all my excitement went out with the (disallowed) goal. I was still excited for second goal but not as excited as the first one.

UMD goaltender Hunter Shepard experienced a flurry in front of his own net after the ensuing faceoff. The puck slid toward the net on a Nick Rivera shot amid the scrum, but MSU’s Brad McClure was knocked into the goal and his breezers prevented the puck from crossing the goal line.

Shepard finished with 19 saves and LaCouvee had 19 for MSU.

Back on the other end, after a defensive-zone turnover, Justin Richards found Mackay gliding down the slot and hit him with a pass. Mackay took a second, head faked and put the puck over LaCouvee’s shoulder.

“They had been blocking shots all game so I was just trying to maybe fake it out and see if there was a shot lane,” Mackay said. “Sure enough, I just tried to get the puck on net and it went in.”