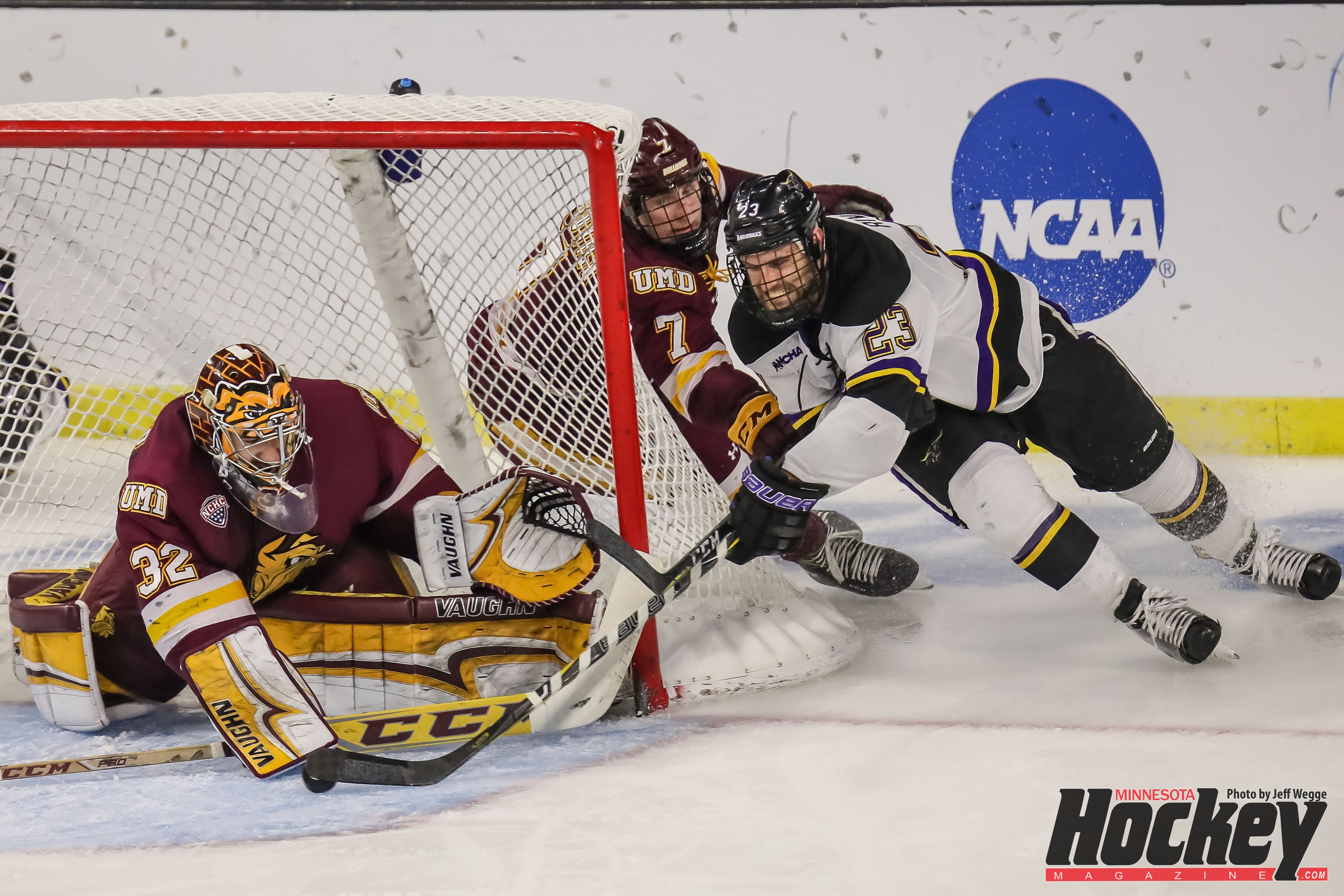 When hockey fans see Carson Soucy step into the Minnesota Wild lineup to play his first NHL game as a replacement for Ryan Suter, they have to be impressed with the 6-foot-5 rookie defenseman. Same with Neal Pionk, when he moved seamlessly into the New York Rangers lineup halfway through the season.

Similarly, seeing Alex Iafallo spend the entire season as a solid winger for the Los Angeles Kings, or Dominic Toninato hustling his way into the Colorado Avalanche lineup, creates cumulative evidence about the talent that powered last season’s UMD Bulldogs into the Frozen Four. Though they lost a 3-2 overtime game to Denver in the NCAA final at Chicago, the Bulldogs got there because of a talented forward group and an exceptional corps of defensemen.

However, that also creates the larger question: How did this year’s UMD team make it back without all those standouts? The Bulldogs lost their senior leaders, including their three top scoring forwards, as well as five senior defensemen, compounded by the summertime underage signings by captain-to-be Adam Johnson, defensive standout Pionk, as well as freshman goaltending star Hunter Miska.

“Just wait until you see these freshmen,” said Larson, a former Duluth Denfeld and UMD defenseman who returned to the UMD staff after venturing off to gain experience as a USHL coach and as assistant to old recruiting partner Steve Rohlik at Ohio State. He said it with a slight grin, and you learn quickly to never question Larson.

Sure enough, sophomore Nick Wolff was joined by freshman defensemen Scott Perunovich, Mikey Anderson, Dylan Samberg, Matt Anderson, and Louis Roehl — all homegrown Minnesota high school players — and the defense never missed a beat. Hunter Shepard, former Grand Rapids star who competed and narrowly lost out to Miska in goal last season, went through the same early-season competition but won it this time, and has been superb, a fact Sandelin attributes to the quiet work of former UMD goaltender and now goalie coach Brant Nicklin.

Freshmen wings Nick Swaney from Lakeville, Kobe Roth from Warroad, and center Justin Richards, who is listed from Columbus, Ohio, because that’s where his dad, former Wild coach and Gopher defenseman Todd Richards, formerly coached, but without question, the most astounding thing about this edition of the Bulldogs is the defense. And that 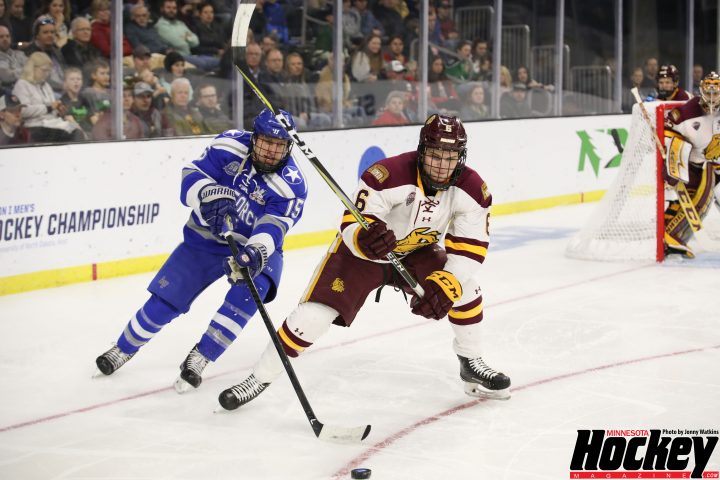 goes for the coaching staff, responsible for the intriguing development of the freshmen.

What goes mostly unnoticed by casual observers is that rarely does the UMD defense come out from behind their net and chip the puck up off the sideboard glass to clear the zone. Just as unnoticed is how prevalent such defensive zone play is. Virtually all NHL teams, college teams, and high school teams have short-fuse switches to panic mode and send pucks ricocheting off the glass or sideboards to get it past the opposing point-men and out to center ice. Of course, that leads to a lot more icings at one end of the spectrum, and loss of possession at the other end.

Sandelin and his staff stress a puck-control game, and it starts when the defensemen get the puck.

“Back in our end, they don’t panic,” said Sandelin. “They’re patient, and they’re always looking to make a play — sometimes to our own demise. Sometimes you just have to get the puck out across the blue line, and sometimes our guys think that if they can’t make a tape-to-tape pass, it’s not a good play.

“It’s all in the recognition. Under pressure, sometimes what you want to do isn’t the best play. But look at our guys on D. We made some mistakes, but you’re always going to have that. I think our D has been pretty good all year. They’ve stepped in and played some really good hockey. For all of them to play as well as they have all season is a big reason we’ve had the success we’ve had.”

On nearly every college coaching staff, the assistants have a defensive specialist and a forward specialist, but not UMD. While Larson played at UMD, Sandelin and Herter were elite defensemen at North Dakota who went on and played some pro hockey. When Sandelin got the UMD job, he added Larson and, for a while, OSU coach Rohlik, and former North Dakota sniper Lee Davidson, and later former UMD and NHL star Derek Plante. All of them were standout forwards as players, but as things evolved, and Larson returned from Columbus to be closer to his young family, the UMD staff wound up with three defensemen providing three voices, but singing in harmony.

“We all see the game a little differently,” said Larson. “And we all offer suggestions all the time. It’s not like most teams, where one defensive coach is the only voice the defensemen hear; with us the guys get a slightly different explanation, delivering the same message. So maybe something from one of us clicks.”

Larson also has a simple philosophy for the sharp-passing breakouts rather than the simpler off-the-wall escapes. “We want to possess the puck if we can,” Larson said. “We want getting rid of the puck to be our last option, even though at times you have to do it, like late in a close game when you have to play zone-to-zone hockey.”

The trend in hockey to clear the zone in near-panic mode is a lot like dump and chase in the offensive end, which requires giving up the puck in hopes of maybe getting it back. Sandelin said, “I’m not a big guy for ‘Hope’ plays. There’s no shot-clock in hockey, but my feeling is if you possess the puck for even as little as 10-15 seconds, that means it’s 10-15 seconds the other team doesn’t have it. The longer we have the puck, the longer they don’t.”

The fact that five freshmen and a sophomore can play so effectively and consistently is a tribute to Sandelin and his staff. They decided early to be patient, and to let the young players play and maybe make mistakes while they gain game experience and work to eliminate the mistakes.

“We’ve played eight freshmen a lot of games,” Sandelin said. “And they’ve been fine. You can get away with some mistakes by a couple of young forwards, and they can be more costly by young defensemen. We don’t have a lot of right-handed defensemen, so I make all of them play the off-side.

“Early, I wasn’t happy with the way Nicky [Wolff] was playing, because I thought he was trying to do too much as a leader.” 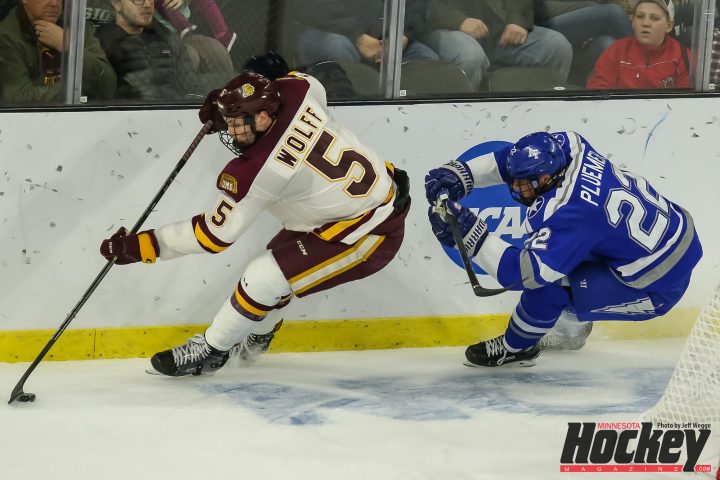 So Sandelin paired the hard-hitting 6-foot-4 sophomore Wolff with Perunovich, the mercurial freshman puck-rusher, whose defensive play has improved steadily, while his offense remains the team’s prized possession. Going into the Frozen Four, the elusive Perunovich is UMD’s leading scorer with 36 points, on 11 goals and 25 assists.

“If we give Perunovich some parameters, he could back off, but he wouldn’t be nearly as effective,” said Sandelin. “He’s responsible and wants to help out on defense, to the point where sometimes I have to get on him to take off more and join the rush.

“Matt Anderson has great skating ability, and Mikey Anderson is steady, and Dylan Samberg is a big, physical presence. Louie Roehl has improved all season, and we’ve got Wolffie, who has played well and it’s hard to realize he’s only a sophomore. We put Mikey and Dylan together and let them try things, just so we can see what works. It takes some time to see where everybody fits.”

Mikey Anderson and Matt Anderson are unrelated. Mikey is the freshman brother of sophomore winger Joey Anderson. “When we were little kids on the outdoor rinks in Roseville, we were always scrapping,” said Mikey. “If I’m a wing, he would be hitting me, and if he was a wing, I’d be hitting him. Either way, mom and dad weren’t happy at the end of the day.”

And now that they’re reunited, on a college team playing close to home at Xcel Energy Center in the Frozen Four, the whole family is happy.