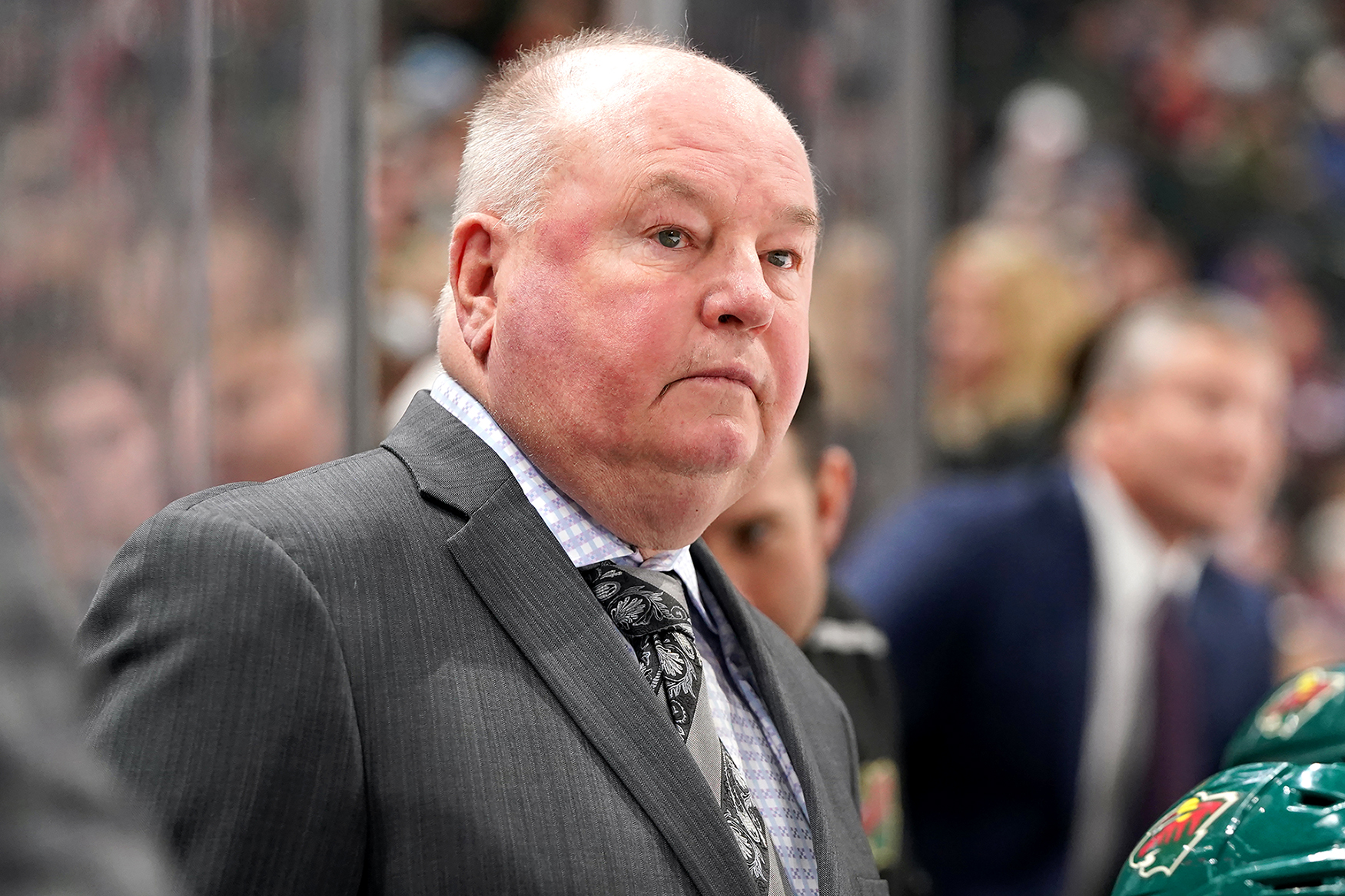 ST. PAUL – For the second time this week, Minnesota Wild general manager Bill Guerin made a significant move that changed up his team. He fired head coach Bruce Boudreau on Friday morning.

The big question of the day – why now?

“Listen, you’re never going to make everybody happy, and people are always going to question,” Guerin said. “I just feel like the timing is right to do it now. That’s just the way I felt.”

They’ll finish out the rest of the season with assistant coach Dean Evason moving into an interim head coach role, one that already started at the team’s Friday practice at TRIA Rink. The move comes the morning after the Wild blew a two-goal lead in the third period before losing 4-3 in a shootout to the New York Rangers. Overall, the Wild are 27-23-7 with 61 points, only three out of a playoff spot. 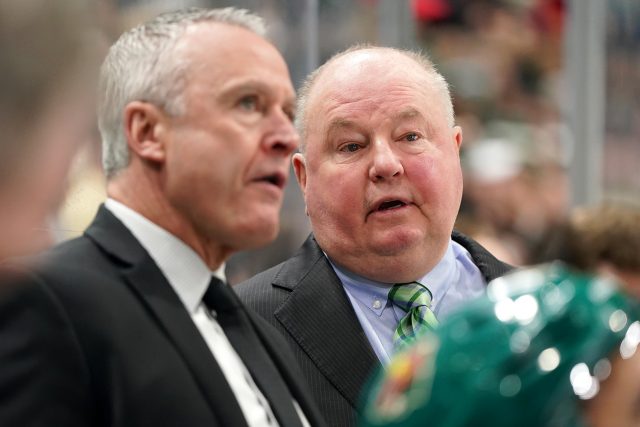 Dean Evason and Bruce Boudreau on the Wild bench during a January game against Vancouver. (MHM Photo / Rick Olson)

“The one thing I really do like about Dean is his passion, his fire for the game,” Guerin said. “I am hoping that that translates to the players. I think these guys really like Dean a lot.”

The Wild will conduct a full search for the next head coach at the end of the season, Guerin told the media on Friday at TRIA Rink, a couple of hours after news broke that Boudreau was relieved of his coaching duties. Evason’s name will be part of the overall search, Guerin said.

The timing of it all seemed to surprise a lot of people, including Evason and some Wild players. Evason called Friday a “very emotional morning for everybody.”

“You never know the timing of these things unless you’re on the inside, you don’t know what transpired to get to this point,” Evason said. “I can’t speculate on what happened, but certainly we were all very surprised.”

Defensemen Ryan Suter and Jared Spurgeon used the word “shock” to describe their reaction. Goaltender Alex Stalock called it a “wakeup call” and said he will “wear it myself now,” referencing blowing the two-goal lead in Thursday’s game.

“We were surprised,” said captain Mikko Koivu. “Didn’t expect that this morning when you come to the rink. That’s the biggest reaction for all of us.

“But I think it’s also a message that it’s not enough right now. We can get into the playoffs, and that’s why the change is made, but I think that’s also a pretty clear message to the players that now it’s up to us to get whatever changes Dean and his staff will have and do our job to play into that.”

Guerin briefly addressed the team prior to Friday’s practice. He let them know what’s expected of them and offered clarity on the situation. Like he mentioned earlier in the week when he traded fan-favorite Jason Zucker to Pittsburgh, Guerin said he expects his players to show up for the next game – a 4 p.m. contest hosting San Jose on Saturday – and that he expects a push toward the playoffs.

Professional sports are a business, and that’s a sentiment Guerin has brought up this week amid the personnel changes within the team. He addressed it again when asked about the player reactions to Boudreau’s firing.

Boudreau finishes his Wild tenure with a 158-110-35 record, leading them to the playoffs his first two seasons in Minnesota. This was his fourth season as the Wild’s head coach, and he was 16 games away from coaching his 1,000th game in the NHL. Guerin did not comment when asked about the conversation he had with Boudreau when he fired him.

“We have a lot of respect for Bruce,” Suter said. “He was a great guy and a great coach. It’s sad to see him go.”

Despite the coaching change, Guerin made it clear that the Wild players need to be better as well. There have been inconsistencies in the results this season, according to Guerin. The Wild have certainly been a mid-pack squad, rebounding from a 1-6 start to the season. The Wild were actually playing better recently, going 7-3-1 in their last 11 games, but there are things that still need to be better, according to Guerin.

“There has to be accountability, and people are going to be held accountable,” Guerin said. “Players are absolutely included in that first and foremost.”

Still, this move does not change the team’s push to make the playoffs, at least from Guerin’s perspective. He said he expects this team to compete for a playoff spot.

It will be up to the players to focus on that goal, with Evason helping along the way.

“I think they’re pretty honed in right now,” Evason said. “I think when something like this happens, it catches everyone’s attention. Hopefully, they all individually feel a bit responsible to what happened. We all should. We all should be motivated to go forward and try to do the right things to get to where we want to be.” 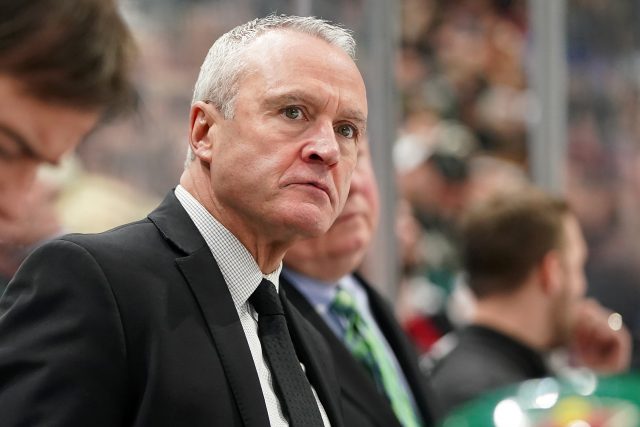 While the news might be shocking and unfortunate to see an established NHL coach like Boudreau be let go (the eighth one in the NHL this season), the move also creates an opportunity for Evason. His goal has always been to be a coach at the highest level, the NHL, he said Friday.

“Regardless of the situation and how you get here, this is something that I’ve strived for,” Evason said. “And I’ve got the opportunity, and I’m going to try to do it the way that I’ve learned how to be a head coach through so many different head coaches that I’ve had.”

Evason was hired as a Wild assistant coach in June 2018 under then-general manager Paul Fenton. Previously, he was the head coach for the Milwaukee Admirals in the AHL for six seasons. He scored 139 goals and 372 points in 803 NHL games across 13 seasons with Washington, Hartford Whalers, San Jose, Dallas and Calgary from 1983-96.

He said he’s going to try to lead as a head coach of the Wild while also relying on his coaching staff of Bob Woods, Darby Hendrickson (who will now move behind the bench full-time during games) and Bob Mason. He’ll look to draw on his past experiences as a player and coach to try and do the right things, Evason said.

“He’s developed great relationships with just about everybody in this room,” said goaltender Devan Dubnyk. “So that will be an easy transition that way and make it easier for us going forward.”

Evason also said he wants the group to be accountable and aggressive.