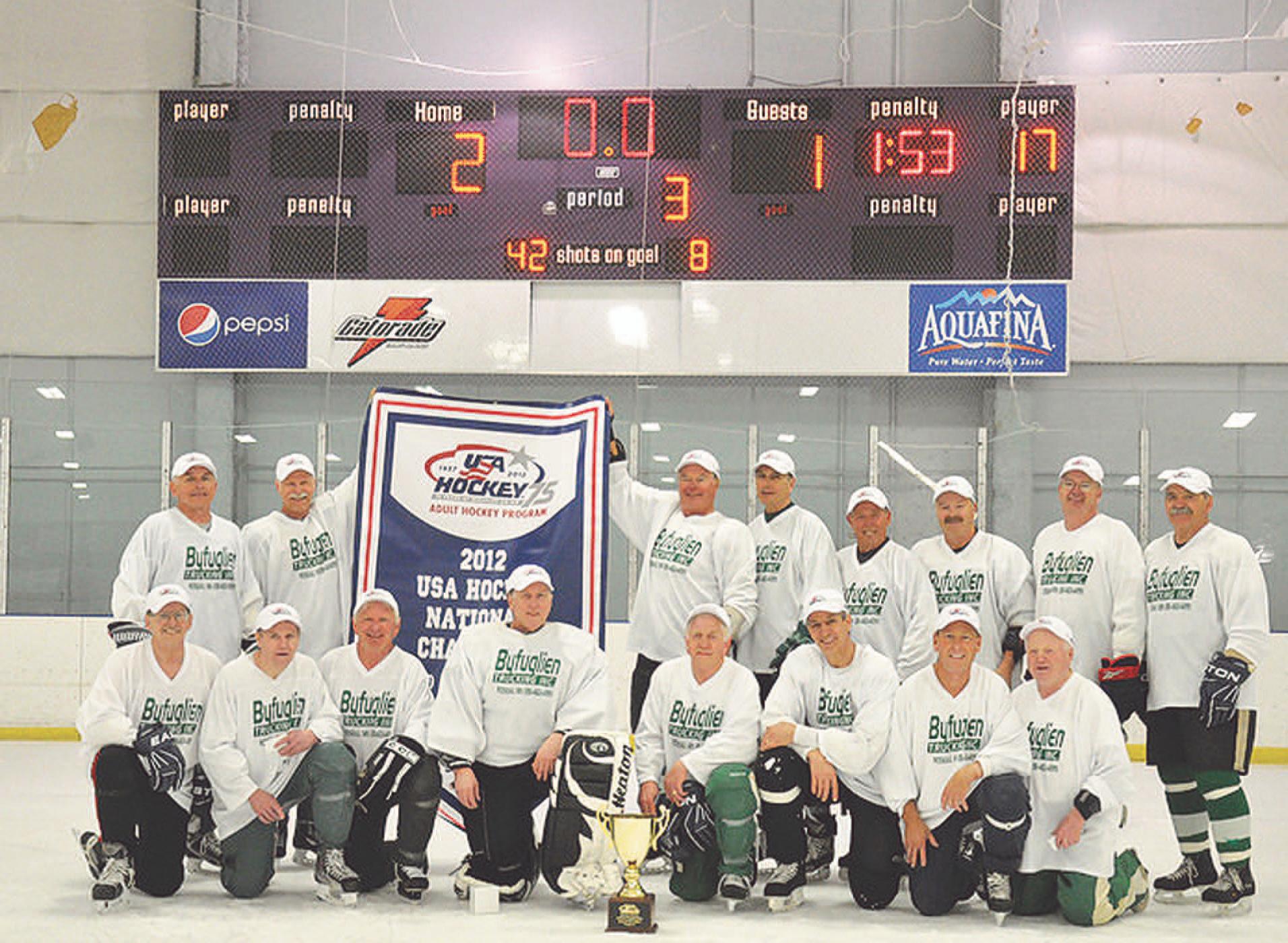 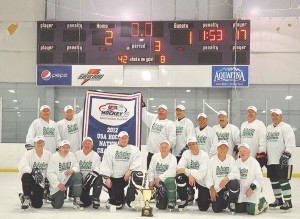 What a team of geriatric skaters! Gordie Howe would love them.

If you don’t know Mr. Howe, you’re too young to be reading this.

Take forward Bruce Gillie, who will be 74 next month.  Can he skate?  Does the sun rise in the east? Old Gillie played.  He had to when Dr. Bruce Falk, who fixes teeth for a living, needed the services of a chiropractor during the second game at the Ellenton Ice & Sports Complex near Tampa, Florida.  Falk, 63, ended up slamming into the boards.  “I either got checked or I fell,” he said, mentioning that he was out of action for a while and Gillie, who had been the gatekeeper, filled in nicely.

Here’s another thing about the 60 and over Byfuglien Trucking hockey team – the BTs – which might be disqualified someday because they keep winning national titles.  Roseau’s own Bobby Lund is the general manager/player coach and the closest thing to a George Steinbrenner.  He should consider picking up a hockey playing chiropractor.  “Hey, Doc, you want to crack his back.  He’s over there laying behind the bench.  ”On Monday, Lund looked like a million dollars.  He wasn’t hobbling or complaining. That comes with winning.  “I’m 71,” he said, and is still the kid to Gillie, who is 73.  This particular national tournament was probably the first time Lund went scoreless.  It didn’t matter.  His boys had won consecutive 2-1 decisions on Saturday and Sunday – the last one for all the marbles.  “A helluva game on Saturday against the Tampa Tropics,” he said.  “They pulled in some guys from Edmonton.” For the uninformed, Edmonton is in Alberta, which is in Canada, and these guys from Edmonton are known as ringers.  Meaning that they’re really good players like the dudes who consistently throw ringers in horseshoes.  “The Tampa Tropics were a really good team, very physical, and mostly Canadians,” he said.  “They winter in Florida.”

Not that Bobby Lund showed up with a bunch of stiffs.  He’s always scouting for talented players, mostly from this area.  But not always.  Take the goalie, Kim Newman, 63, who is from the Twin Cities and throws up an iron curtain when he’s in the net.  He’s very solid.  But the first two games against the New York Olde Crabs and the Virginia Gerihatricks were blowouts, 8-1 and 9-4 respectively on Thursday and Friday.  From that point on, what Mr. Newman did in the nets was nothing short of sensational.  Player coach Lund couldn’t say enough about his netminder, who played for the Air Force Academy and was on the 1972 U.S. Olympic hockey team.  “He made key saves, big saves, in the final two games,” he said.  “He secured his spot on the team.”  This was Bobby’s way of introducing Kim Newman as the number one star for Byfuglien Trucking’s fourth straight 60 and over national championship.  “He really stood on his head to stop the shots,” he said. 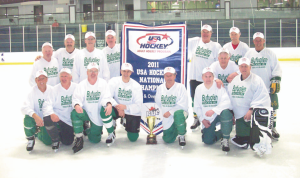 Not that there wasn’t competition for that first star.  Ryan Brandt had two hat tricks in the first two games while Mike Lundbohm scored a goal in three of the four games.  Get General Manager Lund talking about the first game on Thursday, and he had the goal scorers down pat.  “Besides Ryan’s three goals, Mike Lundbohm scored twice and Bill Rossini, Huffer Christianson and Bryan Grand each scored a goal.  The 9-4 rout on Friday against the Virginia Gerihatricks saw Brandt with the hat trick, followed by Lundbohm, Jim Jaros, Bill Rossini, Huffer Christianson, Steve Arndt, and Larry Stordahl scoring a goal apiece.

And then the drought began on Saturday as the BT boys scored just twice – Huffer Christianson with the tying goal in the second period and Bryan Grand with the winning goal in the third period.  On Sunday, the BTs might have expected a cakewalk against the Gerihatricks, whom they’d thumped in the second game.  But not this time.  Mike Lundbohm came up big with the tying goal and then it was hang onto your hats.  The BT boys didn’t nail down the title until midway through the third period when John McNamara notched the winning goal.

Believe it.  The old boys celebrated their fourth straight national championship.  But not like the New York Yankees of the 1950s when they sprayed champagne on each other.  Oh, the BT Boys didn’t waste a drop.  “The beer tastes better after a win,” said Bruce Falk, who rebounded to play the third and fourth games.  Of course, he behaved.  His wife was there with him.  So were many of the other players’ wives.  “They’re our cheerleaders,” he said.  “They might be our third stars of the tourney.”

Only Bobby Lund can mix business with sports.  “I had to make a service call to Venice, Florida, during the tournament,” he said, recalling that former Roseau area resident Todd Michal had called a couple of weeks before mentioning that his mattress had some problems.  “I was going to Florida and told Todd to keep calling to remind me,” said Lund.  Sure enough, Bobby made a service call to the Michal residence, which was only 10 miles out of the way off I-75.  A week ago, Bobby and John Mc-Namara showed up to check out the mattress.   “I thought it was funny,” said Mr. Michal impressed with the long-distance service call from Roseau.  “He had McNamara take a picture of the mattress,” said Michal. Earlier this week, Lund said he was going to get a sales rep to check out the mattress.  “How’s that for service?” he said.

On Monday, Bobby Lund had Star #2 all figured out.  “It’s Byfuglien Trucking for sponsoring us,” he said, mentioning that the Byfuglien boys, Dana and Dean, pay the $1,000 entry fee.  “That’s nice of them,” he said.  Bobby is already looking ahead to next spring and shooting for their next national title. He and Bruce Gillie could be the gatekeepers by then.  In hockey jargon, the gatekeeper is the guy who opens the door so the players don’t have to leap over the boards and fall on the ice.  Don’t count Lund or Gillie out.  They both played solidly at this tourney.  Bruce Falk put it all in perspective about their winning streak.  “We’ll have to keep her going until we lose,” he said.  “I don’t care if we win or lose as long as we win.”