The Godfather of Warroad hockey 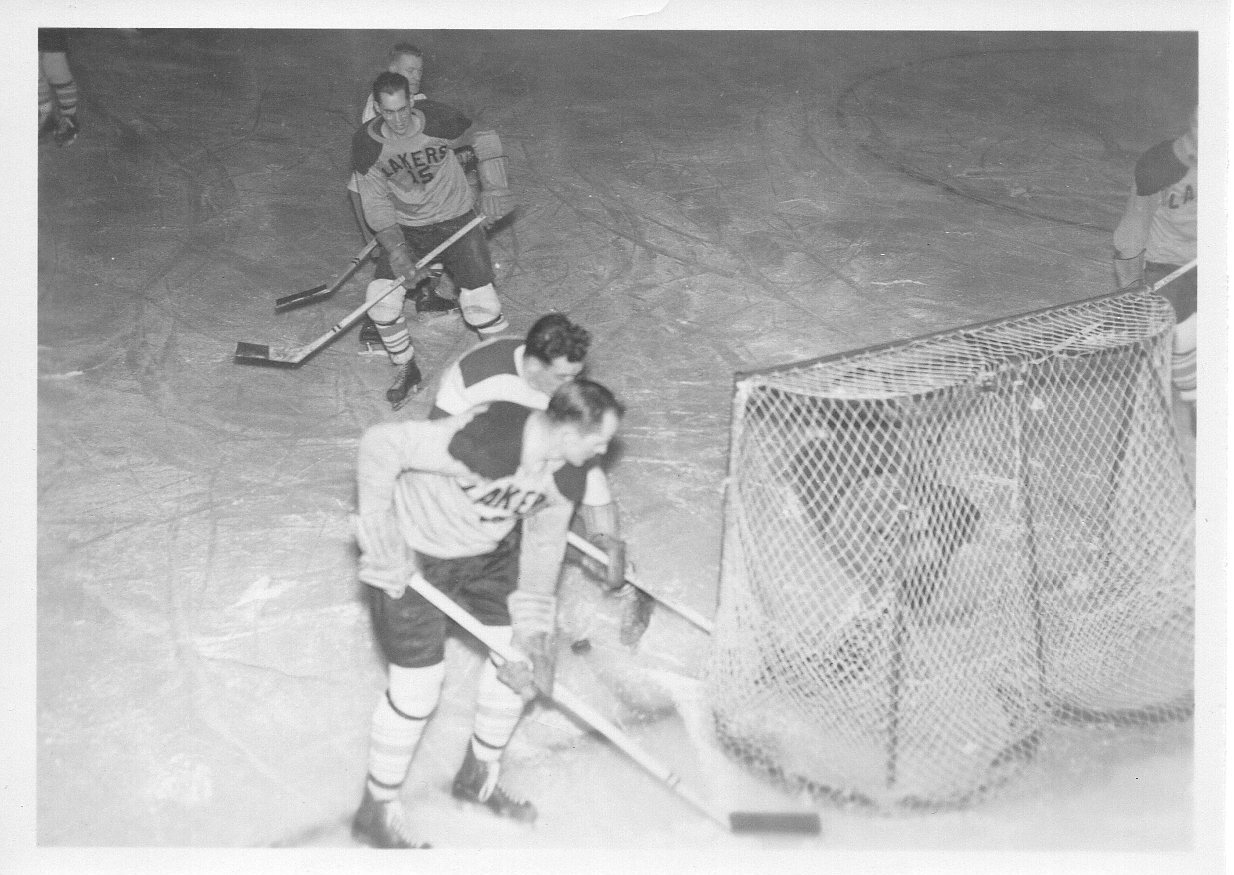 Warroad is HOCKEYTOWN USA because of Cal Marvin.  Cal Marvin and his Warroad Lakers Senior Men’s Hockey Club were the cornerstone of modern day hockey in Warroad.  Cal was the guy who made it all happen.

Cal Marvin was born August 29, 1924, the youngest of the five boys and second youngest child of George and Almina Marvin.  George Marvin had arrived in Warroad from Canada, after learning the grain business, and came to manage the Canadian Grain Company’s elevator, lumber and fuel interests.  When the expected shipping center didn’t materialize, Marvin stayed and bought a lumber business. Through many innovations this is now a highly successful business, known as Marvin Windows, which now employs over 5,000 people worldwide.

While his three brothers Bill, Jack, and Tut worked to build the Marvin Company, Cal took a different route. 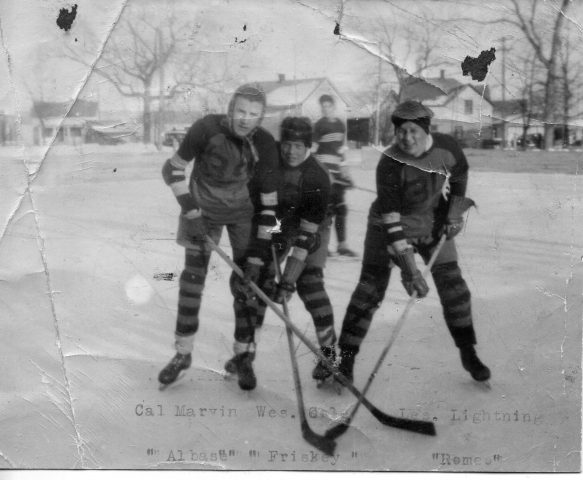 In the movie, “It’s a Wonderful Life,” George Bailey is given the opportunity to see what would have happened if he was not around in his local community. Similarly, Warroad certainly would not be the same without Cal.

Dick Roberts, who grew up just a few houses from Cal, knew him well.  “Cal Marvin was full of energy, a go to guy, full of ideas; his mind was always working and for his whole life Cal would get things done.  He didn’t like to take no for an answer.”

Cal enjoyed his youth and loved sports. After graduating from Warroad High, Cal went off to Carleton College where he soon discovered that college was not his calling.

With the war in full force, he felt led to join the Marine Corps and went off to San Diego for training.  He then served in the South Pacific fighting against the Japanese in Saipan.  When the war ended, Cal came back to his hometown; where instead of going into the family business he became a successful businessman in the resort and hospitality industry.  This gave him time in the winter, and soon Cal became a fixture in the Warroad hockey fabric.

When Cal came back from the war, he wanted to help the community as it had no rink.  The Warroad Pioneer reported on March 8, 1945 that, “Marine Private Cal Marvin revived the sport here this winter while home on furlough from active duty in the South Pacific.”

Cal and a few helpers flooded a rink on the schoolyard, and with the rink now in place, and Max Oshie as a star player, he was able to start up the Warroad High School team. 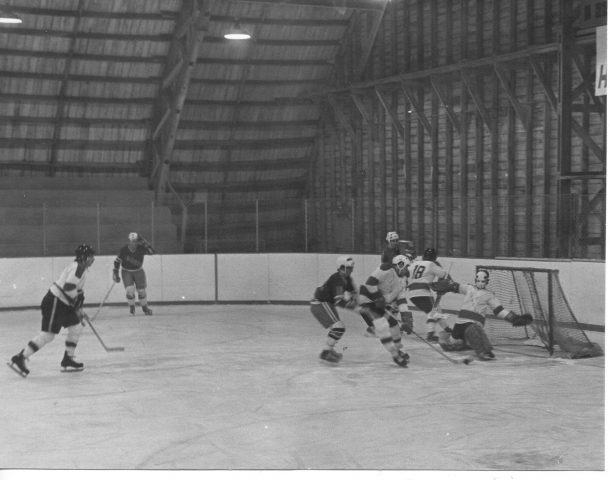 In Cal’s mind, what Warroad needed more than anything else, was a place to play hockey indoors.  Dead or alive, he was committed to seeing this through.  While serving in WWII, his love for the game was off the charts, and if he had not made it back from the war, he had named the Warroad Arena Fund as the beneficiary of his $10,000 life insurance policy.

On the invitation list was 35 business owners from Warroad.  It was not an easy sell.  Warroad had few sidewalks, no library, and the roads were in poor shape.  Many in the community felt the ice arena was not where the funds should go.

Cal led the way for a fundraising effort to build the first indoor rink, his “Castle on the Corner.”  Cal was able to raise the funds through bingo nights, benefit auction sales, variety shows, raffles and other fundraisers, and by 1947, he had raised $9500.00 in the Warroad Arena fund.

Cal proved his critics wrong, as this money that was spent to create an arena was one of the seeds in the ground that put Warroad on the map, not just locally and in Canada, but throughout the hockey world.

With the support of the community, the blueprints from the University of North Dakota rink and a volunteer force ready to go, the plans for the arena were now in motion.  With local carpenter Ed Christian scaling back the plans, it was now time to get the building started.  Christian would later see his three boys Gordon, Roger and Bill play in this building, and in time all three would represent the USA as Olympians. 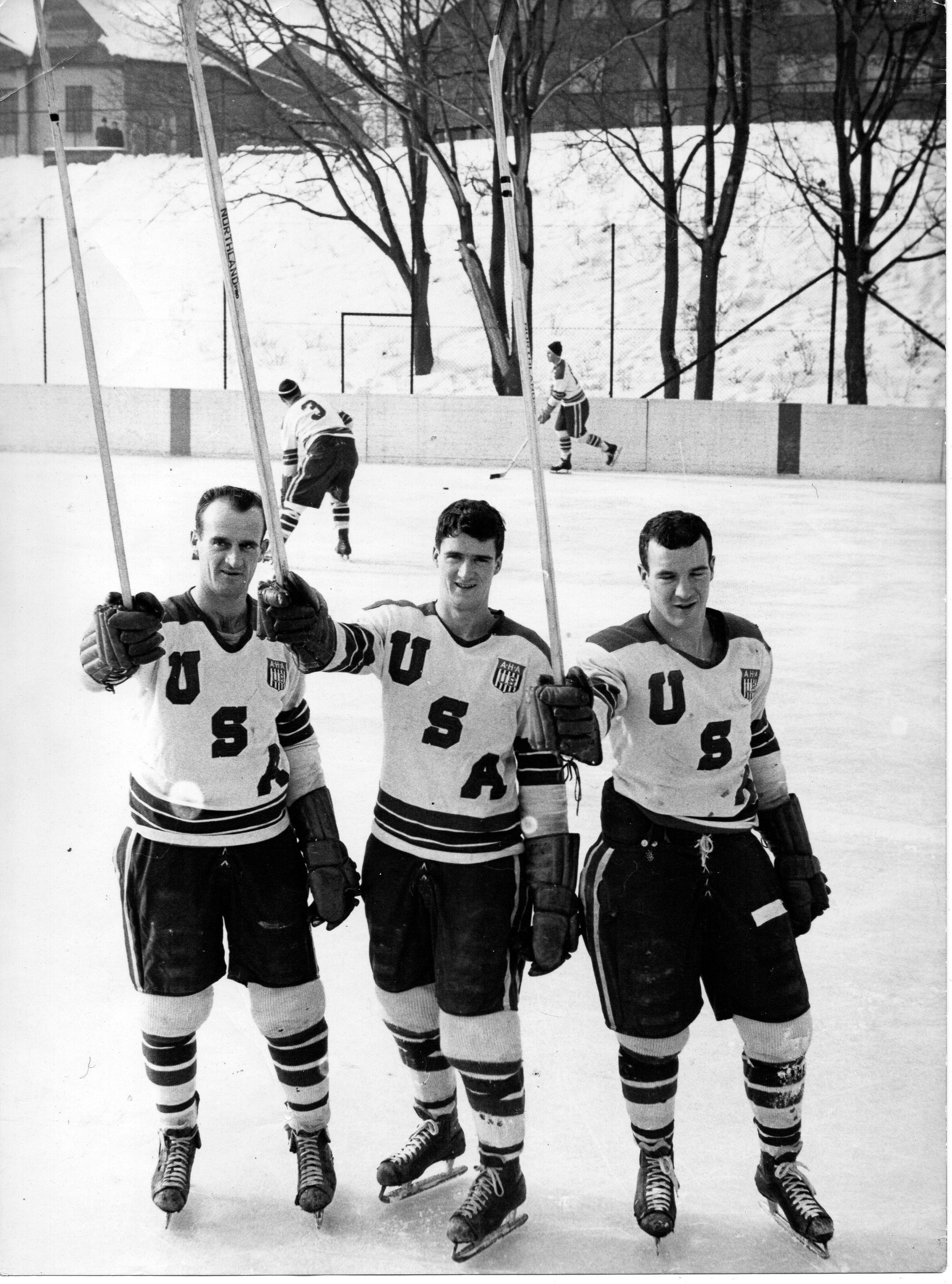 Ginny, Bill and Roger Christian all wearing the USA Jersey

Cal would miss only a short bit of the entire project, but he had a good excuse.  His marriage to Beth took place that summer.  He flew to his wedding and, after honeymooning for two days, returned to his project.  This lifestyle didn’t stop Cal and Beth from enjoying each other’s company, as winters are cold and long in Warroad, and they somehow managed to have 12 children.

With the arena built, it was now time to fill it up with hockey players, with practices and games for all ages. Mike Marvin saw firsthand his father’s devotion to the game.

“Dad wasn’t one of those who just loved hockey at the level that he was at, but he wished success for everyone, at every level,” Mike Marvin said. “That is evidenced by his 40-some years as president of our youth hockey organization; with all the countless meetings that he sat through.  Dad fought to build the arena and he fought to make the hockey programs successful.”

In the Beginning- the birth of the Warroad Laker hockey 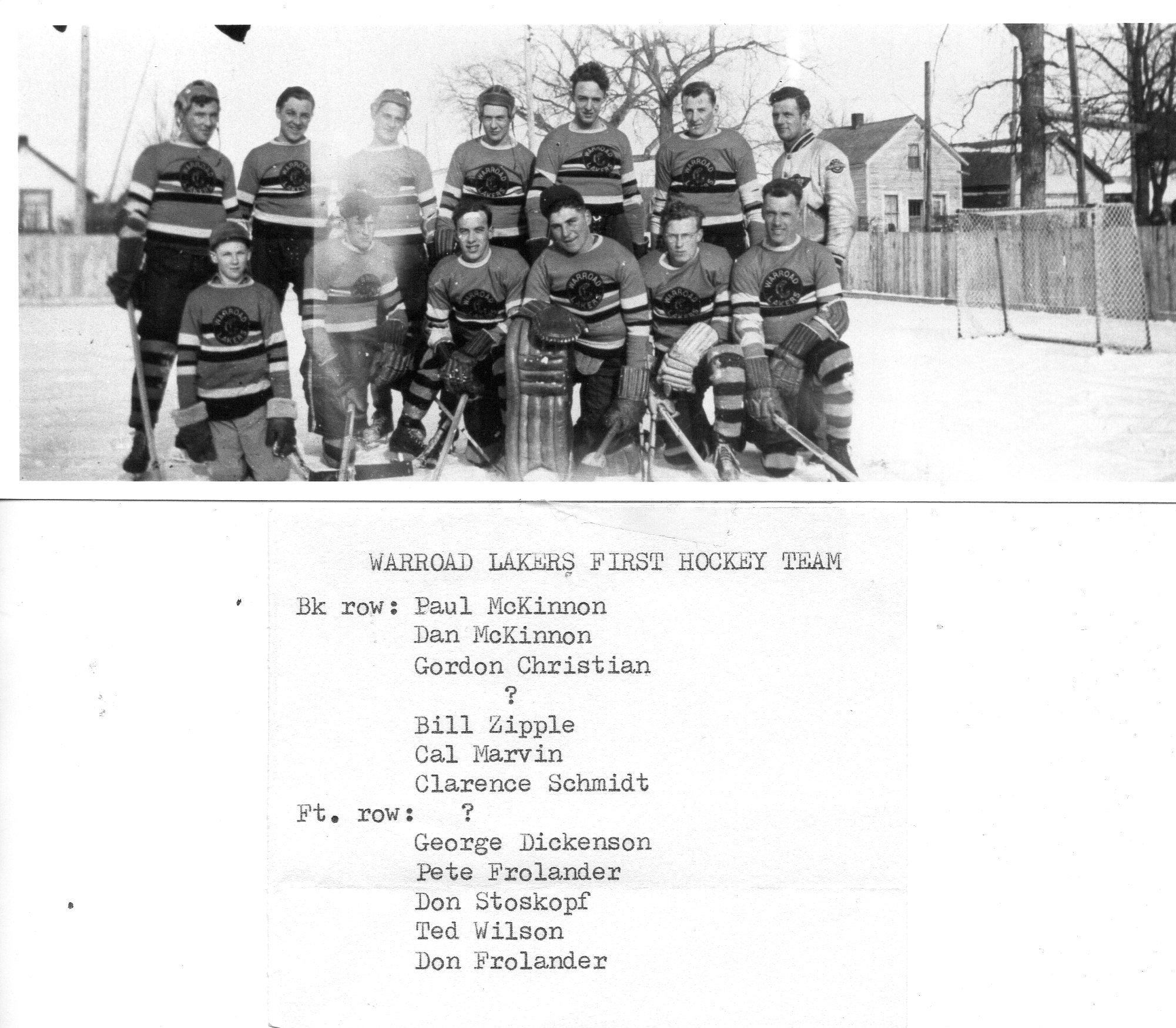 In the summer of 1946, Cal wanted to get a senior hockey team in Warroad.  In order to do so they needed to have uniforms.

“Cal and I planned a dance in a local seed house,” Roberts said. “The dance was very well attended by the people in town.  We raised $1300.00 that night which at that time, was a lot of money for the complete uniforms”.

With uniforms now in hand from the fundraising dance in the summer of ‘46 by Cal and Roberts, it was time to organize.

The Warroad Lakers Hockey Club started in 1946 -1947 when Warroad pharmacist E.J. Holland called a meeting to organize a men’s team that would play in the States-Dominion League against teams from Northwest Minnesota, including teams from Hallock, Crookston, Roseau and Thief River Falls.

Led by Cal Marvin, this group of hockey players from Warroad would take their game to Grand Forks and started the University of North Dakota program.

The Birth of UND Varsity Hockey

The following year, with Cal Marvin leading the charge, they would bring the University of North Dakota varsity program to life.  Marvin felt strongly he could make a solid college team and asked Red Jarrett, the UND Athletic Director, to give them a chance to bring players into the University of North Dakota and start a varsity program.  Marvin followed through, getting the players and, with the help of Jarrett scheduling games, started the varsity hockey program at UND.

In the first year as a UND varsity team, they traveled by train out to play mighty Michigan, defeating them in front of few fans by a 6-5 score.  The Wolverines would rebound the next night, and in front of a full house, beat UND sending them back for the long train ride home.

When the team arrived back in Grand Forks, at 7:30 a.m., in well below zero weather, they were greeted by Jarret and the university band, after becoming the first UND sports team to ever beat a Big 10 team in any sport.

With a limited college schedule, the players would often head home for the weekend to play for the Lakers, against the local competition from around the Northwest.

Cal Marvin and the Lakers

The Warroad Lakers may have been the greatest amateur club to ever play the game of hockey.  The Lakers dominated the sport.  Showcasing talent with speed, skill and toughness, the Lakers would beat national and Olympic teams.

The Lakers didn’t start hockey in Warroad, but hockey in Warroad would not be the same without them.   The club has not played a game in 20 years, but it is during the 50 years they played that Warroad became known as HOCKEYTOWN USA.

Cal Marvin’s name was synonymous with the Warroad Lakers.  As the leader of the Lakers, Cal was known for his ability to get the guys needed to be a winning team, and then manage their ice time.  In addition, for 50 years, he was loved by the guys who played for him.  They knew he cared and would do whatever he could to help them out.

This was not beer-league or no-check hockey.  This was intense, 60-minute stop time, full-contact hockey.  It was common to play with pain, and if you weren’t prepared to play, you would be leaving worse than you arrived.

How good was the Warroad Lakers Senior Men’s Hockey Club?

In 1960, the U.S. Olympic team traveled to Warroad, only to get beaten by the Lakers. This wasn’t the first time the Lakers beat a U.S. national squad. In 1958 they did it not once, but twice. 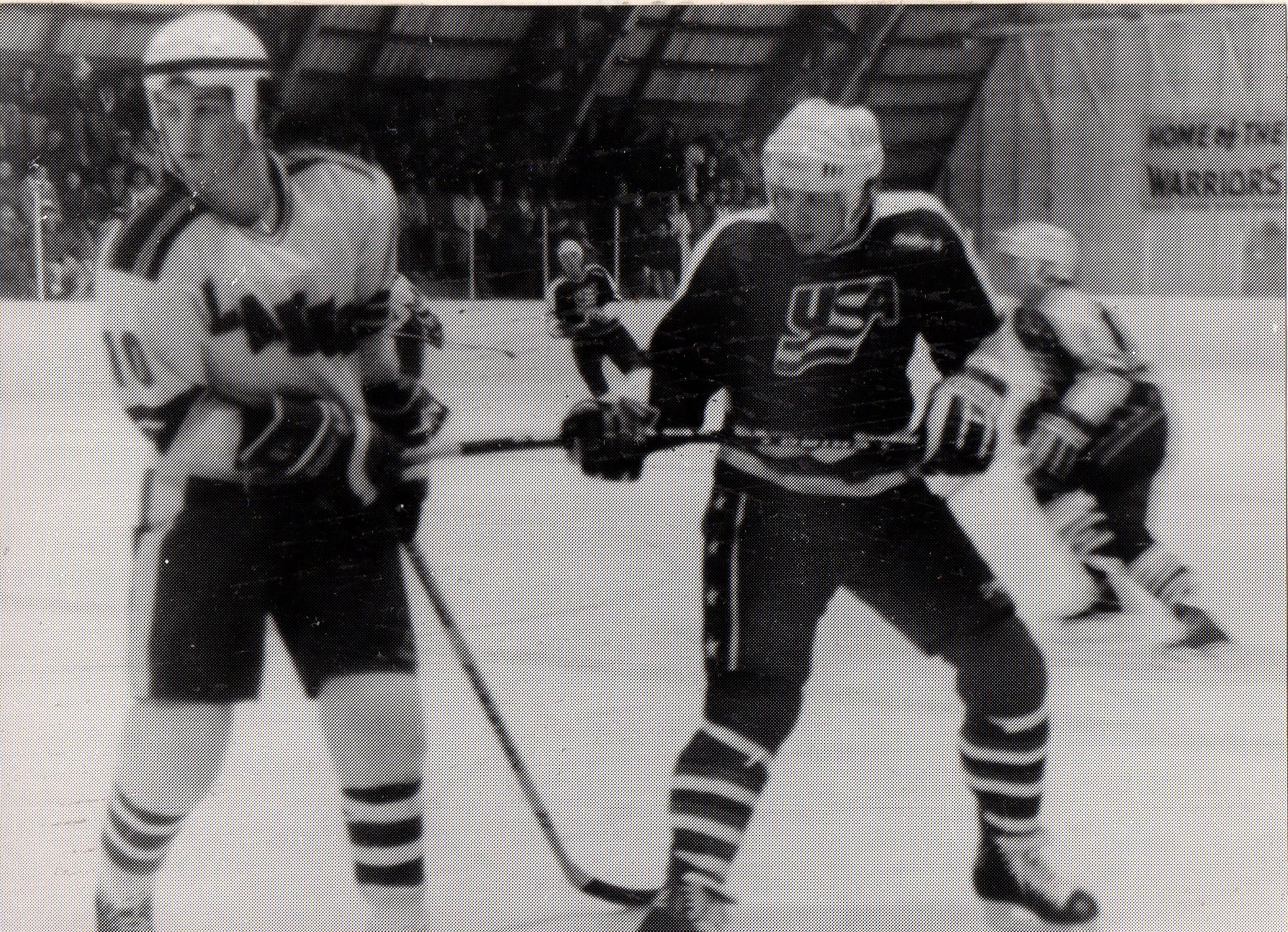 Later, that 1960 U.S. team would take the Olympic gold medal in Squaw Valley with Warroad players Roger and Billy Christian on it.

Not only did Bill and Roger Christian play on the first U.S. team to ever take the Olympic gold medal, but for many seasons, they also played for the Lakers. 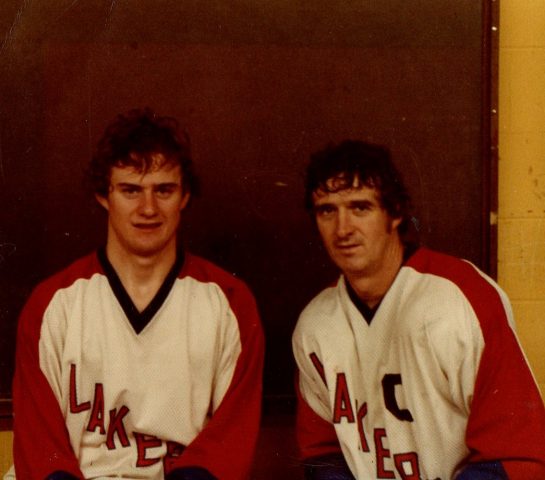 David and Bill Christian- played together as Lakers

Interestingly enough, the United States has never won a gold medal in the Olympics without a member of its team being from Warroad.

“One of the nicest testimonies about my dad Cal and the Lakers was something that Chris Imes said after he had played for the Olympic team and then came to Warroad and played for the Lakers in the playoffs,” Mike Marvin recalls. “Imes told Virg Foss, of the Grand Forks Herald, ‘You know Virg, I’ve been on a national championship college team and I’ve played in the Olympics, but I’ve never had so much fun as playing for Cal Marvin.’”

Mike recalls overhearing Billy Lund, who played professionally in Texas say “Cal, we’re getting paid and we’re playing, but it’s not like Laker hockey.  That was so much fun.’”

Five Lakers are now members of the United States Hockey Hall of Fame, including Cal Marvin, Bill Christian, Roger Christian, Henry Boucha and David Christian.  I know of no other amateur hockey club that can make these claims.

The largest challenges that Cal and the Lakers ran into were from being too successful.   Over the course of 50 years, the club played in many leagues, but soon wore out their welcome, as team owners refused to allow them in their league.

The Lakers saved the best for last.  With Cal’s son David as player-coach, the Lakers became the only senior team ever to win the treasured Allan Cup in a three-peat, winning the title back-to-back-to-back. In its final season, the team made it to the finals but a banged up squad came up short.

“There wasn’t anybody who wanted to win more than Cal…no one,” David Marvin recalled. “Yet, he could handle a loss.  He’d always be in your corner.”

John Hanson, who played on all three of the Allan Cup championship teams, said “Cal recruited guys that were extremely competitive.  We always wanted to win, practices or games, we played to win.”

The Lakers and Cal Marvin are no longer with us. Cal lived a wonderful life not only doing what he loved, but leaving Warroad with a rich, historic legacy that contributes to its HOCKEYTOWN USA fame. 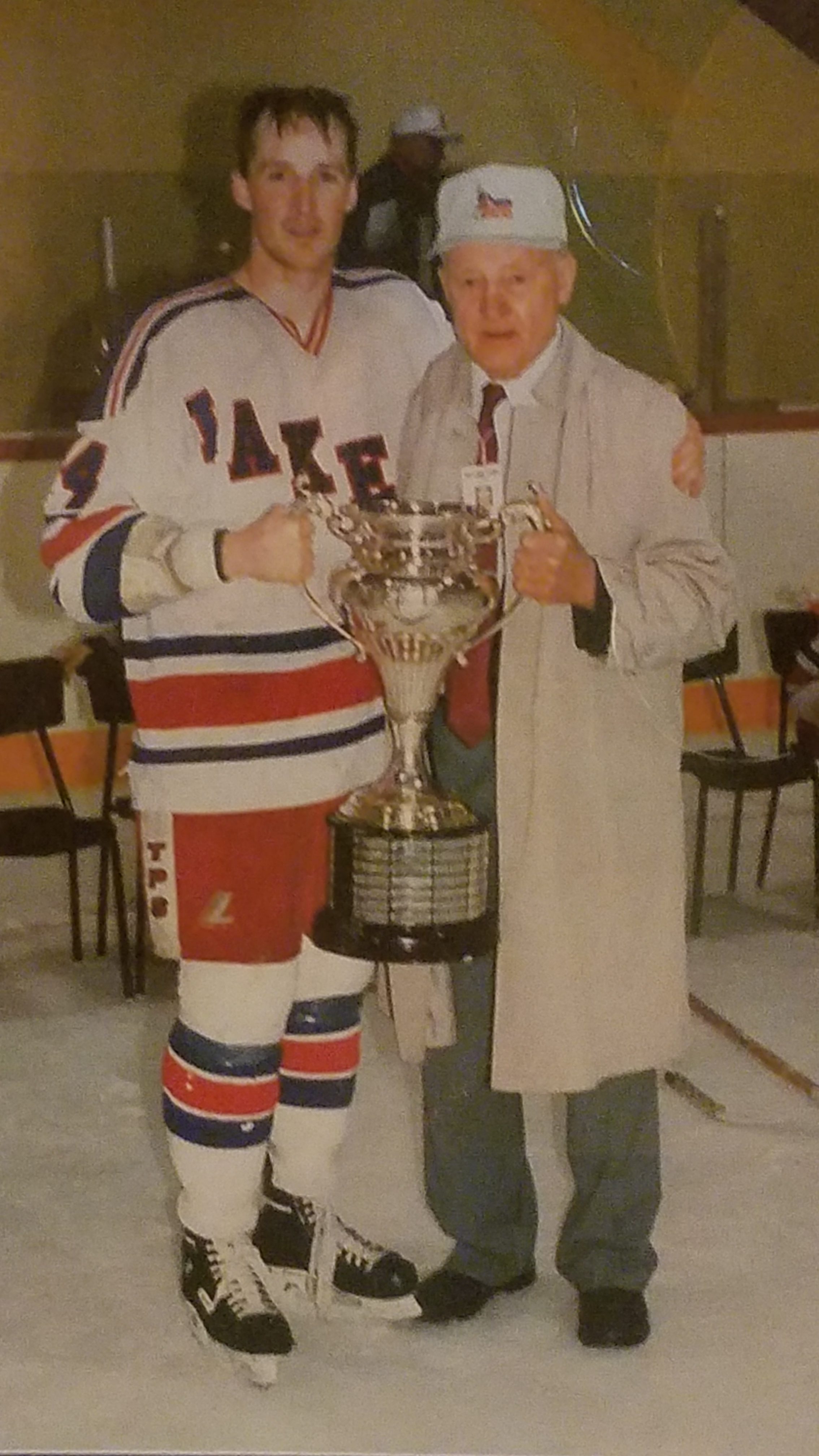