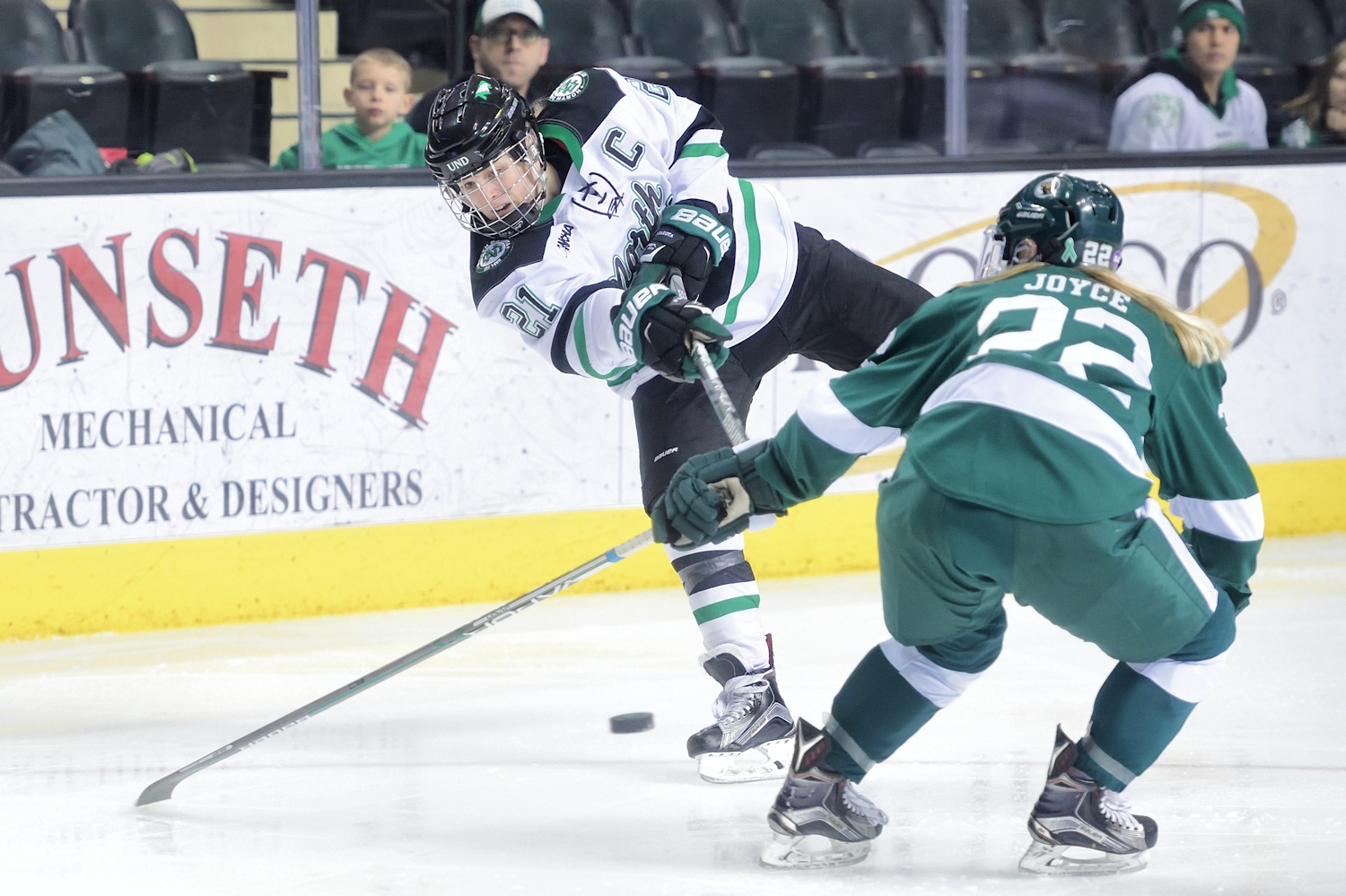 North Dakota senior and Shakopee native Amy Menke has had a trying season. On the one hand, she was named an alternate captain for her senior season and she’s continued to be an offensive leader. She is ushering in the team’s next generation in a year where the Fighting Hawks are fielding six freshmen forwards.

On the other hand, her production has lagged in her final season. She’s putting up 0.70 points per game after a junior year in which she posted 1.14 per game. Meanwhile, the Fighting Hawks, once lodged at the bottom of top-10 polls, have fallen off the national polls and had to go to overtime of game three against Ohio State in the opening round of the WCHA playoffs.

From the outside, it might be easy to misunderstand the season. North Dakota has had some struggles, but the box score doesn’t tell the whole story for Menke.

“It’s hard to get frustrated when you know you’re still playing as hard as you can,” she said following a game at Ridder Arena in Minneapolis. “I guess it’s a little frustrating when the bounces don’t go your way. I think we’re still having fun. If anything, we’re still growing as a team.” 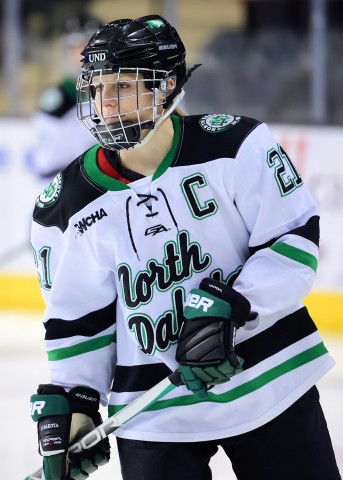 Menke rides the line between not taking things too seriously and having an understanding of what is actually important. She’s able to see the forest for the trees even just moments after a loss, and this kind of levelheadedness is disarming. “I know even if I can just help out the younger players for the upcoming years, it’s still a victory for us,” she said only minutes removed from a loss to a team she calls their biggest rival. That’s also a team she was intimately familiar with growing up. “I’m not going to lie,” she said, “I’ve been to a few Gopher games as a kid.”

She is undoubtedly helping the younger generation. She’s frequently skated on a line with a pair of freshmen that includes Emma Nuutinen and the team’s leading scorer Ryleigh Houston. “I knew a lot of the pressure would be on us upperclassmen for the offense of the team because you know a lot [of freshmen] take until Christmas to really get in the groove of college hockey,” Menke said.

Her calm even surfaces while talking about her senior season, where the second half of the year can serve as an informal farewell tour to four years of college hockey.  “I know here [at Ridder], hopefully, we’re coming back for the playoffs. But it’s weird every time you play one of your friends. You’re like, ‘Well, that might be the last time I play them.’ It’s fun and it’s sad, but it’s kind of cool at the same time.”

With a berth in the Final Face-Off assured, the conference’s top four teams will be competing and being the bottom ranked of those four teams doesn’t faze Menke. “We know no team wants to take us in the playoffs,” she said. “No one wants to battle us because we fight hard and we compete hard. Teams don’t like to play us, I know.”

Their hopes for a NCAA berth go through the WCHA championship and at least two of the top five teams in the nation. Yet, they’re undoubtedly a team capable of surprising. It’s always a possibility with leadership like Menke, Canadian national team defenseman Halli Krzyzaniak, Gracen Hirschy, senior goaltender Lexie Shaw, and other upperclassmen who are leading the way this year and laying the groundwork for the program’s future success.