Minnesota drops another at home as Ovechkin scores twice 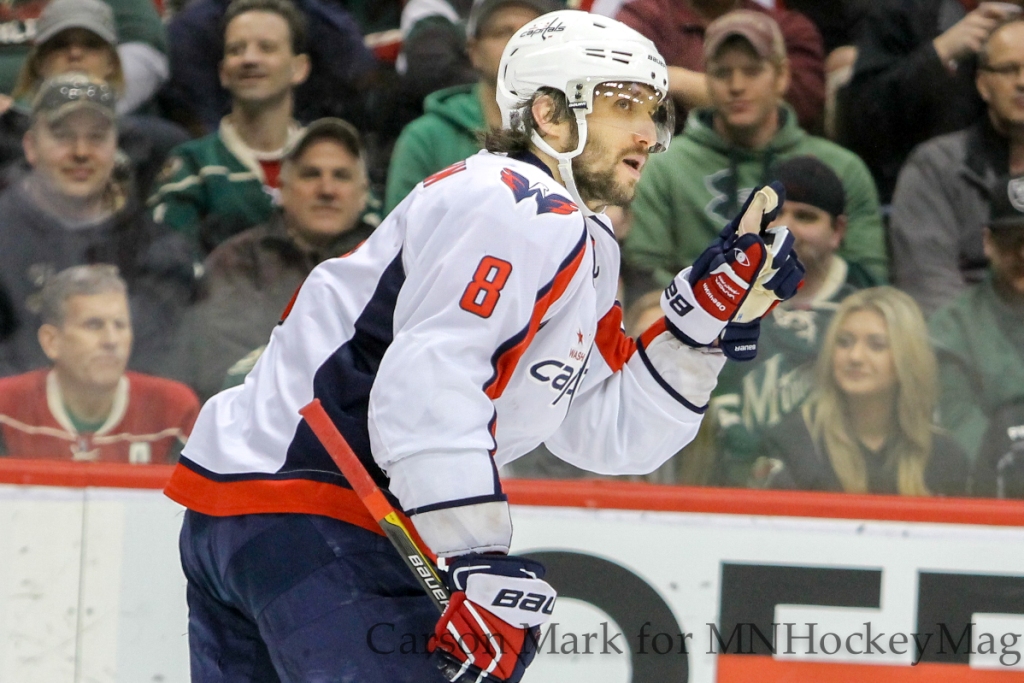 Minnesota drops another at home as Ovechkin scores twice

St. Paul — The Minnesota Wild have recently made an art of falling behind in games only to stage dramatic rallies late to snatch victory from the jaws of defeat, including a recent 2-1 road win over the Washington Capitals.

It stands to reason, though, the practice would eventually catch up with the Wild and it did when the Capitals dropped by for a visit on Thursday night.

Goals by Alex Ovechkin and Evgeny Kuznetsov 39 seconds apart in a late second-period 4-on-4 situation put the Caps up 2-0 helping to lift Washington to a 3-2 win over Minnesota in front of 19,044 at Xcel Energy Center.

Caps’ goaltender Braden Holtby made 28 saves and Ovechkin scored twice — his league-leading 46th and 47th goals of the season — to lead Washington to its first-ever regulation win in St. Paul (1-7-1). The Florida Panthers now stand as the lone NHL team without a regulation victory at Xcel Energy Center.

“I think we did a really good job [on Ovechkin] for most of the night,” Wild coach Mike Yeo said. “But certainly that 4-on-4 was a key moment in the hockey game. We’re 0-0, I felt we were going pretty good, the next thing you know you’re down in a 2-0 hole, it changes the game.”

Ovechkin’s right circle blast directly off of a Nicklas Backstrom faceoff win at 3:05 of the third period gave the Capitals a 3-1 lead and ultimately proved to be the difference.

“His shot’s lethal,” Wild forward Chris Stewart said. “He probably has one of the best releases in the league so anytime you lose that faceoff clean there, in a split second it’s already in the back of the net.”

Winners of a franchise-record eight straight games on the road, the Wild have now lost four of their last six at home with the silver lining being they’ve all been decided by a single goal.

“I find that in a lot of these games we’re making one big mistake or there’s a couple breakdowns that we’re making that we haven’t been making on the road lately,” Yeo said. “I look back at our last two losses and we only have one 5-on-5 goal in our last two games so that, to me, is probably the big reason why we’re winless in our last two here.”

In a matchup of the NHL’s best penalty kill against the league’s top power play, the Wild prevailed in keeping Washington scoreless in four power-play opportunities. Minnesota has now killed off 64 of its opponents’ last 67 chances (95.5 percent) with the man advantage in its last 25 games.

Ovechkin broke open a scoreless stalemate through most of two periods with his league-leading  46th goal of the season at the 15:25 mark. With the teams skating 4-on-4, Ovechkin’s shot from the top of the left circle was stopped by Dubnyk but the speedy Russian followed his shot and beat Wild defenseman Ryan Suter to his own rebound for a 1-0 Caps lead.

Shortly thereafter, Kuzentsov doubled the Washington lead when he picked the pocket of Minnesota defenseman Jonas Brodin in the low slot and faked to his backhand before wrapping a forehand shot around a sprawling Dubnyk at 16:04.

“They capitalized on one of the few little hiccups we had tonight and all of a sudden it’s a 2-0 game as opposed to 0-0 and it just kind of changed the complexion of everything,” Minnesota assistant captain Zach Parise said.

The two goals in short order came a game after Nashville’s Roman Josi scored twice in 45 seconds to give the Predators a second period lead.

“Those are always key shifts [after goals] and you look at the game that we won in St. Louis and we were on the other side of it,” Yeo said. “You have to be able to brush that stuff off and you have to be able to come back out the next shift and be ready to do the job.”

With time winding down in the waning seconds of the middle frame, Folin saw an opportunity to join the rush with Zach Parise and Mikael Granlund and made the most of it. Folin’s received Granlund’s pass in stride below the dots and snapped shot between Holtby’s legs with 8.2 seconds remaining to cut the deficit to 2-1.

Spurgeon netted his ninth of the season on the power play with 5:56 remaining and Minnesota made a strong push for the tying goal in the final minutes but Holtby and the Capitals survived this time.

“Tonight we weren’t that far off,” Yeo said. “The game could have taken a much different turn many times along the game and it was a close game, but we’ll just look to bounce back in the next one.”

The next one comes Saturday in a 1 p.m. matinee affair at Xcel Energy Center against David Backes, TJ Oshie and the crew from St. Louis.

Nearly two years to the day since his last Xcel Energy Center appearance, former Gopher Nate Schmidt spread out 11:19 of ice time over 17 shifts, fired one shot on goal and blocked one for the Capitals in his first game in St. Paul as a pro.