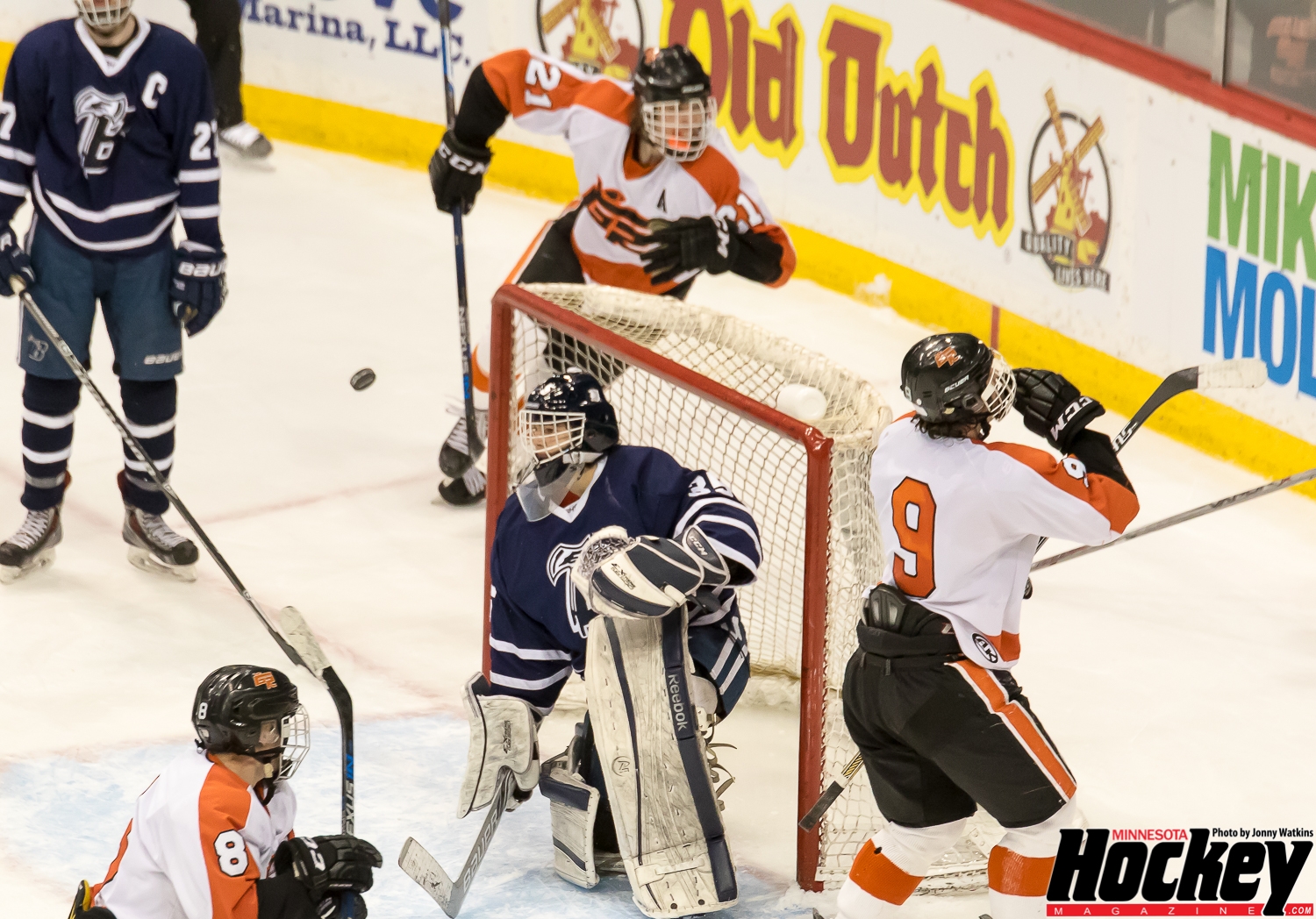 St. Paul — If there’s one thing Bemidji and Grand Rapids learned from their Class 2A Boys’ State Hockey Tournament quarterfinal clash on Thursday night it’s that timing is everything.

And Thunderhawks assistant captain Alex Adams’ timing has been spot on over the last seven days.

A week to the day after scoring a dramatic game winner in the final seconds of Grand Rapids’ Section 7AA final comeback win over Duluth East, Adams scored the winning goal 2:06 into overtime to give the fourth seeded Thunderhawks a 3-2 win over No. 5 seed Bemidji at Xcel Energy Center.

Adams admitted he’s been living a dream the last week.

“It’s been a couple of really big goals, probably the biggest of my career,” Adams said. “It’s been a really fun week.”

Bemidji forward Alex Pollack’s goal 16 seconds into the third period created the tie which led to overtime  but first-year Grand Rapids coach Trent Klatt said there was no panic on the Thunderhawks bench.

“We’ve been in situations like that,” Klatt said. “We were down two goals to Duluth East a week ago and we’ve got Alex Adams on our team so we’re fine.”

But as much as Adams was enjoying the moment he knows it wasn’t all his doing.

“The last couple games I’ve gotten pretty lucky with coming up with the big goal,” Adams said. “But at the end of the day it’s all a team effort to get down to that goal anyway.”

A berth in the state semifinals nearly turned on a less-than-17-second stretch bridged by the second intermission. The Lumberjacks (23-3-2) took advantage of the opportunity but it wasn’t enough to squeak by the Thunderhawks (22-6-1) who advanced to a Friday night meeting with top seed Eden Prairie.

With Grand Rapids leading 2-1 in the waning seconds of the second period, Thunderhawks junior forward Micah Miller corralled the puck in the neutral zone, fought through a check along the left wing boards and cut hard to the net.

“I was screaming at him when he went by the bench,” Klatt said with a grin. “I told him he had four seconds. That was plenty of time for him to get to the net.”

“Micah’s got speed that not many guys in high school hockey have ever had,” Klatt added. “Anytime he decides to go, he can beat anybody at any time.”

Miller’s shot shot went in as the horn sounded to end the period to give Grand Rapids what appeared to be a 3-1 lead right in front of the Thunderhawks’ student section.

“I just knew there wasn’t a lot of time left and I just tried to go wide and get to the net,” Miller said. “I thought it went in before the horn but I guess it didn’t.”

Although the nearest official signaled it a good goal, the so-called lead was short lived as video replay definitively showed time had expired before the puck crossed the goal line.

Seconds later, of game time, Pollack’s goal turned what had briefly appeared to be a two-goal lead into a tie game.

Bemidji coach Wade Chiodo said the bullet-dodging sequence did not even come up during the intermission.

“We didn’t even talk about the goal getting waved off, to be honest,” Chiodo said. “We just went in there and talked about ourselves and what we needed to do as a team and this team has handled adversity very well this season.”

“It’s a testament to the guys in our room,” Klatt said. “They never quit, they never give up, and they compete right to the end and that’s what we, as coaches, ask of them.”

That the game ended the way it did came as no surprise to either coach as the two northern powerhouses met in a Nov. 24 game at Grand Rapids which ended in a 1-1 tie.

“We knew what they had, they’re pretty powerful up front,” Chiodo said. “We knew that we had to clog it up and make them go 200 feet and take advantage of any opportunities we had. We did that some of the game but not all the game and that was the difference.”