Alex Stalock is having a blast playing for hometown organization 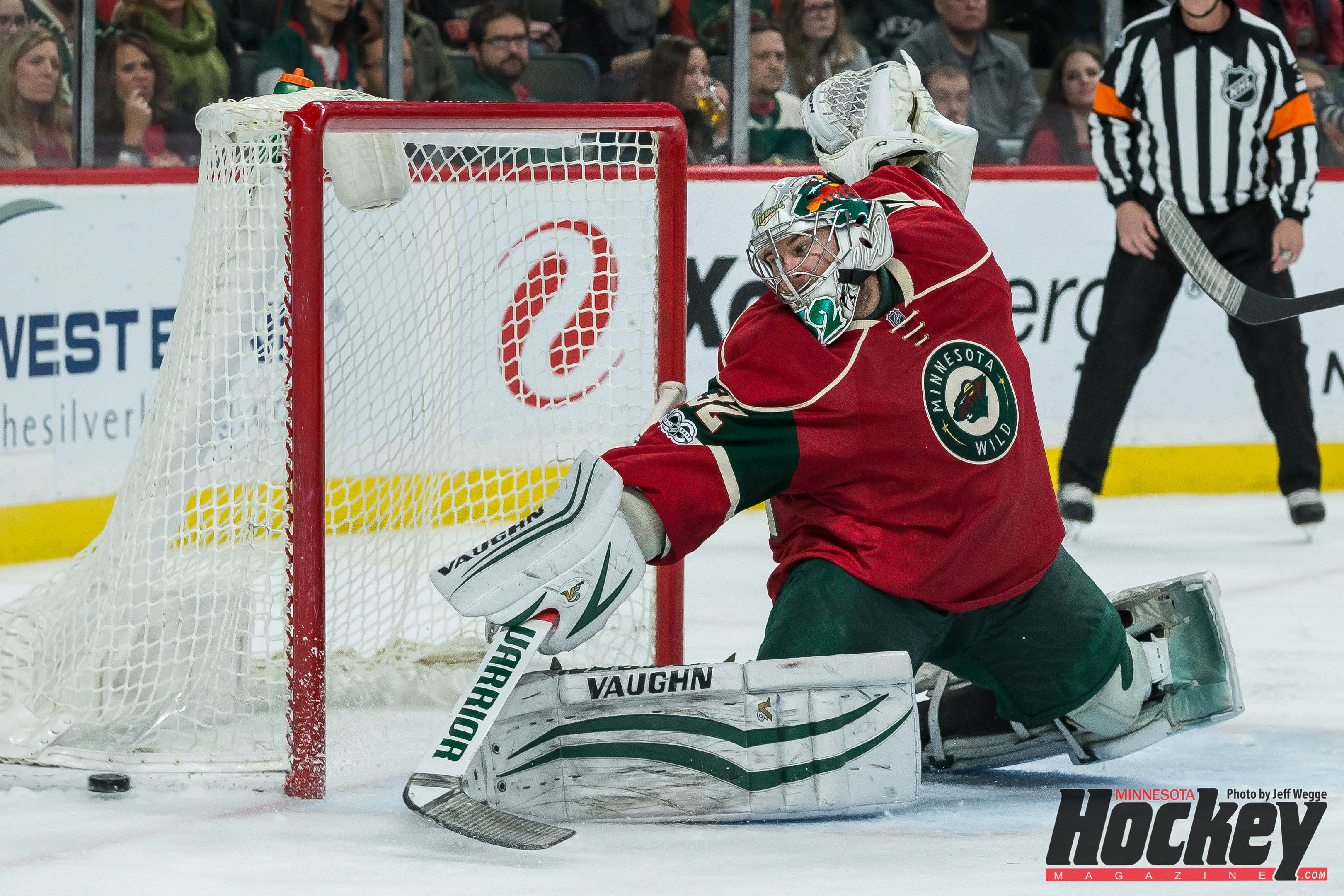 Alex Stalock is having a blast playing for hometown organization

SAINT PAUL — Playing in the National Hockey League is nothing new to Alex Stalock, but strapping on his goalie pads for his hometown NHL team certainly is.

Prior to making his first start in a Minnesota Wild uniform in an arena just minutes from where he grew up, Stalock, a South St. Paul native, admitted to being both excited and nervous.

“Obviously, the team they have in this room and to be able to play behind them is pretty special,” said Stalock after skating with the team on Thursday morning. “I think anybody would lie if you’re not nervous going into every game. You want to do your best every game and I think if you don’t have nerves you don’t have the competitive juices flowing.”

Minnesota recalled the 29-year-old former University of Minnesota Duluth star was recalled from its American Hockey League affiliate in Iowa Wednesday and was immediately named the starter for Thursday’s game against the Ottawa Senators.

Stalock, who said sleeping in his own bed on Wednesday night “was a treat,” was thrilled by the chance to perform so close to home.

“Playing for the hometown team is [something] not many kids get to do from Minnesota and it’s a pretty special chance,” Stalock said.

Stalock did not disappoint in his hometown NHL debut stopping 18-of-19 shots to backstop a 5-1 Minnesota win and snap the Wild’s four-game losing streak. It marked Stalock’s first NHL victory since a Jan. 12, 2016, win for San Jose at Winnipeg.

Wild No. 1 goalie Devan Dubnyk served as Stalock’s backup while Darcy Kuemper did not dress for the game.

“I was just actually saying that to Doobs, I don’t know when my last win was in this league,” Stalock said. “It’s been a while and the guys made it easy tonight. I just made the routine saves. It was fun to be a part of again.”

Stalock led the team out of the tunnel and was given the obligatory solo lap by his teammates before they joined him on the ice.

“Yeah, I don’t know, maybe I walked out too fast,” Stalock said. “Usually, I walk pretty fast, but maybe Mikko (Koivu) was taking his time.”

Ottawa scored first at 16:20 of the first period on Mike Hoffman’s goal just as a penalty to Nino Niederreiter expired.

“You don’t want to give up a goal, but when you give one up, it’s kind of a wake-up call, it’s time to go kind of thing, Statlock said. “From there, I settled in and stopped the shots from the outside, so it was good.”

Stalock and the Wild’s team defense shut down the Senators from that point as Minnesota score the final five goals of the game.

“We did a great job coming back, obviously, five unanswered, the way we played and eliminated their chances, other than a few power-play chances,” Stalock said. 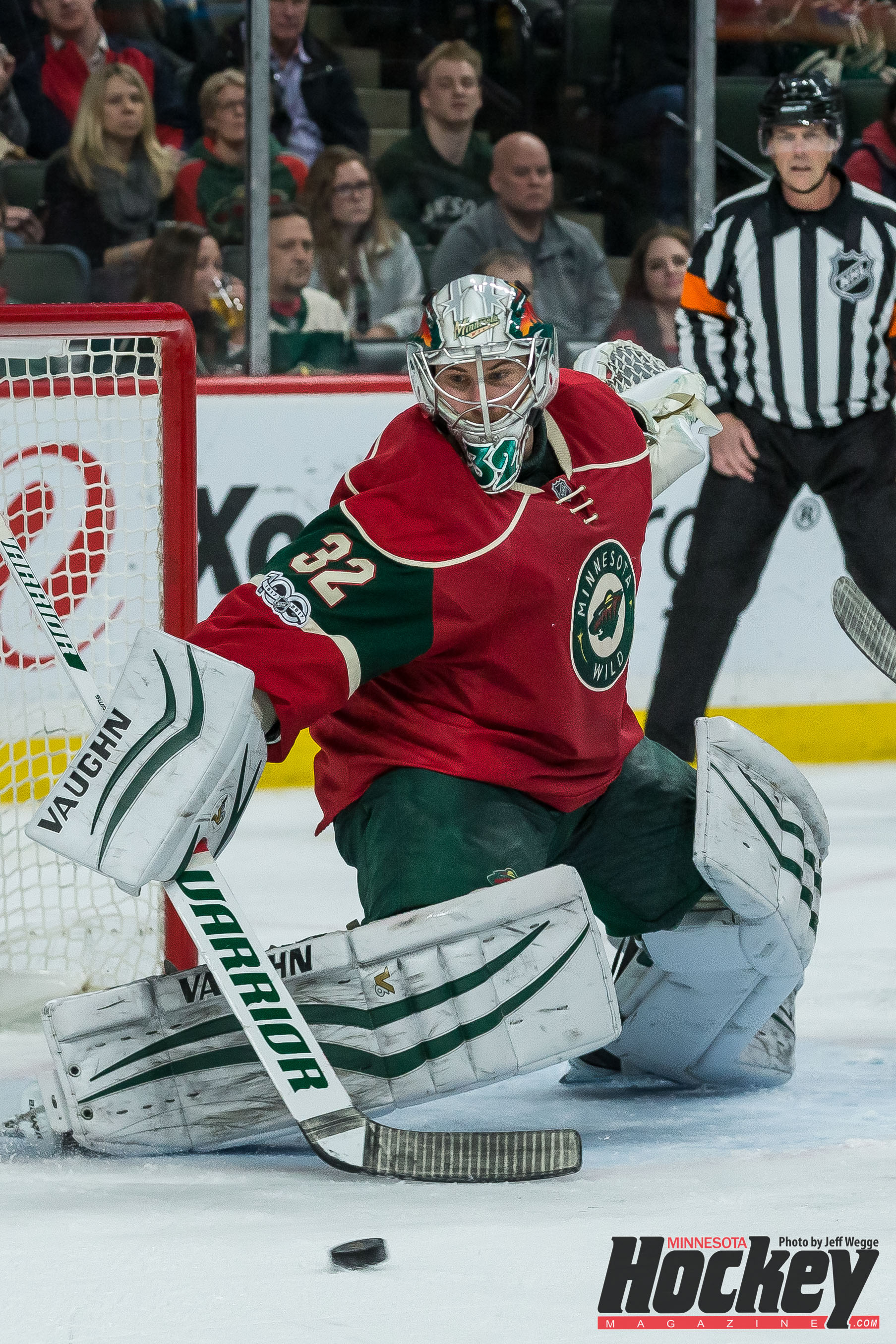 The 6′ 0″, 187 lb. Stalock, who said he was caught off guard by the promotion, has rebounded from a slow start to seize control of the starting role for an Iowa team in the hunt for a playoff spot.

“Alex has done a great job down in Iowa, two shutouts in the last week,” Boudreau said after Thursday’s morning skate. “He was sick early in the season but, right now, he’s one of the better goalies in the American Hockey League, he’s playing every day so he’s feeling it.”

“For a goalie, it’s crucial to play back-to-backs or games consecutively and get some confidence and roll with it,” Stalock said. “To get in there every night and, say you don’t have a good night, get back in there and get another chance to fix it, it’s been beneficial for my game and I’ve taken it and run.”

“We’ve got a good thing going in Iowa and we’re making a playoff push there as well,” Stalock said. “It’s been a blast down there playing this year with a good group.”

After a brief stop in the Maple Leafs organization following a late-season trade, Stalock signed a one-year, two-way contract with Minnesota last summer. On Feb. 2, the Wild signed Stalock to a two-year, $1.3 million extension.

Minnesota coach Bruce Boudreau said getting Stalock some NHL playing time has been in the team’s plans for a while.

“We’ve signed him, he’s gonna be with us the next two years, whether it’s here or in Iowa so we thought this was a good time to do it,” Boudreau said. “Duby looks tired and Kuemps wasn’t getting enough reps to make him sharp so, hopefully, this will work and work out for us.”

Stalock is all too familiar with the challenges faced by a backup goalie in the NHL making it easy to sympathize with Kuemper.

“Any goalie that’s penciled in as a backup in this league, they understand it,” Stalock said. “It’s tough when the guy ahead of you is playing so well and then when you go in you’re expected to be lights out to get your team a chance to win. It’s not easy and, being through it, it’s a hard position to be in.”

Drafted by San Jose in fourth round (112th overall) of 2005 NHL Entry Draft, Stalock’s NHL debut came in in a 5–3 Sharks victory over the Phoenix Coyotes on Feb. 1, 2011. Playing in relief of Antti Niemi, Stalock stopped all nine shots he faced to record his first NHL win.

Three days later, however, after being returned the the AHL’s Worcester Sharks, Stalock was stepped on by a Manchester Monarchs player, severing a nerve behind his right knee. Surgery and subsequent rehabilitation cost Stalock nearly an entire calendar year.

Prior to that, Stalock led South Saint Paul High School to the 2004 Minnesota Class A State Hockey Tournament where he was named to the All-Tournament Team.

Stalock then went on to play three seasons at the University of Minnesota Duluth (2006-09) where he led the Bulldogs to the WCHA playoff championship and the NCAA West Regional Final in 2009 before signing on with San Jose.