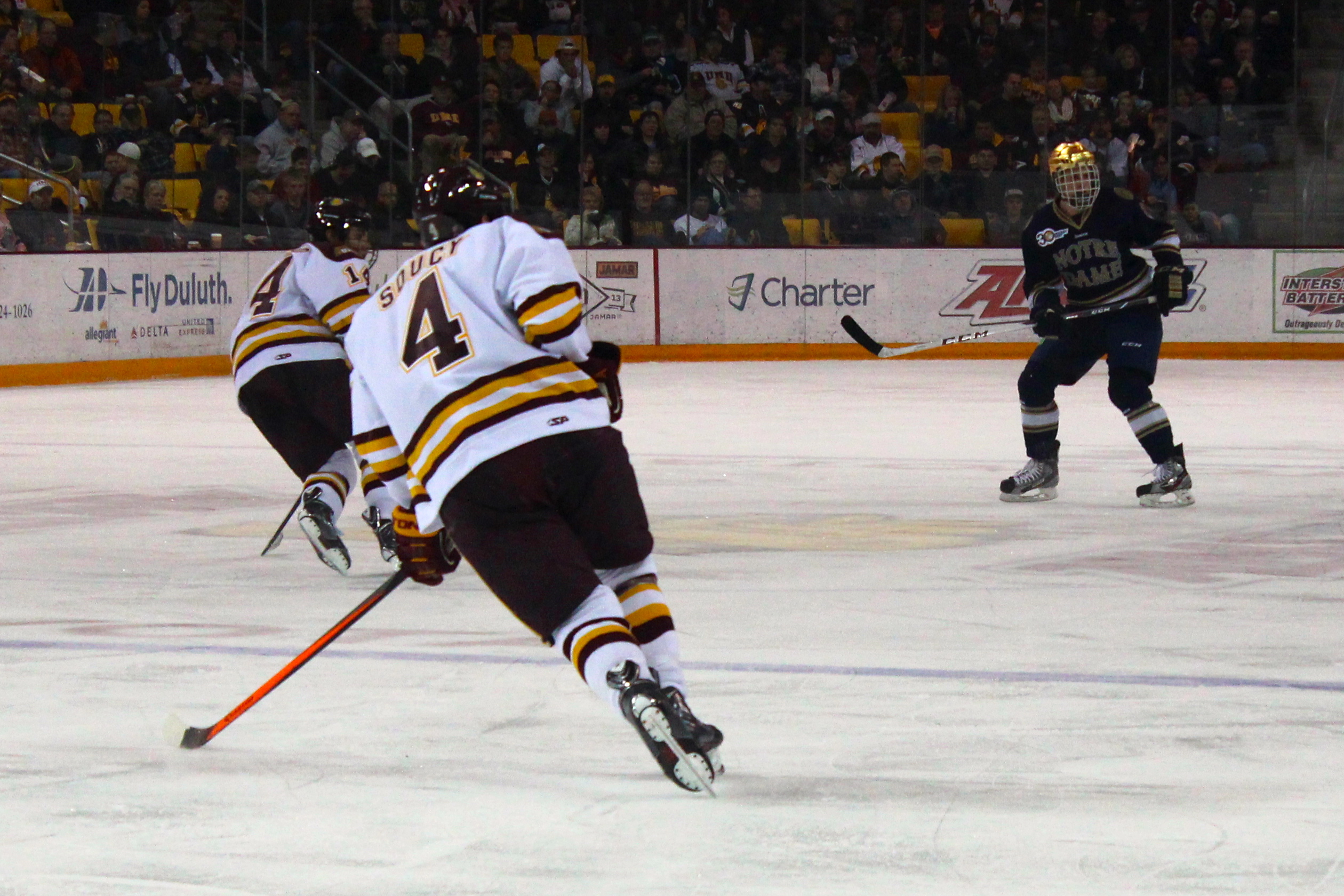 He’s a 6-foot-4-inch force to be reckoned with, a nightmare for a small player with unsteady blades beneath him. For Minnesota-Duluth, he is a defenseman who is going to work for his team night in and night out and, for the Wild, a developing threat to future NHL opponents. UMD defenseman Carson Soucy, selected in the fifth round, 137th overall in the 2013 NHL draft, is turning heads and coming into his own as a professional prospect any team would be happy to have in their system.

In a season where it’s almost impossible not to notice the surge in young players making an impact within the NHL ranks, Nathan MacKinnon, Sean Monahan, Seth Jones and the Minnesota Wild’s Charlie Coyle just to name a few, some fans may find it easy to forget that not every player is going to walk off his junior squad and be ready to fill a nightly role with an NHL club. Carson Soucy may not be quite there yet, but if the freshman player UMD head coach Scott Sandelin refers to as “a pleasant surprise” continues to build his game at such a rapid pace throughout the NCHC season, don’t be surprised to see him become a regular presence on the Minnesota Wild’s blue line for many years to come.

As Soucy moved from the Alberta Junior Hockey League into being not only a member of the UMD squad, but also a NHL draft pick, questions arose as to whether or not the defenseman was going to be able to offer up enough of an offensive threat to be the kind of player required by the highest levels of hockey in North America. Coach Sandelin put those doubts to rest following a non-conference game against Notre Dame on Friday night.

“He’s a big kid who has good hands and he can skate, he’s got a lot of plays and we’ve seen that through a lot of these games,” said Sandelin. “I’m not saying he’s going to be Paul Coffey (for those unfamiliar with Coffey, he’s long been held as one of the NHL’s all-time best offensive defensemen, arguably second only to Bobby Orr), but he certainly does a good job moving pucks.” In the past three games Soucy has notched up three assists and in preseason exhibition play scored a goal for the Bulldogs.

“I think he’s improved every week, there’s no question about that,” said Sandelin. “You never know with freshmen where they’re going to start, but I think he’s had a real good start.”

If the seasoned coach’s opinion of the player isn’t enough to convince onlookers that Soucy is the real deal, Soucy offers up reassurance of his own. “There’s not a lot of down time in college hockey, if I’m not at school I’m putting in a lot of work at the rink,” Soucy said. “I’ve been working on my shot, getting that stronger and I’m getting more confident out there (on the ice).”

“Obviously size is a big thing and lots of NHL teams are looking for big players who can also skate,” said Soucy. “If you’re a big player but you can’t skate you’re not going to be able to do much, but I think size is an advantage.”

The Alberta native grew up in a small farming community, a student of the game raised–similar to many Minnesota kids–on frozen ponds where the game of hockey is a part of life and he seems to be having no problem fitting in around northern Minnesota.

“I like Minnesota overall, I could stay here forever,” said Soucy and Minnesota fans everywhere should sure hope he does. 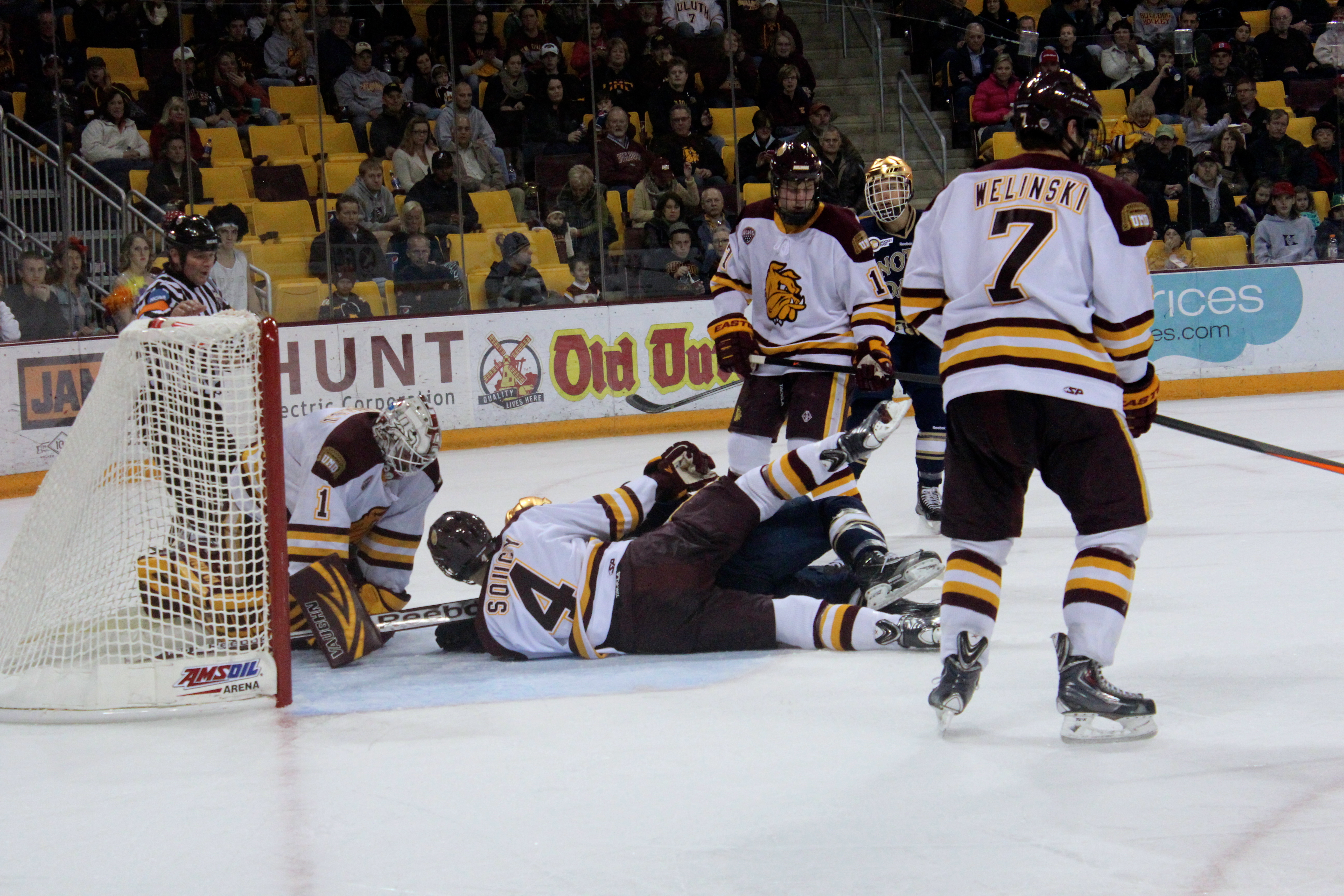 Twitter – @DrSouce71 (Get it? Dr. Seuss? Carson certainly has a sense of humor!)

NHL Affiliation – Selected in round five of the 2013 NHL entry draft, 137th overall by the Minnesota Wild

Pre-game Meal – Chicken and pasta at Blackwoods which is “Really good!”

Something not a lot of people know about him – Carson likes to dance when he can! (Unfortunately we failed to asked whether or not he knew how to drop it low or twerk, maybe next time!)

**Remember to follow @MNhockeyMag on twitter for all of our latest stories, updates, in-game action for your favorite Minnesota Hockey team and events! You can also follow the author of this article @AmySnow17!