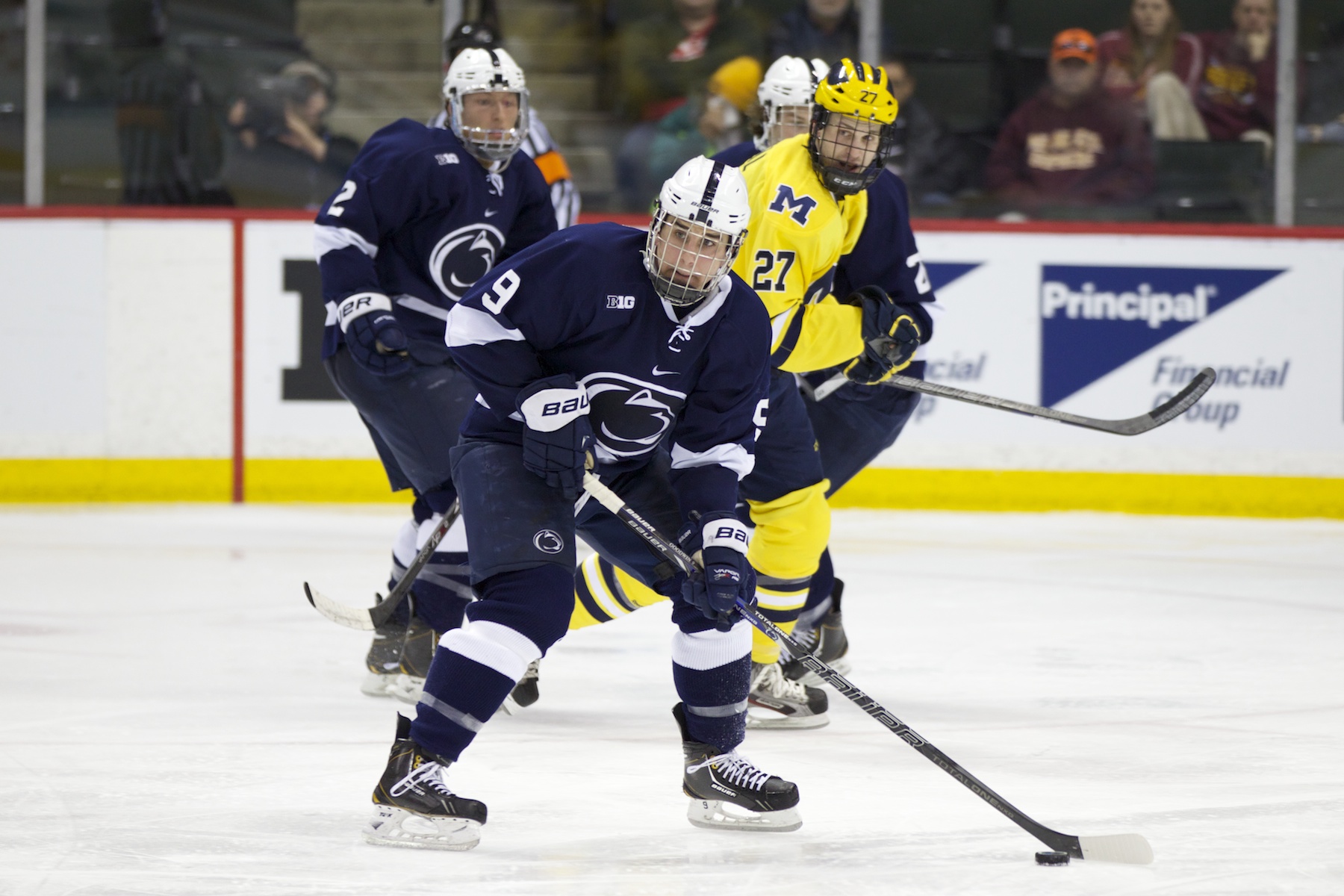 SAINT PAUL—The Big Ten Men’s Hockey Tournament made its debut in grand style as Michigan and Penn State took over 90 minutes to declare a winner on Thursday afternoon at Xcel Energy Center. Zach Saar’s goal at 12:47 of the second overtime vaulted the No. 6 Nittany Lions over the third-seeded Wolverines 2-1 and into a Friday afternoon semifinal date against No. 2 Wisconsin.

With a faceoff in the Wolverines zone to the left of Michigan goaltender Zach Nagelvoort, PSU freshman center Dylan Richard won the draw and tied up his man long enough for his rookie linemate, Saar, to secure the loose puck and fire a wrist shot through traffic, beating Nagelvoort short side.

Saar, who grew up in Michigan, said just being on the ice with Michigan has special meaning for him but added scoring the game winner against them is, “a dream come true.”

Nagelvoort said he never saw the shooter or the puck and that he, “went down to cover, and the next thing I knew, it was in the net.”

The loss puts Michigan squarely on the outside looking in where the NCAA tournament is concerned but the Wolverines can still get in with the right amount of help.

“We’ve been on kind of a bubble here the last few weeks,” Michigan coach Red Berenson said. “We didn’t help ourselves tonight.”

Despite the low score, the goaltenders were busy in this one with the teams combining for 118 shots, including 51 in the overtimes alone.

Each goaltender posted career-high saves totals with Penn State’s Matthew Skoff backstopping the win with 52 saves while Nagelvoort turned aside 63 of 65 Nittany Lion shots. His previous career best of 39 saves also came against PSU on Feb. 21.

“He gave us a chance all night,” Berenson said of Nagelvoort’s performance. “He kept the game close when we were at our worst and gave us a chance. So I liked his game.”

Michigan and PSU were scoreless through the game’s first 39 minutes before Penn State’s Luke Juha’s long pass sprung Taylor Holmstrom for a breakaway and the eighth goal of the season for the Mercyhurst transfer at 19:37 of the second.

The slim lead held up through the midway point of the third but the Wolverines would not be kept off the board in this one. Phil Di Giuseppe notched his 13th of the season at the 11:06 mark to, ultimately, send the game to overtime.

Gadowsky said the game was an example of the amount of heart his team possesses.

“I really like the fact that we were playing an excellent game and we allowed them to tie it up relatively late,” Gadowsky said. “I don’t think our demeanor changed that much [after that].”